For years, bodybuilders and health-conscious men have looked into ways to optimize natural testosterone production.

One of the things that have gained quite some interest, has been some specific foods that boost testosterone levels. And it has been already well-proven that:

We also know that there are specific foods that contain a good balance of micronutrients and other co-factors, making them good options for a testosterone boosting diet…

Well, as outlandish as it may sound, there are some: 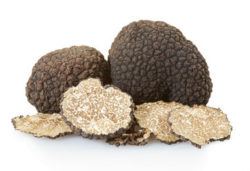 A few months ago we were contacted by some researchers for the possibility of selling truffle extract here.

At first, the idea seemed really weird, but then they presented some interesting evidence as to why truffles could potentially increase testosterone levels.

Since truffles are a natural source of androgens (they contain small amounts of testosterone and androstenol, which is what attracts the pigs to find them underground), few studies have examined – in animals – that when truffle extract is sniffed and it enters the androgen receptors within the nasal cavity, it triggers the olfactory system to actually stimulate GnRH release from the hypothalamus and thus eventually increases testosterone production1.

Testosterone is known as “the hormone of desire” and finding it in truffle now presents credible underpinning to the notion of an aphrodisiac effect from truffles.Dr. Moshe Shifrine

There’s this patent about truffle use in stimulating testosterone production that can be found from Google1. It mentions a study where 10 human males were administered a small amount of truffle extract (ground truffles prepared as alcohol extract) on the top lip daily for 2-weeks to see if this could potentially trigger the production of testosterone. Surprisingly, it did, as you can see from the graph below.

Are the results legitimate? Who knows. To me, the increases – even the starting baselines – of the subjects free-testosterone seem high to me, and certainly, these results are far from being peer-reviewed. On the other hand, there’s previous research suggesting that the olfactory bulb can be stimulated by pheromones and hormones and that 1 gram of truffle contains roughly 1,7ug of testosterone, so this ideology isn’t all that crazy.

What is crazy though, is the price of truffle extract. The claims made in the patent got me interested enough to look into truffle extracts from Amazon for a little test-run until I found that a measly 4oz bottle of the stuff has a massive price tag. 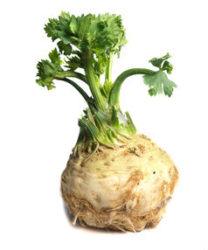 It’s touted that eating few stalks of celery used to be a close-circle secret of male adult movie stars to enhance their volume of loads.

The basis of this comes from the fact that celery contains two natural androgenic pheromones; androstenone and androstenol.

When chewing celery, those pheromones would then trigger similar olfactory bulb response as theorized with truffles above. There isn’t any actual research into celery doing this, it has only been shown that some pheromones are in fact pretty potent at stimulating testosterone synthesis.

Celery is commonly known as aphrodisiac food, and it likely does enhance sexual health due to its nitric oxide boosting abilities (it’s dense in naturally occurring nitrates), and there’s also claims that the famous old ladie’s man – Casanova – consumed celery for its aphrodisiac effects2.

But is it a natural steroid?

Well, at least it’s a natural source of andro-pheromones, which could potentially stimulate T production. But again, there’s no research behind celery, so it might as well do nothing at all. 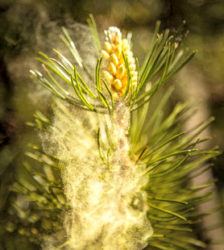 Pine pollen is the most potent known source of naturally occurring phytoandrogens.

According to a study by Saden-Krehula et al3. the pollen from Pinus Sylverstis, contains 80ng/g of testosterone, 110ng/g of epitestosterone, and 590ng/g androstenedione, these are not mimics, but the very same hormones that are naturally produced by the human body.

Considering that the average male has ~500ng of testosterone per deciliter of blood, the amounts found in pollen are actually quite high for a food source.

How good is the absorption of these androgens? I simply do not know. When consuming the powder orally, the gut and liver might (I could be wrong too) deactivate the hormones all together, which is why another possible route of absorption could be as pine pollen tinctures, which – when swirled around in the mouth – absorb straight into the bloodstream through the mucus membranes of the mouth.

If you do give a shot at pine pollen powder or pine pollen tinctures, do remember that there isn’t currently any research available on their actual hormonal effects in the body.

We only know that pollen is a natural steroid source, aka. anabolic food.

Are there natural steroids? Yes. Are they as effective as steroids used in the bodybuilding world or TRT? Absolutely not.

I have seen a lot of people confused about this, and really, there’s no single food source that could ever come close to the actual use of steroids. Not now, not ever.

These foods are simply sources of androgens and/or anabolic activity. They may support natural hormone production and anabolism, but you must not imagine that they could actually be comparable to injectable roids…

…And even when talking about natural methods of increasing testosterone, total caloric intake, and the ratios of protein, carbohydrate, and fat have far more significant effects than say, eating celery or snorting truffels would ever.