Erection problems are one of those silent health hazards that are rapidly increasing all around the globe, especially in countries where obesity, poor nutrition quality, and lack of exercise are key attributes of the population.

And hey, maybe you don’t have any issues in the first place, but who wouldn’t like the extra circulatory boosts that natural PDE5 inhibitors and nitric oxide boosters can give?

Chances are that if you have problems with erection strength all the time or occasionally, and you go to a doctor for help, you’ll likely leave with a prescription erectile dysfunction supplement to Cialis or Viagra. While both of them do work extremely well, they are also:

Like so many of the modern-day pharmaceutical erectile dysfunction supplements, they’re just a mean to mask the real problem with a somewhat of a “robotic erection”.

There’s nothing natural in needing a drug for getting your battle-sword up, although it’s completely understandable that many men would rather get all the help they can before facing embarrassment in the bedroom.

What if you forgot the prescribed magic-pill somewhere for example?

And what happens when you have poked with the assist of a blue-pill for years, then develop side-effects and have to discontinue the use?

Let me give you a hint: nothing good (at least that is if you haven’t focused on fixing the root issues of your problem).

I would recommend that you start by fixing certain health and lifestyle factors (sleep, exercise, weight-loss, etc) before jumping head-first into using any circulation enhancing supplements, we even have a popular article about foods for improved erectile health.

There are 7 (yes, seven!) natural penile health supplements that are alternatives to synthetic pharmaceuticals, and all of these are proven to work with multiple scientific studies.

Use them strategically while also doing these things to optimize your overall hormonal and vascular health and I can guarantee you that you’re not going to need any pharmaceutical aids after that. 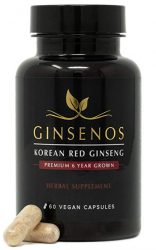 Ginseng has been titled as the “natural Viagra” due to its impressive results in multiple scientific trials.

While I can guarantee you that ginseng is nowhere near as potent as synthetic Viagra is, the benefit is that it’s all natural, costs just a fraction of the price, and actually works unlike many other natural erectile dysfunction supplements out there.

The roots of ginseng are best known as “adaptogens,” a blanket term coined by the scientist in Soviet Russia for identifying compounds that can promote the body to adapt into stressful situations and maintain the bodily homeostasis naturally by balancing stress and steroid hormones.

The theorized reasoning for these effects is often claimed to be the high amount of phytonutrients (mainly ginsenosides) and antioxidants found in the roots.

While the evidence on ginseng’s ability to increase testosterone levels is mixed (raising the hormone on infertile men1, but not on men with no infertility2), the research behind its erection promoting effects is stronger than a steel pipe.

In a Korean double-blind placebo study3, 900mg’s of ginseng is taken 3 times per day for 8-weeks was able to significantly improve erectile quality of subjects with clinically diagnosed erectile dysfunction. These effects were noted by a questionnaire, as well as RigiScan measurement (yes, that’s an actual device that measures erection quality).

Another study conducted five years later found similar results with 1000mg of ginseng taken 3 times per day, across the board patients receiving the ginseng had noticeably improved their quality of erection rigidity, maintenance, and penetration efficacy2.

In a research-study of ginseng saponin’s, it was also noted that ginseng has the ability to significantly improve erection quality when compared to a placebo solution. This time the researchers used another erection strength monitoring device called “AVS-penogram”4.

The underlying mechanism of ginseng’s actions is not fully understood, but its likely a combination of multiple compounds (saponins, antioxidants, ginsenosides). What has been seen in animal studies is that many of the ginesonides have the ability to raise nitric oxide levels in the blood, and thus widen the blood vessels and improve circulation. 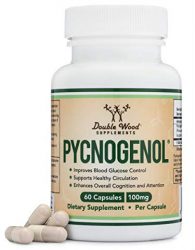 Pycnogenol is a patented water-extract of the bark of the French maritime pine tree.

And that is the mechanism of how Pycnogenol works as an erectile dysfunction supplement. It is used to improve erection strength and the promotion of arterial relaxation with a boost in nitric oxide.

Three months into the study, 92,5% of the test subjects reported that their ability to regain erections had returned5.

In 2003, another group of researchers replicated the study with similar results using 120mg’s pycnogenol with 21 subjects6.

In 2007, 180mg’s of pycnogenol was found to increase arterial expansion of young male subjects by a staggering 42%7. Another trial noted that in patients with coronary artery disease, pycnogenol significantly improved vascular health and blood flow8. 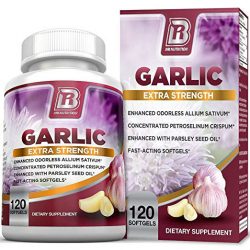 Both garlic and vitamin C have been studied for their effects in promoting blood flow, reducing inflammation, and dropping blood pressure.

The thing that many people don’t know, is that when you combine vitamin C with garlic extract, you can expect massive improvements in your circulation due to elevated nitric oxide production.

This effect was seen in a study concluded by Mousa et al10. when they administered 2 grams of vitamin C in combination with 4 capsules of garlic extract daily for 10-days to their patients with mild hypertension (high blood pressure).

They saw the following improvements; 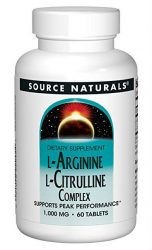 Arginine is an amino acid that acts as a precursor to nitric oxide, citrulline, on the other hand, is also an amino acid (found in watermelons for example), which naturally converts to arginine in the kidneys.

For these reasons, both are generously used in pre-workout supplements to increase the “pump” of the muscles and improve blood flow.

The science behind these compounds is pretty solid, they both seem to very reliably increase nitric oxide output. However, for some reason, citrulline seems to be more potent at this11. Maybe your body converts it into a more potent form of arginine than that of which can be found in arginine supplements, who knows.

Whatever the case, arginine works, but citrulline is just better. 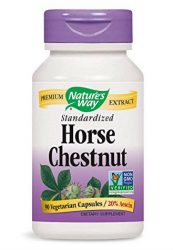 Horse Chestnut Extract (HSE) is often standardized to 10-20% of the active ingredient escin, which has been found to be extremely beneficial for vascular health.

The mechanism at which horse chestnut extract improves erection quality is two-fold. Firstly its ability to increase nitric oxide levels, and secondly it improves the function of the “vascular valves” and thus prevents and relieves the formation of varicoceles (half-blocked veins with poor valve function leading to testicles and thus impairing testosterone production).

The latter mechanism of HSE is particularly interesting due to the fact that roughly 20% of men have varicose veins in their testicles, sometimes noticeable, but often so mild that they go unnoticed.

These veins can be surgically operated, but so far escin (the active compound in horse chestnuts) has been identified as the only compound that has proven research backing up its use as a natural varicocele treatment.

There are three studies which all found that standardized escin is able to significantly “resolve” varicose veins all around the body12–14, and most importantly one which showed that escin derived from HSE was able to reduce the rate of varicoceles and thus improve the sperm counts and testosterone levels of infertile patients15. One study has also experimentally varicoceled rodents just to find out that standardized escin can reverse the negative effects16.

…simply because we feel that improving the valve function and reducing the rate of varicoceles can bring massive improvements to the erection quality of many men who are not aware of the fact that they might have varicose veins, plus it also increases NO production so it was a no-brainer anyway. 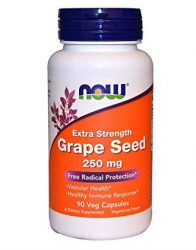 Grape seeds are often extracted to get a standardized amount of the active ingredient; procyanidin. It’s the same nitric oxide stimulating compound that can be found in Pycnogenol.

Aside from increasing nitric oxide, grape seed extract (GSE) has been found to inhibit the activity of the aromatase enzyme, which is an enzyme that converts testosterone molecules into estrogen.

The mechanism of action in grape seed extract makes it a great erectile dysfunction supplement as it can benefit erectile health by boosting nitric oxide and preserving testosterone.

The research behind GSE is interesting. In rats for example, 100mg/kg has been able to increase nitric oxide levels by 125% at rest and 138% after exercise17. Human studies consistently show how GSE increases NO-production and thus reduces blood-pressure, leg swelling, heart rate, and cardiovascular disease risk18–20 . 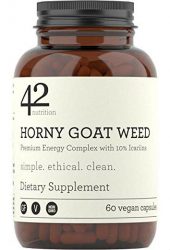 Since icariin is a PDE-inhibitor, one could compare it to Viagra, due to the fact that the mechanism at which sildenafil (the active ingredient in Viagra) works is also PDE-inhibition.

I’m sad to say that when compared to its synthetic relative, icariin is not nearly as potent, but again, it’s natural and a significantly cheaper alternative.

The research shows that when male rats are administered 80mg/kg of icariin, their testosterone levels increase 3-fold21, and this occurs without significant changes in LH or FSH, suggesting that icariin has a direct testicular effect on testosterone production.

When icariin was tested in cell-cultures22, the researchers noted that it was able to inhibit the PDE5 enzymes, thus many supplement manufacturers have started selling it as an aphrodisiac or under the name of “natural Viagra”, again though, icariin is not as potent as the blue pill.

Some other studies have found that icariin can increase the nerve growth and circulation of the pelvic region23, significantly increase nitric oxide output24, and blunt the rise in stress-hormone cortisol25.

I doubt icariin has even remotely comparable effects to Viagra, unless you also make sure that you optimize your lifestyle, body composition, and diet towards healthier erections. If your problems are due to performance anxiety, the stress-reducing effects of icariin might be particularly useful.

Conclusion on The Best Supplements for Erectile Dysfunction

There you go, 7 compounds with science backing up their use as great supplements for erectile dysfunction.

None of the compounds alone might be as effective as Viagra or Cialis, but at least they are natural and don’t require a prescription. There are also no side effects (unless you go crazy and start stacking too many with actual ED medication)