The paleo diet has been extremely popular in these past few years. The idea is relatively simple, just eat like a caveman

More specifically, eat like a human of the paleolithic era, an era which started roughly 2,6 million years ago and ended 10,000 years ago.

The foundation is based on:

What is and isn’t paleo is – as you might guess – heavily debated in the field of paleo peeps. However, since the diet tries to mimic that of a paleolithic human, a person with a sane common sense can easily see that there are food groups that are way too modern for the diet.

According to the “experts”, these foods are to be excluded from the diet:

…Still, most of the “experts” in the field like to state various ratios for carbs, fats, and protein. Most commonly these recommendations are based on low to moderate protein intake, low carbohydrate intake, and high fat intake.

What is also worth mentioning – and often for some reason is left unmentioned in paleo circles – is that the Paleolithic man more than likely went through periods of fasting and feasting, eating whenever there was food available, and fasting whenever there wasn’t (unlike the modern man, who tends to become a cranky bitch if he can’t fulfill his sugar cravings for every 3 hours or so).

To summarise: The paleo is a diet that somewhat “mimics” that of a paleolithic human. Minimal amounts of processed food, with lots of real unprocessed animal protein, veggies, berries, root plants, fruits, and nuts. Excluded from the diet are food groups that humans started to eat after the Paleolithic era, such as vegetable oils, grain-fed meats, refined sugar and flours, and most grains.

On the track of what is paleo? Let’s then figure out what the diet has to offer for natural testosterone optimization:

Testosterone Levels and the Paleo Diet 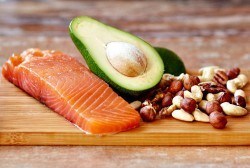 I don’t like to blindly follow any “diet” or “nutrition plan”, especially when it hits mainstream and people around it start forming a cult-like following.

This is something that already happened with low-fat diets, low-carb diets, clean-eating, intermittent fasting, bulletproof-coffee, etc.

And it’s rapidly happening in paleo circles too. When people go crazy over some idea and start following it to a T, it tends to eventually create multiple sub-cultures around the topic, eventually, these “camps” start arguing around about which one is right and which one is wrong.

Anyway, I can’t help but admit that the paleo diet, with minor modifications, might as well be extremely useful for someone who’s looking to increase his testosterone production naturally.

Right of the bat, the idea of eating minimal amounts of processed foods is great for testosterone production. When you eliminate processed stuff, you most often also eliminate the testosterone lowering trans-fats, polyunsaturated fats, pesticides and possible man-made chemicals that act as endocrine disruptors. Eating more whole foods, less processed goo, also provides you with a TON of essential micronutrients for testosterone synthesis.

When the diet is based around grass-fed meats, you get the high-quality animal protein that is vitally important for testosterone production, along with plenty of saturated fat, which is one of the foundational nutrients for healthy T synthesis.

Since the diet also favors avocados, olives, and nuts, you can flood your body with monounsaturated fatty acids (MUFAs), which have been found to be great for testosterone levels in multiple studies (some nuts could be used less though).

If you’re a frequent reader here, you already know that polyunsaturated fatty acids (PUFAs), are known for their testosterone lowering effect. On a paleo-ish diet, you’re avoiding the modern day high-PUFA vegetable oils, which significantly cuts back your overall PUFA intake.

…Balancing the omega-3 to omega-6 ratio more in favor of the omega-3’s, greatly reduces all chronic inflammatory diseases, it’s also likely that it may improve testosterone production via lowered oxidative stress in tissues (balancing the ω3:ω6 ratio is actually one of the ideologies behind paleo, since the paleolithic man was known of having the ratio fairly close to 1:1, whereas in the modern day Western diet it can be as high as 1:25).

…Actually the only negative thing about the “caveman diet”, is the fact that the macronutrient ratios which the gurus have laid out, tend to have too little amounts of carbohydrates. The general recommendation around the circles seem to be something below 20% of daily calories, whereas a more testosterone-friendly approach would be to bump that up to about 40-60% (especially if you exercise), while keeping protein at around ~20-25% (where it usually is any way in the paleo diet), and fat would be lowered to ~25-30%, depending a bit on how you adjust the carbs.

NOTE: The paleo diet is often (rightfully) bashed due to low amounts of scientific evidence on its claimed health benefits. For anyone looking for more of a scientific layout of the science behind paleo for overall health, read this excellent article from Suppversity.

I don’t see myself as someone who follows the paleo diet, but over the years as I have tried to figure out what would be the optimal diet for natural testosterone production, I have come to find out that it’s actually something rather similar than the ideology of the paleo.

You get the animal protein, the starchy carbs, the high SFA and MUFA fats, with low amounts of high omega-6 PUFAs. The diet is rich in minerals and vitamins while being very low in processed junk and man-made chemicals that can have a negative effect on testosterone synthesis.

To summarize, paleo ain’t that bad for someone who strives to increase his natural testosterone production. Just remember to eat enough carbs.