Pesticides and Testosterone: The Impact of Organic Foods

The global average on male testosterone levels is crashing down rapidly, year after year. In a 17 year study with 1,700 men as subjects, the researchers found out that since the late 80’s, the average US men’s testosterone levels have dropped by 1% every year.

In a Finnish study with somewhat similar design, it was seen that men born in the 70’s have roughly 20% less testosterone at age 35 than their father’s generation had at the same age.

Even when the researchers adjust the results according to age, obesity, smoking status, etc. the drop in testosterone still shows up, and there hasn’t really been a conclusion about what is causing this decline that seems to just speed up as years go by.

While the scientifically proven conclusion to the above has yet to be found, many endocrinologists believe that there’s a clear reason behind the global decline in T…

…Increased exposure to man-made chemicals. Many of which act as xenoestrogens and endocrine disruptors in the body.

We’re constantly exposed to them on a daily basis, as they’re hidden in soaps, shampoos, deodorants, house cleaning products, car care products, air fresheners, plastics, preservatives, and so forth…

…The worst offenders though? Pesticides sprayed to conventionally raised foodstuffs, which tend to end up and accumulate in our bodies after consuming the foods laden with such chemicals. 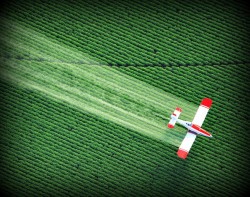 Whenever I mention to someone that I’m mainly consuming organic foods, the response is often as follows:

“Whaaat? Why, that’s more expensive and it’s not at all different or more nutritious than eating conventional produce.”

It’s true that eating organic is significantly more expensive, one doesn’t have to be a genius to see it. Also, the taste is rather similar to conventional stuff. Heck, they are not even that much more nutritious than the conventional produce is.

Yet, I still tend to spend my money on organic foods, rather than the cheaper conventionally grown kind.

It’s because of the stuff that I don’t want into my body; the pesticides, herbicides, insecticides, and fungicides. You know, those man-made chemicals that are sprayed into the crops by people in breathing masks and moon suits.

Some say that there’s no evidence of these chemicals being harmful to hormones or general health as a whole, but that’s where I have to disagree. At least on the hormonal part…

a) In this study, the researchers tested 37 widely used pesticides to see if any of them had any anti-androgenic effects in-vitro. Out of the 37 tested chemicals, 30 were shown to be anti-androgenic. 14 of the tested chemicals were previously known for having a hormone disrupting effect, but the researchers were shocked to find out sixteen more that had no known hormonal activity until now.

b) In this large-scale study, it was noted that 91% of the US test subjects had noticeable amounts of the insecticide; chlorpyrifos, in their bodies. In another human study, TCPY (3,5,6-trichloro-2-pyridinol) which is a metabolite of chlorpyrifos, was noted of having a dose-dependent testosterone lowering effect in multiple linear regression models. Several animal studies have also shown that chlorpyrifos has a significant testosterone lowering effect (study, study, study).

c) In this study, it was noted that RoundUp, one of the most used herbicides in the World, has a direct testosterone suppressing effect in testicular leydig cells at very low environmental doses.

d) In this 2007 study, various pesticides (some of which have been already banned) were shown to be anti-androgenic and mess up with the 5-a reductase enzyme, which is responsible for dihydrotestosterone (DHT) synthesis.

f) Vinclozolin is a common fungicide generously sprayed on fruits and vegetables. According to EPA (Environmental Protection Agency), vinclozolin is a competetive antagonist to androgen receptors, and can activate the receptor similarly to testosterone. However it’s suspected that the chemical doesn’t activate the receptor properly, and hence just “steals” the place from the actual male hormone. Furthermore, two vinclozolin metabolites have been identified as anti-androgens and the chemical is suspected to have feminizing effects in humans. Vinclozolin is also banned in Finland, Sweden, Denmark, and Norway.

g) In this Peruvian study, it was noted that men who work as organophosphate sprayers experience significantly lower testosterone levels and worse semen parameters than control subjects.

h) In denmark, the farmers of organic produce have significantly higher sperm quality and sex hormone levels, when compared to their conventional produce farming peers. Same researchers have also found out that greenhouse workers in contact with fungicides, experience suppressed testosterone levels and reduced sperm quality.

i) In American men, exposure to PCB’s (polychlorinated biphenyls) is strongly associated with lower serum testosterone levels. PCB’s were heavily used in multiple chlorinated pesticides many years ago, but they’re extremely persistent in the environment, lasting for years or even decades in soil and lake sediments, which is why we still continue to get this stuff into our bodies.

The increased use of pesticides greatly benefits food manufacturers, while keeping the costs low for the consumer, which is great…

…However, the increased exposure to man-made chemicals from consuming these pesticide-laden foods, may in fact lower your testosterone levels.

The best way to combat this reduction? Organic foods. Several studies have shown that when switching to organic produce, the levels of man-made pesticides, herbicides, fungicides, and insecticides in urine drop significantly, often all the way to non-existent levels (study, study, study, study).