What if you would get a full nutrition & workout program with specific exercise videos and all from a guy who not only has a honors degree in kinesiology, but also finished 11th in the 2012 Mr. Olympia competition? I mean heck, the guys is really one of the top elite bodybuilders in the world.

According to Ben Pakulski’s MI40 Pdf and exercise videos, his program is the best way out there to stimulate muscle growth, and he claims to follow the teachings himself. Knowing by the fact that he is one of the world’s elite bodybuilders – and literally trains in a laboratory where he is hooked up to all kinds of machinery – I guess it’s somewhat safe to assume that ‘B-pak’ knows a thing or two about building muscle.

Pakulski’s MI40 (Mass Intentions 40) is very popular, and also well marketed, but does it really deliver the cookies?

How Good is Ben Pakulski’s MI40? 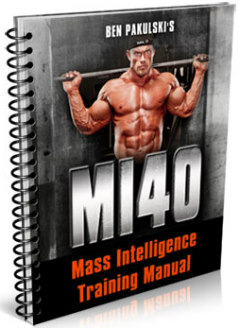 Let’s cut the crap and move straight on to the fact that obviously, Ben Pakulski – and anyone who competes at such high levels of pro bodybuilding – use HIGH doses of all kinds of anabolic steroids.

There’s not a shade of doubt about that. If you even for a split second think that the amount of muscle Pakman is holding would be attainable naturally, then you’re officially out of your fucking mind. It is not, and will never be attainable via natural means. If someone claims that in an effort to sell you a supplement, program, powder, shake, book, freaking yoga mat, or whatever, run.

Now obviously Pakulski himself can’t state the obvious fact that he uses a lot of PED’s, since this would cause all of his sponsors to instantly turn around and run away…

…However, Pakulski is smart enough to indirectly answer the question on anyones lips right at the beginning of the MI40 training manual, as he states:

No matter what you’re taking, you’d BETTER make sure your body is working optimally on the INSIDE if you want your training MAXIMIZED on the outside. You can take as many ‘extra-curricular supplements’ as you want, but if your body isn’t treated as a whole organism, maximizing recovery, controlling inflammation, and balancing hormones, it’s going to BREAK DOWN very, very quickly. Your gains will be limited and very short-term. Ninety percent of my clients are 100% drug-free so I know my methods are equally effective for drug-free or drug-assisted individuals. I approach ANY athlete by looking at the body as a whole. If there is ONE ingredient missing from the pie, you won’t be responding in the best way possibleBen Pakulski

The funny thing is that the only reason why I even started reading Pakulski’s stuff, is because I was watching this documentary from Netflix few months ago, one by the name of Generation Iron. And in the documentary was B-Pak, training in the lab of the University of Tampa, hooked to all kinds of testing devices and seeking for that “perfect muscle stimulation” for each movement.

Here’s a short clip about that;

Now as I said above, a guy that himself holds a honors degree in kinesiology, and trains with a professor in a lab of an University, MUST know a few tricks about building muscle. This eventually was the reason why I bought his MI40 program.

I was bit worried about just receiving a bunch of info that was filled with bro-science and supplement ads from Ben’s sponsor, but was actually surprised to see a very solid all-around bodybuilding program with good nutrition information, sensible training methods, and proper rest patterns too. Though there was a supplement manual in the bundle, it was not filled with ads and useless stuff. In fact the supplements recommended were the basic – known to work stuff – such as creatine, BCAAs, whey, casein, omega-3’s, vitamins, and minerals. And they weren’t even from the brand that sponsors PakMan (All Max Nutrition).

For an overall look of the program: The nutrition part was pretty good for the goal of building lean mass, with a medium-high protein intake from balanced sources and no omitting from fats or carbs. The timing of the macronutrients makes sense, and it’s something that I’ve done personally for a while even before seeing Ben’s recommendations; carbs mostly post-workout and in the evening, etc. There were also meal plans for various amounts of calories so even a dumb-dumb can get something out of the nutrition manual.

As for the training stuff, that’s where the program really shines. Ben focuses on four important principles; a) time under tension b) neurological overload c) proper range of motion d) increasing the muscular ‘torque’. The set-rep schemes are good – even for natural lifters – and every exercise is clearly demonstrated in videos and pictures, with included (printable) workout sheets and even a workout calendar.

The Pros:
The nutrition info is pretty solid for anyone looking to build lean muscle mass
Written by a real elite bodybuilder who also happens to have a kinesiology degree
Like all digital products sold through ClickBank, MI40 has a no-questions asked 60-day money back guarantee
The amount of highly specific and actionable information that you receive with the program is somewhat mind-blowing
Training videos are really clear and simple to follow and if you don’t have time to watch videos, they’re also demonstrated in pictures
There’s an audiofile where Ben shares his “secrets” that helped him build muscle (obviously doesn’t mention the PEDs though)
I’ve been into bodybuilding all my life, Its easy to say that anyone who follows the program with a slight calorie surplus, gets great results

The Cons:
The’7 day detox’ manual is useless, you don’t need any gimmicks to detoxify your body, you have a liver, gall bladder, and kidneys for that
Despite most of the program being based on scientifically sound principles, parts of the nutrition manual end up being pretty broscientific
“Twice the muscle in half the time” is misleading, I hope you don’t suck so much before the program that you get 2x results doing ‘MI40’
The 7-hours of video material, along with hundreds of pages of written content, is in my opinion too much for a workout program
Like in many digitally sold products, you will be pitched multiple add-ons after your purhcase, this can be bit intrusive

Q: How does MI40 compare to other similar programs?
A: I guess there are thousands of workout programs that we could compare the MI40 program to, since the fitness industry publishes new ‘revolutionary secrets’ and workout PDFs and so forth on pretty much a daily basis. Based on everything I’ve seen so far, B-pak’s program has a solid place in top-5…

…Despite the fact that Ben’s on a whole lot of steroids, his workout and nutrition info is pretty solid and something that will work with natural lifters too, also it’s quite rare to see a bodybuilder at this high level actually sharing his nutrition and workout info in such great detail.

Q: Are there people that you don’t recommend the program for?
A: Obviously this kind of a workout routine is nowhere near suitable for beginners. If you’re completely new to bodybuilding, I would advise at least few months of basic full-body training while learning good form and getting to know your body. There’s really no reason to get into this kind of “advanced” and somewhat specific tempo-timing-tension hi-fi stuff before having a solid foundation of strength to work with.
Q: Are there any bonuses in the program?
A: As I mentioned above, there are some options to buy add-ons after your purchase of the main program, which in itself includes the following products:

The MI40 program is pretty solid, and easily one of the better bodybuilding programs available on the internet. Still, there are few things that are not supported by sound science, such as the meal timing claims and few things about carbs & insulin…

Does it work? Yes. For intermediate to advanced lifters. For anyone who’s just a beginner, I would not try this kind of program yet. I have a solid training program myself that has yielded great results month after month, so I wasn’t looking to change anything when I got the book. However, after reading the manuals and watching most of the exercise videos, I actually ended up adding few exercises and incorporating a lot of the teachings into my own program.

Click Here to Read More about the MI40
Go to top