This is not the first time I’m writing about marijuana and testosterone.

In fact, about 6 months ago I wrote a post showcasing all the studies about its effects on androgen production, but since some serial-stoners decided to spam the shit out of the article, claiming that I was promoting propaganda, I just got tired of that and removed the whole thing.

After the deletion of the original posts, I’ve received a ton of inquiries about the subject, which is why I’m finally rewriting the old article about weed and testosterone. 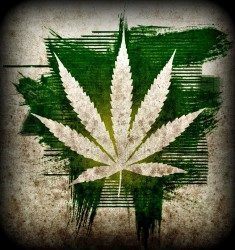 I don’t actively smoke weed myself, but I have nothing against pot, or against the people who use it.

Which is why I try to be as objective about the subject as I possibly can.

I’m sure most of you have already seen the alarming titles, such as: “Smoking pot causes man-boobs. Beware!” or the classics like “Marijuana using men are the worst lovers.”

I also know that a lot of bros at the gym like to claim that smoking pot would completely mess up your ability to gain muscle. When it comes to marijuana and testosterone, there is going to be a lot of crazy claims.

However, in my opinion, claims such as those above, are nothing more than fear of the unknown and unnecessary hysteria. There’s plenty of guys who have smoked weed for most of their lives, who don’t have man-boobs, and on top of that, some of the biggest guys in the bodybuilding scene are avid pot users.

Marijuana is just a goddamn herb. To claim that a single herb would be powerful enough to stop muscle growth, is beyond the scope of my understanding. It’s unlikely that you’d grow breasts by smoking it either.

Does this mean that marijuana is harmless for hormones? Well, not entirely I suppose:

The Research Behind Marijuana and Testosterone:
a) The claim that marijuana causes man-boobs, aka gynecomastia, has more than likely originated from these few in-vitro studies (study, study), where crude marijuana extract had estrogenic effects on isolated rodent cells. Now, if something acts like estrogen, it can definitely induce some man-breast growth… However, it’s important to note that the studies were done on isolated cells taken from rats, and the whole experiment was conducted inside test-tubes. On top of that the effects haven’t been seen in in-vivo studies (inside a living organism).

c) As weird as it is, some studies have shown that cannabis does not lower testosterone levels (study, study), despite the fact that a pile of studies has already shown that it does. Albeit, these review studies do contain research which shows cannabis to suppress testosterone, the abstracts still cleverly state that “chronic marijuana use showed no significant effect on hormone concentrations in either men or women.”.

Conclusion on Marijuana and Testosterone

So does marijuana lower testosterone levels or not? I believe it does, but with not such a magnitude that is often claimed.

Definitely not significantly enough to cause man-boobs or completely wipe off your gains in the gym, if that’s what you’re afraid of, don’t

And even if the testosterone lowering effects would be significant, it’s still reversible. One of the studies showed that 24 hours after smoking a joint, testosterone levels had returned back to pre-smoking levels.