DHEA (dehydroepitestosterone) is the most abundant steroid hormone in human circulation.

It’s made when the CYP11A1 enzyme converts cholesterol into pregnenolone, which is then converted into DHEA by another enzyme called CYP17. The synthesis of DHEA mainly occurs in the adrenal glands but also takes place in the gonads and brain.

Once DHEA is made and is “added” to the bodily pool, the body can then convert it into various “more potent” steroid hormones via enzymatic reactions (the two main hormones being testosterone and estrogen).

To make it stupidly simple, DHEA is a precursor hormone that the body converts to more potent sex hormones.

Since DHEA can be converted into testosterone, it would be only natural to assume that DHEA supplements (which are supplements containing synthetic dehydroepitestosterone, aka. the real deal steroid hormone) would also increase testosterone levels…

…But what says the evidence? And how legal/safe is DHEA supplementation anyway?

Should You Take DHEA Supplements? 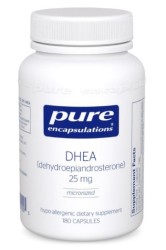 DHEA is often sold as “anti-age” supplement since the natural production of the hormone gradually slows down with rolling years.

NOTE: The age-related decline in natural DHEA synthesis has been theorized to be one of the leading causes of age-related testosterone decline.

Depending on your location, DHEA supplements may or may not be legally obtained. The regulations on the supplements are strict because taking DHEA supplements is basically the same thing as using exogenous steroid hormones – such as testosterone or DHT – even though DHEA has significantly weaker effects than the two and is considered to be virtually risk-free.

More or less you’re still introducing exogenous hormones into the body from an outer source, and partly because of this, many sports leagues have banned the use of DHEA (including WADA).

Enough with the jargon now, what is the evidence behind DHEA supps, do they even work as claimed?

First of, the anti-aging claim. Since DHEA peaks at around 20’s and then starts falling down (commonly being half of what it used to be at peak years when you reach 40, and being only 5% of the peak levels at 80), it’s claimed that adding supplemental DHEA to the regimen of older dudes, would have “youthful” benefits. The science on this is actually promising. In aging animals exogenous DHEA has been shown to significantly increase life-span. And a human study of more than 10,000 men aged over 50 years, it was seen that the lower the subjects DHEA levels, the higher the risk of age-related death was.

NOTE: There’s evidence that using DHEA supplements can increase serum estrogen levels (study, study, study), this occurrence, however, is unreliable and highly dependent on the levels of aromatase enzyme, meaning that it’s more prone to happen in women, and in men who are either obese and/or use a lot of alcohol (both increase aromatase levels).

ALSO NOTE: It’s also worth mentioning that the production of DHEA and the stress hormone cortisol are both triggered by the same hormone (ACTH) and that they are both made from the same “raw material” (cholesterol). Because of this, a person who is under stress and has high cortisol levels is also likely to have low DHEA and is likely to be more “reactive” to exogenous DHEA supplementation (which by the way can actually decrease cortisol levels).

DHEA supplementation can increase testosterone levels quite significantly in middle-aged and older men, and in menopausal women. However, these effects are – for some reason – highly unreliable in younger guys.

A person who is under chronic-stress (which likely means that he also has low DHEA levels) is likely to derive more benefits from exogenous DHEA supplementation than a person with a less stressful life.

It’s also good to keep in mind that using DHEA supplements means that you’re taking exogenous hormones from an outer source. Whether this causes or won’t cause a drop in the body’s natural production, is debated. Being a hormone many sports leagues have also banned DHEA supplements (it’s in the WADA list for example).

Depending on your location, you may be able to buy pure DHEA over-the-counter (affiliate link), in some countries though, it can be only attained via prescription. For example: here in Finland DHEA is a prescription drug, but in the United States, you can buy micronized DHEA from any normal supplement store.