Nutrition has a key role in our natural testosterone production. And one of the biggest factors in our diets is macronutrient ratios and the types of macronutrients we consume.

When it comes to dietary fat, it has arguably the largest impact and room for manipulation. Increasing or decreasing the total intake of dietary fat as well as focusing on the different fatty-acids and their ratios can move your rate of testosterone production up or down quite drastically.

This is also a topic that creates a lot of confusion. All kinds of experts are telling people to “just eat more fat” and “increase their intake of healthy fats”, but really, with the healthy fat they often refer to the unhealthiest kind from a hormonal perspective.

The Impact of Dietary Fat on Testosterone Production 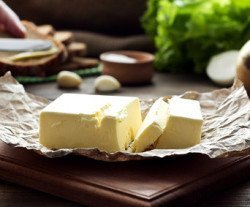 All steroid hormones have a structural backbone of a 17-carbon fat molecule called “gonane”, this makes them fat-soluble hormones.

Because of this, it’s only natural to assume that an increased amount of dietary fat, could lead to improved production of steroid hormones.

And according to research, it does, but there’s a caveat, which well be getting to more in detail below.

First, however, let’s take a look at the different fatty-acids we consume:

A good example of this is a human study by Volek et al.1, which found out that total fat intake, SFA, and MUFA raised serum test levels, but when the ratio of PUFA to SFA was increased, testosterone production took a nosedive.

A Finnish study by Hämäläinen et al.2 is also a prime example of the importance of total fat intake. The researchers made their subjects switch from a diet containing 40% calories fat (mainly from animal sources) into a diet that contained 20% calories from fat (mainly from PUFA), and then back again into the 40% fat. They found that testosterone levels plummeted when the subject switched to the low-fat diet, and returned back higher when the fat intake was lifted back to 40%. Another human study by Bélanger et al. did similar change and saw similar results, switching to lowered fat intake (and higher PUFA) resulted in significantly lower levels of androgens3.

This may explain why vegan men tend to have slightly lower testosterone levels in majority of the studies, as their diets are quite low in fat, and the dietary fat they get comes mostly from PUFAs, what also seems to occur in all of these studies is that lower SFA higher PUFA results in higher SHBG and less testosterone bioavailability.4–6

Not necessarily. There seems to be a point of diminishing returns, and this is simply because you also need to leave some room for carbohydrates and protein. For example, one study with hockey players dropped fat intake from 40% to 30% while simultaneously increasing carbohydrate intake from 45% to 55%, this resulted in elevated testosterone levels7, not something you’d expect by looking at the evidence above.

What makes PUFA so bad and how much total fat should I eat then?

The reason why polyunsaturated fatty-acids suppress testosterone and thyroid hormones are likely caused by the fact that they have long sensitive carbon-carbon chains in their structure. This makes the fatty-acids very unstable when in contact with oxygen, heat, and light, causing them to literally go rancid inside the body through a process called “lipid peroxidation”. This creating free radical and eventually oxidative damage in the cells8.

So if you’re trying to figure out the optimal intake of dietary fat for testosterone production. It likely falls between 25-40% of your daily calories. What should be the determinator is your intake of PUFA. If you can minimize polyunsaturated fat consumption, you may go as low as 25% fat and keep your testosterone production churning. However, if you do eat some PUFAs, it’s better to consume slightly more total calories from fat, more like 30-40%. In either case, I wouldn’t recommend going over that since you also need to leave room for carbohydrates (full article on carbs and testosterone) and protein (full article on protein and testosterone).

Conclusion on Fatty-Acids and Testosterone

There are some pretty clear conclusions to be drawn from the studies above, such as…