When you read articles about increasing testosterone levels naturally from the internet, a lot of them state that one should eat “healthy fats”.

Then they follow with a nice little list, somewhat like this; “Eat more nuts, more fish, and preferably supplement with fish oil to get more of the good fats”.

The thing is that those are actually NOT the good fats hormone-wise. For testosterone, one should aim to consume more saturated and monounsaturated fats, not the unsaturated kind.

Many of you already know the health and hormonal damage that can occur from too high intake of polyunsaturated fatty-acids (PUFA), due to the fact that these types of fats are prone to oxidation and lipid peroxidation, and easily create free radical damage in the body, which results in increased oxidative stress, lower testosterone, and lowered thyroid activity.

But even though some guys are smart enough to limit their PUFA consumption, they still swear by the benefits of fish oil. Omega-3’s are super healthy, right?

Fish Oil and its Problems as a Health Supplement 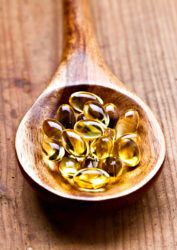 Like everyone, I used to consume a lot of fish oil before. I had heard – from many respected authorities – that fish oil, due to its omega-3 content, would be extremely healthy for us.

Just look around and you can see people touting how fish oil could; “make you lose weight”, “reduce inflammation”, “improve cardiovascular health”, and I could go on whole day listing the claims accounted to this “supreme healing substance”.

The positive press on fish oil for the last years has been so wide-spread, that fish oil supplements are now the third most commonly used health supplements in the US, coming behind the big-hitters; vitamins and minerals. Up to 10% of Americans now regularly consume fish oil capsules.

Well, does it work?

…This did not stop the sales though, because nobody actually reads studies, and fewer people actually talk about them in public. And who would dare question the legitimacy of fish oil and the people praising it? During the same time frame as the studies pretty much proved fish oil to be fairly useless, the sales of the oils doubled.

“I think that the era of fish oil as medication could be considered over now”.Dr. Gianni Tognoni

If we take a closer look, we can easily find many problems with fish oil, which should explain why it doesn’t work, and could actually be more harmful for us than many realize.

You rarely hear these facts about fish oil from the sellers;

Conclusion on Fish Oils and Testosterone

Certainly not. There’s no real benefit to consuming it, other than maybe the (sometimes) added vitamins, which you should get from elsewhere anyway.

The possibly damage caused by the sensitive – if not already rancid – PUFAs and the high amount of testosterone suppressing pollutants (mercury, POPs, PCBs, DDT, Dioxin…) are reason enough to stop wasting your money on these supplements.

If you’re a knucklehead and still refuse to believe the evidence presented here, at least consider taking a good dose of vitamin E and use medical grade fish oil (molecularly distilled) instead of cheaper brands to limit the negative effects of lipid peroxidation.