Ginseng and Testosterone: The Evidence

Ginseng is one of the most well-known herbs in the world and many men swear by its effectiveness. respectively, there seems to be a lot of truth behind those statements as years of research has provided us with quite an arsenal of evidence about the effectiveness of ginseng.

The Ginseng I’m referring to here is, of course, the original Korean Ginseng in its all natural form. Not Siberian ginseng or any patented formula of either one.

So that’s what today’s post is about. All natural Red Korean Ginseng (often referred to as Panax Ginseng) and its arsenal of clinical evidence.

Without further introductions, let’s take a look at the evidence. 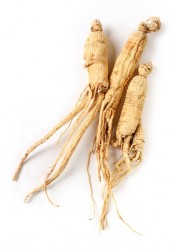 Nitric oxide is one of the cornerstones of men’s health.

It keeps your arteries and blood vessels wide and supple, and it allows your blood to flow more freely.

How do I know that Ginseng boosts nitric oxide levels then?

1. This double-blind placebo study from Korea found out that the group using Ginseng, noticed significant improvements in their erection quality, performance, and sexual satisfaction when compared to the placebo group. Positive effects were seen in as little as 8 weeks of usage.

2. Then there’s this popular study where 60 men with a history of erectile dysfunction took 1 g’s of Ginseng 3 times a day. In 12 weeks their erection quality and ability to penetrate increased significantly.

3. Then they even tested Ginseng with diabetic rats (who knows why?) and the researchers soon found out that even though those poor little fellows were severely diabetic, they still maintained their ability to have erections, thanks to Ginseng.

4. Here’s another human study where Ginseng users were much more satisfied with their erection quality than the people who didn’t receive Ginseng.

5. For a long time the researchers weren’t certain how Ginseng is able to produce such awesome effects, but then this study came along and found out that something called “ginsenosides” (obviously found in Ginseng root) are able to stimulate nitric oxide synthesis in rat cells. The same mechanism of action is most certainly seen in humans too.

I recommend this high-quality ginseng extract.

So is Ginseng awesome for nitric oxide and erections?

Answer: Most certainly is and there’s plenty of research in both humans and animals to back that statement up.

Ginseng As a Testosterone Booster 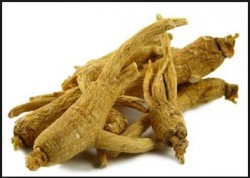 Ginseng is mainly used as an erection/nitric oxide booster. You can easily understand why, if you take a look at those studies provided above.

But there’s also some testosterone boosting abilities on this Korean root.

Why do I believe that?

a) It’s known that just by having an erection your testosterone levels will increase significantly, and as you can see above, the quality and frequency of erections do improve with Ginseng.

b) Nitric oxide will greatly increase your overall blood flow. By all the laws of common sense, it should also mean that your blood flow increases in the hypothalamus-pituitary-testis axis, which should mean that there’s enhanced ability to produce more testosterone inside the testicles.

c) Ginseng is known to significantly decrease blood glucose levels in humans. High blood glucose is one of the biggest causes of low testosterone and obviously correcting that will help to increase your testosterone levels naturally.

d) This study found out that the steroidal saponins present in Ginseng were able to increase testosterone, DHT, luteinizing hormone, and various androgens in healthy men, and even among severely hypogonadal men. Sperm parameters improved too in both groups.

e) In this animal study, the researchers found out that Ginseng increased testosterone levels in animals too.

f) However, this study found no increase in testosterone after consumption of Ginseng (which to me makes no sense based on all the studies presented above).

So does Ginseng boost testosterone levels then?

Answer: In my honest opinion, I do believe so. More research on humans would help to conclude that, but with all the laws of common sense and science, I can conclude that Ginseng most likely does increase testosterone levels naturally.

Important Note on The Quality of Your Ginseng

Due to the fact that Panax Ginseng is extremely popular (no wonder why), there’s also one caution that we should take before buying it.

As this review found out that 25% of the Ginseng on the market isn’t as strong as promised on the bottle. Also, they found out that 45% of the products lack ginsenosides or are in some way contaminated.

Again as we can see, with a big market, comes lousy products.

One of the trusted brands that did pass that test was Solgar’s Ginseng root.

Ginseng is a potential testosterone booster with some extremely beneficial erection and nitric oxide boosting benefits.

The best thing about Ginseng is the fact that it’s so widely researched, and there’s also plenty of human studies too. So Ginseng is pretty awesome when it comes down to cold hard evidence.

In my opinion, Ginseng is a herb that all guys should experiment with, to see how they react to the benefits examined above.