Green tea is considered to be one of the healthiest drinks around due to its fairly high content of antioxidants. In the case of green tea or supplemental green tea extract, there are four antioxidants that are believed to be the principal cause to green tea health benefits. These are called “green tea catechins” (GTC) and include:

Other compounds in green tea that can also contribute to some of its health benefits include the flavonoids quercetin, myricetin, and kaempferol, and of course, everyone’s favorite alkaloid; caffeine.

Due to the high amount of relatively powerful antioxidants (the catechins for example are about 2x more potent antioxidants than vitamin C), green tea has been linked to various health benefits, including: reduced risk of type 2 diabetes, improved cardiovascular health, and it can even make you lose some weight (not a huge effect) due to its ability to boost metabolic rate.

Good stuff, right? Well not so fast. There’s some evidence that even though it’s generally quite healthy, too much green tea might actually and up reducing your testosterone levels:

The Effect of Green Tea on Testosterone 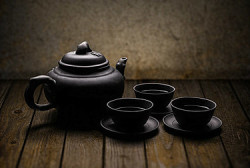 Given that many kinds of antioxidants are beneficial for testosterone levels, it would be easy to think that green tea should be pro-testosterone. However, studies examining this have yielded opposite results.

For instance, there’s this in-vitro study, where the researchers incubated isolated rat Leydig cells (the cells that produce testosterone in the gonads) with green tea catechins (GTC) for 3 hours, while simultaneously checking the testosterone content and various enzyme reactions in the cells when under the influence of the green tea antioxidants. Surprisingly, both of the used catechins (EGCG and EC) produced an inhibitory effect on basal and stimulated testosterone production.

In another study, male rodents were injected with the principal catechin of green tea (EGCG), and 8 days into the study their testicle size had reduced by 10-20%, while testosterone levels dropped by a whopping 70%.

Perhaps the most interesting study on the effects of green tea on testosterone production comes from a group of Indian researchers, who gave their male rodent subjects varying doses of green tea extracts orally:

The rodents received their respected doses of green tea extracts for 26 days, after which the rodents were sacrificed, and the researchers examined the enzymatic and hormonal differences from the blood samples taken before and after the 26 day study period.

The results were similar to the previous studies above. Dose-dependently green tea extract suppressed the testicular enzymes needed in steroidogenesis, decreased the size of testicles, and resulted in significant reductions of serum testosterone, being: -25% in the mild group, -60% in the moderate group, and -78% in the high group.

Sadly, I wasn’t able to find any studies on green tea and testosterone conducted on human males. However, since male rodents share a similar endocrine system with human males, it’s likely that the results above have some merit in humans too.

It’s also worth noting that the antioxidant content of the green teas and supplemental extracts varies greatly, and that green tea is considered to be one of the foods highest in fluoride, which in itself is an (at high levels) neurotoxic halogen that has been linked to lower testosterone levels and disrupted thyroid hormone production.

The rodent studies, lack of human research, and disturbingly high fluoride content of green tea are 3 reasons why I personally don’t enjoy drinking green tea (although if you madly love the taste, a cup once in a while isn’t going to turn you into a eunuch just yet).