Phosphatidylserine (PS) is a naturally occurring phospholipid that exists in the cell membranes of all species. In simple words, it’s a type of fat that can be found in every cell membrane of the human body that also contains the mineral phosphorus.

Roughly 60 grams of phosphatidylserine can be found in the human brain, testes, lungs, muscle tissue, kidneys, liver, and blood plasma. About 50% of the PS in the body exists in neural tissue.

Because nearly 50% of the phosphatidylserine exists in neural tissue, it’s also believed that the phospholipid has a brain function improving effect. In other words, it’s believed to be a nootropic (smart drug).

So, phosphatidylserine clearly has some benefits as a brain booster and I guess we can easily call it a well-researched nootropic.

However cognitive stuff is not all that this lipid has been researched for: 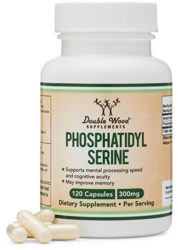 There are two very interesting facts about phosphatidylserine that could make it a potential testosterone booster.

…Firstly, it’s a message sender between the cells, which means that it could also improve the signals that come from hormones.

…Secondly, it protects cells (think Leydig) from oxidative damage (brains and testicles contain the most of phosphatidylserine in the body).

So in a paper, there could be some testosterone boosting effects in phosphatidylserine supplementation due to its ability to act as a secondary message sender and a potential cortisol/oxidative damage blocker.

Fortunately, we don’t even have to speculate, as few studies have examined the above already:

a) Few studies have found that phosphatidylserine supplementation lowers cortisol secretion in stressed subjects (study, study), and this study found out that 800 mg’s of daily PS reduced the exercise-induced rise in cortisol by 30%.

b) This peer-reviewed study from Starks et al. found out that 600 mg’s of daily PS in combination with resistance training produced a staggering 180% improvement in testosterone to cortisol ratio of healthy human subjects when compared to placebo.

At this point, phosphatidylserine becomes a very interesting supplement.

Not only is great for the brain, but it seems to also be great for guys who exercise – after all – scientist often use the testosterone to cortisol ratio as a measure to see how effectively the body can build lean muscle mass.

Are there any food sources for phosphatidylserine?

Answer: Bovine brain, chicken heart, pig spleen, pig liver, and certain lecithin (sunflower and soy mainly) are all good sources of PS. However to reach the dosages used in the studies above supplementation is easier, but not required (see a chart of foods highest in PS here).

What are the phosphatidylserine supplements made of?

Answer: Originally PS supplements were all derived from bovine brains, but when the mad cow’s disease panic started in the US, manufacturers backed off and started deriving their supplements from plants. That’s why most of the phosphatidylserine on the market is now derived from soy lecithin.

phosphatidylserine (PS) is an interesting lipid, which clearly has some testosterone boosting and cortisol suppressing effects in combination with resistance training.

Not to mention that it’s also a powerful nootropic (brain booster).

With that being said, I don’t supplement with PS myself, as it’s quite expensive and because I already consume plenty of animal organs in my diet to begin with.

And that’s what you should do too, eat plenty of animal organs, they’re jam-packed with a wide variety of essential nutrients for men’s health, such as the phosphatidylserine.