Protein is easily the least demonized of the macronutrients, and when it comes to male health, people actually love it a bit too much.

Especially the guys involved in any form of weightlifting, some of them consuming ridiculously high amounts of dietary protein, sometimes upwards of 50% total daily calories.

This is nothing short of disastrous for testosterone production, besides, it’s not required for optimal muscle protein synthesis either. Why? I will show a few examples below.

Many men are unknowingly ingesting way too high amounts of protein which negatively impacts their hormonal environment and hinders muscular gains and overall men’s health. 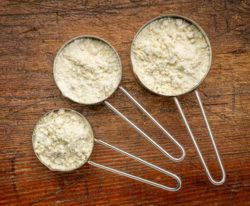 Proteins are varying lengths of amino acid chains bound together with peptide bonds.

If a protein source has all the essential amino acids, it’s considered to be “complete protein”; milk, meat, and eggs being prime examples.

And when it comes to the production of testosterone and building muscle mass, the gross macronutrient intake of dietary protein in total makes a huge difference, and the type of protein consumed can also have an effect, albeit it’s not as significant as in what’s seen with total protein intake (usually measured in grams or percent of total calories).

Research over the years has shown some interesting findings about protein intake in relation to muscle gains and testosterone production.

For instance, it’s well known that chronic protein malnutrition leads to significantly lowered testosterone production and loss of muscle mass1, but we also know that protein intake at 0,8g/lb of lean mass is all you need for maximal muscle protein synthesis2,3. Even as low as 0.37g/lb is enough to maintain positive nitrogen balance in seasoned bodybuilders4.

In terms of the hormonal effects of protein, perhaps the most interesting study comes from Volek et al5. In the study, the researchers made their resistance trained subjects consume different diets with different macronutrient compositions and examined their hormonal changes during those (low-fat, high carb, high protein, etc).

What they found was that the higher the subjects went in total protein intake, the lower their serum testosterone levels fell. Same was true for the protein/carbohydrate ratio; more protein and fewer carbs resulted in a suppressed testosterone synthesis.

Anderson et al6. conducted a similar study where the researchers compared the hormonal effects of high protein and high carb diets on non-trained men, total caloric intake and fat intake was kept identical on both of the diets, so the only thing that changed was the ratio of protein to carbohydrate.

Findings? Similar to as what was seen in the study by Volek et al. testosterone (and DHT) levels were significantly suppressed on a high-protein diet when compared to high-carb diet. In addition, they also saw that higher protein intake resulted in lower SHBG and higher cortisol levels. Their data indicates that the only “negative” effect of a low-protein diet, would be a slightly higher production of SHBG, and would you guess, research by Longcope et al7. did note that at least also in older men, lower protein intake raised SHBG production.

What can also influence testosterone levels is the type of protein consumed. There isn’t much research about the subject, but at least one study has shown that animal protein is superior to soy-protein when it comes to androgen production8. What causes this? Could be many things, such as the phytoestrogens in soy, its goitrogenic (thyroid disruptive) effect, or the different amino acid composition.

Conclusion on Dietary Protein and Testosterone

I guess it’s obvious by now that I’m not a big fan of high-protein diets.

Like many guys, I used to believe that protein was the end-all-be-all macronutrient and getting more of it would equate to more gains and better health, but this couldn’t be further from the truth.

You certainly need some protein, but nowhere near the humongous amounts that the bodybuilding and fitness industry tends to recommend (not so surprisingly they are also the ones selling you the protein tubs).

The conclusion I would draw from the above research is that high-protein diets are detrimental for testosterone production, for DHT production, and they lead to elevated levels of the catabolic stress hormone; cortisol. On the other hand, lower-protein diets can slightly increase SHBG levels, which makes testosterone less bio-availailable in the body.

In any case, I would argue that the huge drop in testosterone and DHT, accompanied with the increased stress hormone cortisol, are much more of a concern than increased SHBG, besides, consuming some fructose and supplementing with magnesium and boron are some easy ways to push that SHBG back down.

So what would be the optimal protein intake? Personally, I’d stick to around 20% of daily calories, maybe even 25-30% if you’re on a caloric deficit. I do however see no reason to ever go beyond 30%, as this would make you drop carbohydrate and fat intake too low and result in significantly suppressed testosterone production