The Ganoderma Lucidum – commonly known as Reishi or Lingzhi – is a fungus that grows out of Eastern Hemlock trees that cultivate primarily in Northern America.

It has been used as a supreme medicinal mushroom in Chinese medicine for over 2,000 years, and even Western medicine has taken interest in its possible health benefits. Some ancient writings refer to reishi as “the mushroom of life; elixir of life”, and it’s known that the Emperor Wu of Han, who ruled China over 2,000 years ago, sent out several expeditions to look for Reishi (which he referred to as “the plant of immortality”).

Since Wu of Han has been dead for thousands of years, we can safely say that Reishi doesn’t make you immortal. However, modern research has shown that Ganoderma lucidum has some very potent healing effects in the body, especially in terms immune system boosting effects.

When it comes to hormones though, Reishi is known to act as a very potent antiandrogen. Although this hasn’t stopped the marketers for calling it a “natural hormone balancer”. 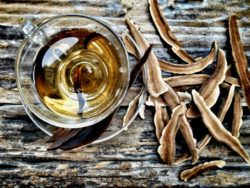 Due to the bitter taste, Reishi mushrooms are often sliced and brewed into tea.

This kidney-shaped fungus holds in multiple active compounds, such as triterpenes, alkaloids, polysaccharides, coumarin, mannitol, plant sterols, and ganoderic acids (which are said to be structurally similar with the steroids produced naturally by the body)1.

For years, Asian physicians and naturopaths have prescribed it to support immune activity. More commonly, people in the West have used ganoderma lucidum extracts and tea as an alternative medicine.

As to be expected, the modern drug industry has quickly ruled out the use of Reishi.

As always, consult with your doctor before dabbling into any alternative pathways.

Research has shown that in humans, Reishi upregulates the production of various lymphocytes, T-helper cells, and T-killer cells; TNF-α3–5. These are thought to be the primary mechanism behind immune boosting benefits, although several other mechanisms have also been noted in cell-culture studies6–9.

In a nutshell, Reishi appears to be helpful for boosting immunity.

When it comes to the hormonal effects of G. lucidum, they aren’t as positive. When Reishi was studied alongside 19 other medicinal mushrooms for their 5 alpha-reductase inhibitor activity, it was noted that out of all the fungi, it was G. lucidum that most potently suppressed 5-a reductase (and thus prevents testosterone from converting into dihydrotestosterone; the master androgen). This antiandrogenic effect is dose-dependent, and alcohol extracted Reishi seems to be more potent at blocking DHT production than water-extracts10–13.

You’d think that if 5-a reductase is blocked, less testosterone is converted to DHT and the result would be higher serum T-levels, but this isn’t the case here. Reishi supplementation has been found to not alter testosterone levels in human subjects14, even though it did so in rodents15. Even worse, the antiandrogenic effect of Ganoderma lucidum extends to androgen receptors, where Reishi dose-dependently blocks the binding of testosterone and DHT12. Similarly to oats and Avena sativa supplements, Reishi is also a rich source of the polysaccharide β-Glucan1, which is antiandrogenic16.

Although reishi doesn’t seem to alter serum testosterone levels in humans, it still has multiple antiandrogenic mechanisms that suppress DHT and T utilization in the body. It’s considered to be the most potent natural antiandrogen so far discovered.

Reishi is a potent medicinal mushroom with multiple active ingredients.

It powerfully stimulates immunity, but at the same time, it’s the strongest known natural antiandrogen and can interfere with the production of DHT and binding of male hormones to their receptor sites.

Since most of you reading this are looking for ways to raise testosterone and DHT levels to enhance anabolic and androgenic effects in the body, Reishi would definitely be something to avoid, as it likely is the most counterproductive supplement you could possibly take in regards of hormonal optimization.