Royal Jelly and Testosterone: Can it Help Restore Fertility?

Royal jelly is an anabolic porridge-like goo secreted from the hypopharynx glands of the worker bees.

When the hive decides to change the queen bee, they select few small larvae and start feeding them with royal jelly. This anabolic nutritional powerhouse will then grow the larvae to be 60 times bigger and live for 40 times longer than other bees in the hive, thus becoming the next queen bee.

Aside from the fact that the jelly is jam-packed with nutrients and enzymes, there’s also one other interesting benefit in royal jelly. 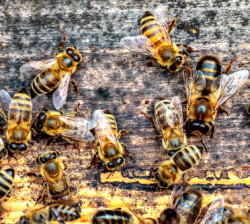 Royal jelly is packed full of vitamins, minerals, and enzymes. One could easily call it a natural multivitamin.

It’s also a relatively dense source of acetylcholine, a neurotransmitter that improves the messaging between cells and hormones (acetylcholine also acts as a methylator, helping the liver to chelate estrogen).

Not to mention the fact that This anabolic jello contains small amounts of testosterone. Not a mimetic, but the actual hormone.

Here’s what the modern day research says about this hormonal goo:

a) This human study from 2007 concluded in the Thi-Qar College of Medicine in Iraq, found out that 25 mg’s (a minuscule amount) of Royal jelly mixed in honey was enough to increase testosterone levels by 20% on infertile men (the study lasted for 3 months).

b) This study from the Gifu University Graduate School of Medicine found out that when healthy human subjects are given 3,000 mg’s of Royal jelly for the period of 6 months, they increase their testosterone levels by 14% when compared to placebo. They also found out that the jelly increased red blood cell count which according to the researchers is caused by the elevated testosterone levels.

The preliminary reason on why Royal jelly increases testosterone levels is not fully understood, as one study found out that it stimulates the pituiary gland, another one found out that it converts DHEA more easily into testosterone by stimulating 3β-HSD2 and/or 17β-HSD3 enzyme production (similarly as what happens with coconut oil), and both of the human studies found out that royal jelly increased luteinizing hormone (LH) which is a sign that it stimulates the hypothalamus-pituitary-testicles axis.

And the researchers haven’t really found out what is the principal ingredient in Royal jelly that triggers these hormonal changes, but the study which carried on for 6 months did give a liquid placebo solution for their control group, which contained the same amount of nutrients, vitamins, and minerals as royal jelly does…

It’s probably a synergic effect of vitamins, minerals, enzymes, lipids, acetylcholine, the actual androgen, and a bunch of something that we don’t know of, which triggers the changes, or something completely different. Go and figure, but at least it seems to work very well for restoring youthful testosterone and fertility levels.

Here’s the brand of Royal jelly that I’m currently using (affiliate link), it’s a huge supply of pure RJ and definitely not the cheapest one out there.

Royal jelly is an anabolic porridge produced by worker bees, and it seems to increase testosterone levels in infertile men, healthy men, rats, bucks, and hamsters.