Saw Palmetto and Testosterone: Not Recommended

Saw palmetto is an extract made out of the fruit of a plant called serenoa repens.

It was a big-time hit on the bodybuilding world some years ago, and sometimes it’s even claimed as the best testosterone booster of them all.

But really, it only increases testosterone at the expense of a more powerful hormone: 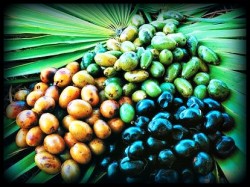 There’s this enzyme called 5-αlpha reductase in your body, which converts testosterone into its more potent form of dihydrotestosterone (DHT).

DHT is 3-10 times as strong as testosterone is, and most medical experts believe that it’s the principal androgen behind the development of genitals, male sexual function, body hair, beard growth, and muscle growth.

Actually, many of the benefits of testosterone come from the fact that high testosterone most often also means high DHT, as there wouldn’t be any DHT without T.

So you most certainly don’t want to decrease the amounts of this crucial androgen.

And that’s where the problems with saw palmetto start…

It increases testosterone, but it does so by inhibiting the 5-α reductase enzyme, which means that the herb inhibits the conversion from testosterone to DHT. The result is that you will have more testosterone, as it can’t convert into DHT, but you will feel like shit as you’re only blocking the testosterone from converting into its more potent form.

As a man, you really don’t want to mess around with saw palmetto, or any other DHT inhibitor (post-finasteride forums and groups exists because some men completely destroyed their hormonal health with the 5-a blocking hair loss drug).

Here’s what science says about this nasty extract:

a) One study saw that saw palmetto blocks DHT production via inhibiting the 5-a enzyme, and also by working as an alpha-1 adrenergic antagonist.

c) This study found out that saw palmetto can have a side effect of sexual dysfunction, which really isn’t a surprise when it blocks the main androgen behind sexual function.

d) This study found out that saw palmetto might help men who have enlargened prostates, as it can relieve benign prostate hyperplasia (BPH). However, the benefits are miniscule on the side of the big negatives.

e) One study saw a 32% decrease in DHT after saw palmetto supplementation. They also found out that a hair loss drug called Finasteride had similar effects (more about the dangers of Finasteride here).

f) This study found out that men who used 320 mg’s of daily saw palmetto extract for 3 months, had significantly higher testosterone levels, but also significantly lower DHT levels than the control group. They also found out that saw palmetto didn’t relieve the symptoms of benign prostate hyperplasia (BPH), which is nothing new as DHT is really not the cause for prostate problems, neither is testosterone.

Even though many guys swear by the name of saw palmetto as a testosterone booster, it works but it doesn’t work through the “correct” pathways.

It simply increases testosterone as it blocks the conversion from testosterone into DHT, which leaves more T to your serum.

And that’s not a good thing for sure.

So that’s why I will never use, or recommend saw palmetto.