Stinging nettle root (Urtica dioica) is a common plant most should already be familiar with.

It’s added into many testosterone booster supplements, and generally, stinging nettle is labeled by some as a testosterone raising herbal supplement that works by inhibiting SHBG (Sex Hormone Binding Globulin), and thus makes testosterone more bio-available in the body. Confusingly, nettle roots are also claimed to both; increase and decrease DHT levels.

What does the actual research say about these claims? Let’s figure out. 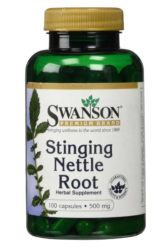 There are several active compounds in nettles, such as; lectins, histamine, sterols, glycosides, and polysaccharide lignans.

The stinging nettle plant has been extensively studied in isolated cell cultures (in-vitro) and in animals.

Limited studies also exist in humans, but not enough to make any definitive conclusions. Most of the trials revolve around the topic of prostatic health.

It’s good to note that most of the research is done with the root parts of the plant, since many supplement companies try to be sneaky and use the much cheaper leaves in their formulations.

It has been noted in test-tubes that the polysaccharide lignans extracted from nettle roots have the ability to bind SHBG molecules, rendering them inactive by taking the place that would normally be populated by hormones1.

One study found this inhibitory potency to be dose-dependent, starting from 0,6mg/ml and being fully inhibited at 10mg/ml2. So there is a legitimate reason to claim that nettle roots could inhibit SHBG, but it’s good to remember that this was tested in cell-cultures on a petri dish, not inside actual living subjects.

Some in-vitro studies have shown that nettle roots can also inhibit the enzyme 5-alpha reductase, which metabolizes testosterone into more potent derivate; DHT3. However, it has also been shown that this inhibition only happens with high-doses of methanol extracted root and doesn’t occur at all with lower amounts of ethanol extracted roots4.

Since nettle root may block 5-a reductase at higher dosages, it may also lower the conversion rate of testosterone to DHT. On the other hand, since nettle root extract also lowers the binding affinity of SHBG towards androgens, it also makes the DHT already in circulation more bio-available. In-vitro research by Gansser et al5. noted that isolated lignans were able to displace DHT from SHBG by up to a staggering 60-94%.

Research on prostate enlargement has shown that stinging nettle root extract greatly reduces the rate of complications associated with prostate issues, such as reduced urinary flow and the number of times older men have to wake up to take a leak at night. In both animals and humans, slight reductions in prostate gland size have been noted6–8.

Although many are quick to rule the prostate benefits of nettle root extract to reduced DHT, few studies have speculated that it may actually be the reduced SHBG that is responsible of these effects4,9.

Since the in-vitro and animal studies suggest stinging nettle roots to lower SHBG and possibly also 5-a reductase, the result should logically be significantly increased free-testosterone levels…

…However, in a human study where 558 subjects got 120mg of nettle root extract 3-times per day, the researchers saw no change in testosterone6. In fact, the only research in living organism to ever show increases in testosterone levels, was conducted on rats that were already being supplemented with testosterone injections10.

From the above studies, it’s obvious that all the claims of nettle root benefits, simply don’t pan out in human trials.

If you decide to supplement with stinging nettle root (which may or may not work), make sure it’s high-quality root extract with the actual lignans (affiliate link).