Sugar – after saturated fat – is likely the most demonized foodstuff there is. Ask almost anyone and they will gladly tell you with high level of confidence that sugar is bad for us, that it’s unhealthy, and that they are “trying to limit their intake”.

And that’s where the popular knowledge ends. Sure, some may claim that “oh, sugar is a fast carb, it has high glycemic index” or the classic “well, sugar makes you fat and that’s unhealthy”…

Rarely do people fully understand what is sugar, how it acts in the body, and how much it really contributes to obesity, inflammation, hormones, etc. And now that we’ve moved over from blaming saturated fat for all of our health problems, we need a new thing to demonize and blame for our obesity and health problems. Sugar is the perfect target, and it certainly gets its share of bad rep already.

But did you know that even though we try to blame sugar for everything, and say that we are getting fatter and fatter due to increased sugar usage, science actually shows that sugar consumption has dropped during this time that the obesity rates have dramatically risen.

One study calls this “the Australian Paradox“, as during the timeframe of 1980-2003, obesity rates tripled in the country, yet the intake of refined sugar dropped by 23%.

Furthermore, it’s obvious among the fitness and hormonal health field for authors and bloggers to recommend limiting sugar intake under the premise that sugar would lower testosterone levels in men – as there is research showing something like that – however, even in this case, taking a closer look at the actual studies reveals that the truth is more complex than the titles and abstracts make it look.

Heck, I certainly have given my fair share of negative press on sugar for these past years, but over the years – as my knowledge and understanding of scientific literature has vastly improved – I’ve come to realize that my initial thoughts about sugar being unhealthy, were for the most part inaccurate assumptions based largely on the popular opinion and validation of my own beliefs of the time.

I’m thankful for the fact that I can admit my failures and open myself up to new evidence to form an opinion, but with that being said, I don’t have much at stake for this sugar thing…

…Think about the people who have written best-selling books about low-carb diets, paleo, and the evils of sugar, will they be able to admit to their readers that what they believe was right, might of actually been inaccurate manifestation of their own beliefs at the time?

Most people wont and this is likely one of the reasons it took so long for the saturated fat and dietary cholesterol myths to subside.

Let’s not get side-tracked however, back to sugar, health, and hormones: 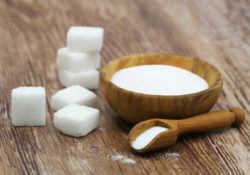 Sugars are naturally occurring carbohydrates that provide energy for the body in the form of glucose and fructose. Your brain for example, requires roughly 130 grams of glucose on a daily basis to cover the most basic energy needs.

The major internal organs, glands, and muscles all use glucose as their main energy source. If you deprive the body from this, it will try to make up for it by a process called gluconeogenesis, in which the body breaks down protein and fatty-acid to create glucose, do this long enough and your body goes into ketosis – which surely has some health benefits – but is also just another form of metabolic stress during glucose deprivation.

Almost all carbohydrates, starches and sugars, break down to glucose – the simplest form of sugar – after ingestion. The rate at which this happens is measured by the “glycemic index” or “glycemic load”.

Although the low-carbers tried for years to confuse average people into believing that low glycemic index foods would be “it” for weight loss. Research showed time after time again that it was the total energy intake of daily calories, not the GI that is behind our ability to gain or lose weight.

The most common kinds of sugars in our diet include;

The studies looking into the effects of sugar on various health parameters, often use pure fructose, pure glucose, or sucrose. In our normal daily lives, majority of the sugars we consume come in balance of ~50% glucose, ~50% fructose. The main difference between glucose and fructose, is the fact that the latter is metabolized in the liver and is more rapidly absorbed.

Some Real Health Benefits of Sugar 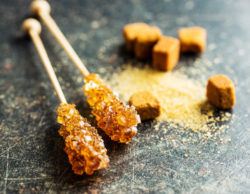 Due to the demonization of sugar, it may seem bit outer-worldish to claim that sugar consumption would actually have some health benefits.

Yet it does. And it makes sense.

Why would this source of energy that the body naturally prioritises be harmful for us? Why would the most easily attainable naturally occuring foods like berries and fruit (which are loaded with simple sugars) be the cause of our ever increasing weight and health problems? And lastly, why have these problems skyrocketed, all while our consumption of sugar has decreased?

I certainly don’t have the answers to all these questions, but if we start to look at the scientific evidence without any pre-existing beliefs about sugar, it becomes obvious that this stuff isn’t as bad as one would think.

There’s plenty of research showing how glucose and fructose actually negatively correlate with diabetes, and that fructose – due to the fact that it’s metabolized in the liver – doesn’t need insulin to be pushed into the cells, which is probably why higher intakes of fructose have been found to improve – yes, improve – insulin sensitivity.

Bears coming out of hibernation reverse their full-blown diabetic state by eating honey, which is a rich source of fructoseTim Berzins

Oh then what about the ever-claimed fact that sugar makes us fat?

Has anyone considered the fact that sugars are the primary fuel for the thyroid gland, and that the thyroid gland actually controls the rate at which your body burns calories, aka. metabolic rate? When you eat more simple sugars, your thyroid gland produces more T4 thyroid hormones, and with adequate sugars stored in the liver, your body can easily convert T4 into the active T3 form, which greatly improves energy production and metabolic rate.

If sugars and carbohydrates would make us all fat, why in the World are almost all bodybuilders for the last hundred of years eaten high-carb diets while getting chiseled to the bone? Heck, when you lower your calories in order to lose weight, one of the most powerful compounds that can preserve metabolic rate, is in fact; fructose. It supposedly is the substance most notorious for making us gain weight, but in reality it’s pretty low in caloric content, has the ability to greatly support metabolic rate, and has a muscle sparing effect.

The liver provides about 70% of our active thyroid hormone, by converting thyroxine to T3, but it can provide this active hormone only when it has adequate glucose.Dr. Ray Peat

So what about fatty liver disease? That’s one of the key “evils” that fructose is blamed for.

In reality, fructose has been shown to be protective against hepatic liver problems, and when there’s adequate choline in the diet, over-feeding of fructose does not lead to fat accumulation in the liver at all. The problem of fatty-liver disease has nothing to do with fructose, and everything to do with eating too much polyunsaturated fatty-acids (which prevent exportation of liver fat) and lack of choline (which is a necessary micronutrient required in the exportation of fat from the liver).

Lastly, you may have heard a stupendous amount of authors and mommy-bloggers going around in circles saying that sugar would be toxic and that it would increase oxidative damage and inflammation in the body. Strangely however, research shows that simple sugars have antioxidative effects, improving the antioxidant capacity of cells, thus reducing inflammation and oxidative stress…

…And about that claim that sugar would be toxic. Seriously, how many times have you heard of someone actually getting poisoned by sugar? How often are kids rushed to ER with sugar-poisoning after, let’s say, Halloween?

Sugar is the primary source of energy that our cells crave for. It’s wide-spread in the most natural foodstuffs, and simple sugars are the main fuel for the master gland that controls our metabolic rate and energy production; the thyroid. Glucose and fructose have antioxidant-like effects, and in reality they don’t contribute to fatty-liver disease unless there’s a deficiency of choline which prevents the exportation of fat from the liver. So really, what are we afraid of here? 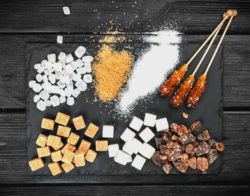 After all this rambling, we finally get to the actual topic.

What has sugar intake have to do with testosterone levels.

Not much according to the men’s health blogosphere, as everyone seems to say that in order to increase testosterone levels, one needs to ditch sugar and focus on the slower – more complex – carbs.

This notion commonly comes from this study, where the researchers gave 66 men with varying glucose tolerances 75 grams of sugar in the form of glucose. Pretty quickly, their testosterone levels dipped by average of 25%.

Quickly looking at the title and abstract, makes it seem like sugar is one hell of a powerful testosterone suppressant, BUT, closer look shows that it likely isn’t.

Secondly, the study in itself showed no change to luteinizing hormone (LH) levels, which suggest that the acute intake of 75 grams glucose, did not suppress the gonadotropin responsible of the production of testosterone. In a more likely scenario, it could be that the administration of sugar increased insulin levels, and insulin effectively pushed some testosterone into the androgen receptors in cells, thus showing lower levels in the bloodstream.

Lastly, the study was conducted during the timeframe of 8AM-12PM. As you probably know, testosterone levels are at their peak in the morning, and then drop as the day goes on, being their lowest in the evening and peaking up again in the next morning. Just as Adel from Suppversity greatly explains in his article about this study, it could very well be that the drop in testosterone observed in the study, would actually be just a natural daily fluctuation in testosterone levels. The fact that there’s no compensatory change in LH levels even after testosterone levels dipped, suggests that this could certainly be the case.

Since your fructose helps your liver convert more T4 in T3, the active thyroid hormone, this means more of the youth-associated steroid hormones like pregnenolone, progesterone, DHEA, and testosterone will be created if there is adequate cholesterol and vitamin A combined with a high fructose diet.Tim Berzins

This was supposed to be a quick little article, but ended up far longer than I expected. Anyhow, in the humble opinion of the Anabolic Men brand…

Is it unhealthy? Evidence would suggest otherwise. Does it lower testosterone levels? Evidence and common sense would again – despite that oral glucose loading study – suggest otherwise. The fact that sperm and testicles are jam-packed with fructose, is also a giveaway. If sugar would be bad for the reproductive health, why would our testicles be full of that stuff then?

Would I recommend eating huge amounts of table sugar? Not really. Simply because it doesn’t contain any key micronutrients. It’s far better to get your glucose and fructose from honey, potatoes, fruits and pressed fruit-juices, berries, etc. With that being said, I personally do dump quite a lot of table sugar into my morning coffee nowadays (and I’m still alive).