Yohimbe and Testosterone: The Old-School Booster

Yohimbine is an alkaloid found in the Yohimbe tree bark.

It’s used generally as a fat loss aid, testosterone booster, and even as a pro-erectile agent, but does it work as well as claimed?

How Effective is Yohimbine 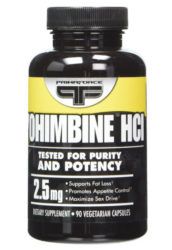 Yohimbe (Pausinystalia Yohimbe) is an evergreen tree native to Africa.

Its barks are used to extract alkaloids like yohimbine for the use of the supplement industry. Sometimes the whole ground Yohimbe bark powder is also used (although their effects are rather similar, due to yohimbine being the active ingredient).

Yohimbe is highly stimulatory and is thus often claimed to enhance the effectiveness of compounds like caffeine.

This is what research says about Yohimbe and yohimbine:

Yohimbine interferes with the noradrenaline system feedback loop (causing increased production and accumulation of the catecholamines1), this causes Yohimbe to increase noradrenaline levels dose-dependently, which can be favorable for fat-mobilization2–4.

Another mechanism of Yohimbe and yohimbine is to modulate the adrenergic receptors of fat cells5. Yohimbine is a potent natural antagonist of the A2-receptors, which causes cyclic adenosine monophosphate (cAMP) to build up and enhance lipolysis (fat burn)6–8.

One human trial with soccer players has shown yohimbine to actually improve the rate of fat loss9, but it should be used in a fasted state and/or close to exercise for best results. Taking yohimbine with meals is not advised since insulin negates the effects10.

Yohimbine is commonly sold as a fat burner due to the fact that it can stimulate noradrenaline (which helps mobilize fat stores) and due to its ability to inactivate the alpha-2-Adrenergic receptors (increasing the rate of fat burn or lipolysis). For yohimbine to have any effect as fat loss enhancer, the best way to use it would be prior to fasted morning exercise.

When it comes to the claimed effects on increasing erection quality and raising testosterone levels (which Yohimbe was originally formulated for), there seem to be some mixed results.

Although Yohimbe and yohimbine have been found to increase sexual desire (in rats11–13) and even slightly increase penile girth in humans14, they have also failed to increase total testosterone levels and only marginally raised free-testosterone levels15. As for how effective it is for erection quality – when paired with L-arginine – yohimbine can provide a slight improvement in men with moderate ED, but the effect isn’t significant and it may be well due to L-arginine instead of yohimbine16.

Since yohimbine can also increase cortisol and worsen the feelings of anxiety and fear in people subjective to them17,18, it might as well worsen erectile dysfunction in men who’s condition is related to performance anxiety rather than impaired blood flow/vasodilation.

Yohimbine is ineffective as a testosterone booster. It might slightly improve erection quality when paired with arginine, but can be detrimental to the ED of people who have it due to performance anxiety.

Conclusion on Yohimbe and Yohimbine

Does yohimbine increase testosterone levels? Nope. Could it improve erection quality? Unlikely. Can it work as a fat burner? Possibly, if taken before fasted-training.

I have personally gone through a few bottles of Yohimbine HCL during my (occasional) fasted morning walks. I feel that it makes me drop fat slightly faster, but I’ve also noted it to be incredibly potent as a stimulant. Taking just 5mg results in significantly increased heart rate and sweating, coupled with slight anxiety, nervousness, and hunger…

…I’d recommend it for fat loss purposes only, and for people who can manage the use of stimulatory compounds.