Here’s a detailed list of 18 different foods that are known for their ability to decrease estrogen levels through multiple different pathways.

(Just like there are at least 30 foods that can stimulate testosterone production).

One could say that these foods base the foundation of an anti-estrogenic diet, you know, a normal man’s diet with anti-estrogenic foods along with androgenic testosterone boosting foods.

That would base the foundation for the ultimate anti-estrogenic androgenic testosterone boosting diet. A diet that would boost muscle-mass, improve workout-performance, stimulate beard growth, increase confidence & libido. 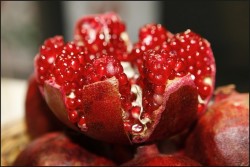 Pomegranate is one pretty awesome fruit and I believe that all guys should bulk up with it.

There seems to come new studies about the health benefits of this magical fruit every week now.

First I found out about this study, where the researchers found out that after 2 weeks of drinking pure pomegranate juice, their participants salivary testosterone levels increased by a nice 24% on average.

The very same study also found out that both, systolic and diastolic blood pressure dropped by a very nice 20% on average.

Then this study found out that 3 solid years of drinking 1,7 oz pomegranate juice daily, reduced arterial plaque by a staggering 35% on human subjects.

Most recently researchers have also found out that certain compounds in pomegranates are anti-estrogenic.

There’s also this study where the researchers saw that pomegranates inhibited aromatase enzyme (which is the enzyme that converts testosterone into estrogen).

So the next time someone asks you what’s a healthy fruit that lowers estrogen, you know it’s pomegranates. 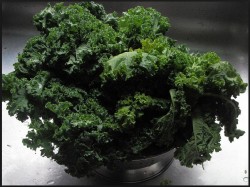 Cruciferous vegetables are one of the staples in the anti-estrogen diet.

They all contain this compound called DIM (3’3 diindonylmethane) and even more powerful compound IC3 (Iindole-3-Carbinol) which helps your body to remove estrogen trough liver.

DIM isn’t even the only thing why cruciferous veggies are anti-estrogenic. Many of them also contain huge amounts of clorophyll (leaf green) which is also known for its estrogen reducing effects through improved liver health. Not to mention that most of the vegetables in the cruciferous family are also loaded with plant sterols (which furthermore lower estrogen).

What are cruciferous vegetables? 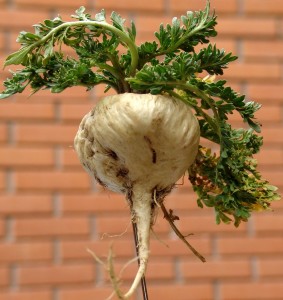 Maca is called a herbal supplement, but, basically it’s food, like a super nutritious root vegetable, or a potato in steroids.

It’s mainly used for testosterone boosting purposes, even though there’s some inconclusive evidence in those regards.

But one thing about Maca is for sure, and it’s the fact that it has some estrogen lowering purposes.

That’s because Maca is also classified as a cruciferous vegetable, which actually contains more estrogen lowering DIM compound than any other cruciferous veggie I’m aware of.

Olive oil is one of the oils that all men should introduce into their diets.

…Also olive oil is ridiculously high in this compound called lutreopin, which in this study was seen to inhibit aromatase enzyme in the body (aromatase converts testosterone into estrogen).

So if you’re not yet a fan of olive oil, then read this post, and get yourself some organic extra virgin olive oil as soon as possible.

Countless of mushroom varieties have been studied for their anti-estrogenic effects.

For example, this study found out that white button mushrooms have aromatase inhibiting properties.

Then this study found out that Shiitake mushrooms inhibited aromatase.

Also, various other mushrooms have been studied for their estrogen lowering properties.

Red grapes and the wine that’s made out of them contain some very powerful anti-estrogenic properties.

For example: they’re loaded with reservatrol and various other polyphenols which are known for their estrogen lowering effects. Reservatrol may also increase testosterone and inhibits aromatase.

…And the skins are loaded with this flavonoid called quercetin, which is anti-estrogenic and increases nitric oxide synthase. 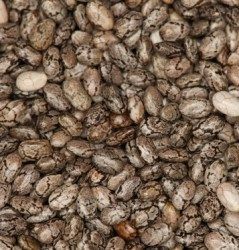 Countless health bloggers and nutritional “guru’s” are claiming that flax seeds are awesome for guys.

…But nobody really talks about the fact that flax is one highly estrogenic plant containing huge amounts of natural phytoestrogens.

But where am I going to get my omega 3’s if I stop consuming flax seeds and flax seed oil?

Chia seeds are almost identical with flax seeds if we take a look at their nutritional profile, they’re both high in omega-3’s and they both have a lot of vitamins and nutrients packed in them.

So it would be wise to leave those flax seeds for your girlfriend and get yourself some real chia seeds instead.

NOTE: Chia seeds can absorb 12 times their mass of water in them, so if you soak them in water for about ten minutes. The seeds turn into a nice healthy pudding, one that actually tastes good.

I’m not really a fan of grain products, as they’re linked to inflammation and increased prolactin, both of which are linked to lowered testosterone levels…

…But there’s one grain that I still like to consume, despite the fact that it’s a grain.

Oats are filled with steroidal saponins (which boost testosterone and inhibit aromatase) and they’re also filled with plant sterols (which do the same as saponins).

NOTE: If you want to be healthy, then limit your grain consumption, but cut some slack to oats as they’re quite beneficial even though it’s also a grain. 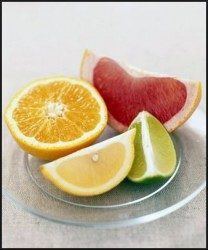 Citrus fruits are also kind of a solid staple in the world of anti-estrogen diets.

And that’s completely understandable as citrus fruits are rich in flavonoids and antioxidants.

In fact, all the following compounds in citrus fruits are known to have some anti-estrogenic effects:

Calcium-D-Glucarate, quercetin, limonoids, naringenin, along with most likely multiple other compounds too…

I like to make sure that my diet includes plenty of grapefruits, limes, and lemons, as they all taste pretty damn amazing and are extremely beneficial. 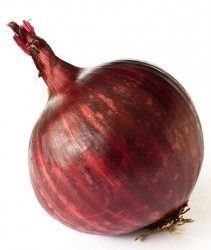 Onions can be used in multiple dishes. Throw them in with your meats, add them to sauces, pizzas, whatever you can imagine.

Why would I do that?

b) in this rat study, onion juice tripled their testosterone levels.

c) onions are filled with quercetin, which is a flavonoid that decreases estrogen and increases nitric oxide. 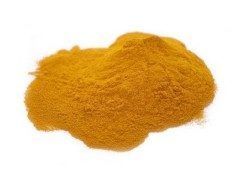 Turmeric has been praised to be one of the most healthiest foods in this planet.

It can be found in curcumin, and it’s for certain that you’ll find plenty of this stuff in your curry.

Why is turmeric good for men?

b) turmeric is anti-estrogenic.

Certain algae like spirulina and chlorella are most likely very anti-estrogenic foods.

(I see chlorella and spirulina both as a supplements to detoxify the liver, but if you ask a vegan they’ll probably say that this yucky shit is “food”, so what the heck, it’s in the list of anti-estrogenic foods now).

What makes these algae anti-estrogenic?

1. Spirulina and chlorella (the best kinds of algae) are both known for their effects on detoxifying the liver, and when your liver is clean then it flushes out estrogen with a much better rate.

2. Spirulina and chlorella are both extremely high in chlorophyll (leaf green), which has anti-estrogenic properties.

The benefits are probably very similar in other algae too, but I’m only familiar with spirulina and chlorella, as I’m not a vegan and I don’t really care that much about the green stuff to be honest. 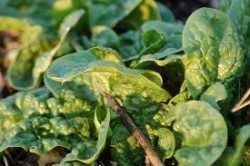 In the sub-heading above I linked a study that showed how chlorophyl (leaf green) is anti-estrogenic.

…There’s still quite a lot of leaf green in leafy green plants too (who would of have guessed?)

So that’s why my diet includes plenty of the following leafy green vegetables:

Spinach, kale, broccoli, cabbage, and that’s pretty much it. But I do eat a ton of spinach that’s for sure.

Fermented foods are really good for your balls and testosterone production (I’m serious).

It’s kind of a hard thing to explain why, because the whole world of probiotics and bacterial cultures is pretty complicated.

But let me tell you one thing that might help you understand why fermented foods filled with life bacteria are hugely important in the diet of a modern human:

We have 10 trillion human cells in our body, yet we harbor 90 trillion bacterial cells. So we’re really only 10% human 90% bacteria.

The big question is, why don’t we eat foods with live bacteria anymore? The primal male did, and he was healthy as fuck. Now we as modern men pasteurize everything and avoid all bacteria, and we’re sicker than ever. Maybe that’s because we should really eat bacteria?

But let’s not jump out of the subject:

Fermented foods with live bacteria are anti-estrogenic because they’re filled with organic acids, anti-oxidants, enzymes and probiotics that enhance gut function and eliminatory channels which helps your body to detoxify estrogen.

So drink that sauerkraut juice and get yourself some raw unpasteurized yogurt!

Coconut oil is good for testosterone production while it also has some anti-estrogenic properties.

The best thing for sure is the fact that coconut oil enhances the conversion from cholesterol to testosterone inside your leydig cells.

Coconut oil also stimulates the activity of 3beta-HSD and 17beta-HSD enzymes which stimulate testosterone production (see the study above).

The thing that makes coconut oil anti-estrogenic, is the fact that the oil (and whole coconuts too) is filled with sterols, which are anti-estrogenic and natural aromatase inhibitors (study linked above). 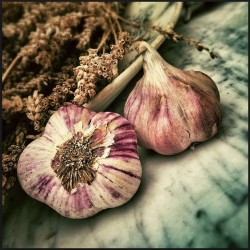 For one, when combined with vitamin C it drops blood pressure levels better than any known drug in the market.

And garlic has also been linked to increased testosterone production.

The thing that makes garlic anti-estrogenic is the fact that it’s loaded with quercetin (which is again the flavonoid that inhibits aromatase enzyme activity in the body while also increasing your erectile strength). 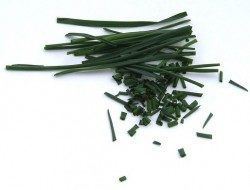 Chives belong to the same family of Alium’s as onions and garlic do.

…You see, chives are also loaded with natural quercetin…

…And like I have said few times already in this article, quercetin was the flavonoid that inhibits aromatase enzyme in the body, and the aromatase enzyme was the enzyme that converts your testosterone into estrogen. 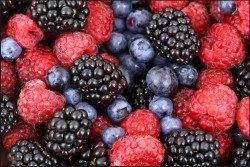 Dark berries such as the blueberry, elderberry, black currant, and chokeberry have about 50% more antioxidants and flavonoids in them than other berries.

Antioxidants and flavonoids like the anti-estrogenic quercetin and reservatrol…

..There’s also something else in that dark skin of certain berries:

They’re ridiculously high in this fiber called Calcium-D-Glucarate, which has an unique ability to bind into estrogen molecules located inside your intestines.

Calcium-D-Glucarate basically makes sure that those estrogen molecules really do get out instead of being reabsorbed into the body.

Got enough? There’s a 18 anti-estrogenic foods list above for you with science backing up each one of them.

Be sure to add these into your anti-estrogenic diet, and if you’re a true bad-ass, you can combine the estrogen lowering foods with testosterone boosting foods, which creates something awesome.

Thank you for reading.