It’s considered to be an “adaptogen“, which is a term coined by the Russian scientists to describe a herb that helps the body regain hormonal and psychological balance (homeostasis) in times of stress.

It’s claimed in Indian herbal medicine, that ashwagandha (which loosely translates to “the smell of horse”) would give its user the virility and power of a horse. Though, obviously that’s just some next-level ridiculous mumbo-jumbo bullshit…

…Don’t lose your hope on ashwagandha yet though, there are actually quite a few benefits:

What Are The Ashwagandha Testosterone Benefits? 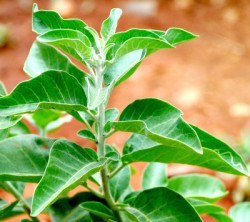 Even though the ancient herbal master gurus’ have made some downright stupendous claims, you should not forget the fact that ashwagandha actually has some pretty solid scientific evidence behind its claimed adaptogenic benefits.

No, you will not turn into a super virile horse-man.

Yet, some of the benefits of ashwagandha do include reducing stress, anxiety, inflammation, and cortisol levels, improving sperm quality, boosting testosterone levels, improving the quality of sleep, strengthening the immune system, even balancing blood lipids.

The most beneficial (and effective) form of supplemental ashwagandha seems to be a water extract called “KSM-66 Ashwagandha” (affiliate link), its claimed to have the highest standardized amount of withanolides (upwards of 5%), which are the active compounds believed to cause the beneficial effects of the herb.

Here are the ashwagandha testosterone benefits:

a) Since ashwagandha is an adaptogen, it should reduce stress, anxiety, and balance stress hormones (mainly cortisol). To my surprise, ashwagandha is actually well-proven to do all of those, while also improving subjective well-being. Take this well-done double-blind placebo study for example, where 300mg’s of KSM-66 ashwagandha given to human subjects for 60 days, was able to slash cortisol levels by 27%, while also greatly reducing anxiety and mental-stress in the test subjects. Another study with KSM-66 noted 14% reductions in cortisol, while in one study which used 5g of the root powder, up to 32% reductions in cortisol were noted in subject males who suffered from stress-related infertility. Multiple animal studies have come to same conclusions: ashwagandha supplementation consistently reduces cortisol levels and improves many stress-related symptoms.

b) When it comes to general health benefits, there are many. For instance, ashwagandha can greatly improve cardiovascular health by reducing inflammation, reducing the amount of serum triglycerides, increasing the “good” HDL-cholesterol (~17%), and reducing the “bad” LDL-cholesterol (~9%). In one human study, ashwagandha was able to increase serum T-cell count, and killer-cell count, suggesting that it can boost immunity. At 250-500mg/day KSM-66 extract has also been shown to increase hemoglobin levels, which might be one of the reasons why ashwagandha constantly outperforms placebo-pills in studies examining power-output and anaerobic exercise capacity. One of the more recent studies published this year (non-sponsored, double-blind, placebo, peer-reviewed, aka. highly reliable kind) found out that 600mg/day of KSM-66 ashwagandha significantly increased muscle strength and recovery in 57 young male subjects.

c) So ashwagandha is, in fact, a pretty solid adaptogen, with a wide variety of benefits that have been proven in human studies, what could be better? Maybe the fact that there’s also solid evidence of the herb also increasing testosterone levels (actually that’s not a surprise, considering the fact that ashwagandha improves sleep quality, reduces cortisol, increases HDL-cholesterol, and reduces inflammation, all of which promote healthy testosterone production). Two human studies with infertile subjects (study, study) both using 5g/day of the basic root powder for 90 days, noted significant increases in testosterone (~40% and ~16% on infertile subjects and 15% in healthy subjects) with significantly improved sperm quality. One study with infertile men as subjects (this time with 675mg/day of KSM-66 for three months) showed a ~17% boost in T, with a ~36% increase in luteinizing hormone (LH), suggesting that ashwagandha stimulates testosterone production at the brain level. Prior to 2015 there were no studies on healthy men that would show increases in testosterone, however, the study with 57 young and healthy male subjects as described in the paragraph above (using KSM-66 extract), showed a significant ~15% increase in testosterone levels (average rise from 630 ng/dL to 726 ng/dL, which is a lot from a single herb if you ask me).

Ashwagandha is – in my opinion – one of the better, if not best, testosterone boosting supplement out there. It’s not that popular, however, it’s well-researched, and has much more evidence behind its back than many of the more “popular” T-boosters.

I personally recommend this Aswagandha brand (affiliate link), but any other brand that chooses to use KSM-66 is good in my books.

Heck, even if ashwagandha wouldn’t do anything to testosterone, I would still continue using it. The benefits that this herb has on my sleep quality are something I have never experienced with any other herb (and I’ve tried MANY) before.