Avena sativa or “the common oat” is the grain most people should be already quite familiar with.

There seems to be this general consensus among the bodybuilding world that oats and avena sativa supplements (which are basically glorified oat straw extracts) would be anabolic and pro-testosterone.

I have seen many claims about oat straw being used as a compound that would “regain hormonal balance” in men with low testosterone levels, without ever really seeing any proof of it.

In this article, we will take a closer look on the claims and research behind avena sativa, and whether it deserves to be called anabolic or not. 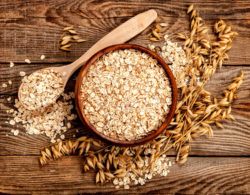 After learning about the possible relationship with grains, gluten, prolactin and lowered testosterone levels1–3, I reduced my intake of gluten-rich grains.

However, oats aren’t that dense in gluten, and they were touted to contain steroidal saponins closely related to testosterone.

So I was – for quite some time – under the assumption that eating oats could be a good decision in terms of testosterone optimization.

Only recently, I started digging a little deeper on the topic of oats and testosterone, just to find that they might not be that great after all. Or at least, there would be absolutely no reason to actually supplement with avena sativa supplements.

Not so surprisingly, there wasn’t much of any research that would of have directly looked into the effects avena sativa has on testosterone production. Only thing I found were countless of articles rambling about similar jargon of “Avena sativa has been used for centuries, it’s been told to improve hormonal health and masculinity…” but with this kind of alt-med bullshit talk, you can only guess that there is never any actual cited research.

I had to dig a little deeper and start looking at the effects that isolated compounds within the oat straw have on hormones.

One of the principal compounds in avena sativa is a polysaccharride by the name of β-glucan, which has been found to suppress cholesterol production4. As to be expected, it’s hailed as some miracle compound, but like many of you already know, pointless reductions in cholesterol (unless its already abnormally high) often bring about reduced production of all steroid hormones (since cholesterol is the raw material for those5).

This seems to be the case with beta-glucan too. As a patented β-glucan supplement called Antrodan®, was tested in rodents and found to significantly suppress testicular size, reduce testosterone levels, and inhibit 5-alpha reductase enzyme and DHT6. In other words, β-glucan is an antiandrogen.

There are few other reasons why oats and avena sativa supplements might not be the best thing for testosterone, as oat straw is fairly high in pythic acid (which blocks absorption of several micronutrients7) and the fatty-acid content of oats is pretty high in testosterone suppressing omega-6 polyunsaturated fats.

Eating oats occasionally shouldn’t be enough to suppress your testosterone levels to any significant degree.

But I would argue that there’s absolutely no reason to claim that avena sativa supplements would be anabolic or increase testosterone. Quite the opposite, as their high content of β-glucan likely brings about antiandrogenic effects. At least it did so in rodents.

There are many proven supplements that are actually anabolic and well-proven to increase testosterone levels, so there’s really no need to look into avena sativa supplementation anyway. It’s simply an over-glorified oat extract with no benefits and a big price tag.