The testosterone supplement industry has been booming for the past years, frequently coming up with new possible herbals to raise natural test production.

Bulbine natalensis is one of them that was briefly hailed as the best of them all and then almost completely forgotten just months later. In this article, we will go through all the research and real evidence behind bulbine supplementation, and whether it really raises testosterone levels.

We also look at why bulbine natalensis came somewhat of a supplemental non-starter and why you might want to be cautious with its use. 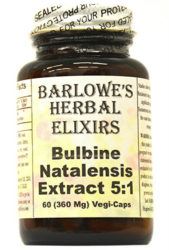 The bulbine natalensis plant grows primarily in Africa, the following active ingredients have been identified from the herb1;

At its country of origin, the primary use of bulbine is for anti-diabetic and anti-fibrotic benefits, as well as some cosmetic applications in form of creams and soaps.

When it comes to its purported testosterone boosting benefits, the first evidence came from the African Yakubu et al. who are the same group of researchers that published the first evidence about another popular African “T-booster” called Fadogia agrestis.

If you’re familiar with the story of Fadogia, you already know that it was first hailed as a potent testosterone raising herbal supplement, but later showed toxicity in the testis, liver, and kidneys. The story of bulbine natalensis is unfortunately quite similar.

The first evidence of bulbine natalensis was published in 2008 at the International Journal of Andrology by Yakubu et al1. where the researchers state that “bulbine natalensis could be used in the management of disorders of desire/libido, premature ejaculation and erectile dysfunction in males.”

In their study, Yakubu et al. administered three different dosages (25mg/kg, 50mg/kg, and 100mg/kg) of water-extracted bulbine natalensis to male Wistar rats for 14-days (they also had to control group, and for some strange reason a group of rodents receiving 50mg/kg Viagra).

What they found out was that during the 2-week study period, testosterone (serum and testicular) and LH levels increased significantly. The 50mg/kg group noted the best improvements, followed by the 25mg/kg group. Strangely the group of rats receiving the highest dosage saw no significant changes in testosterone. 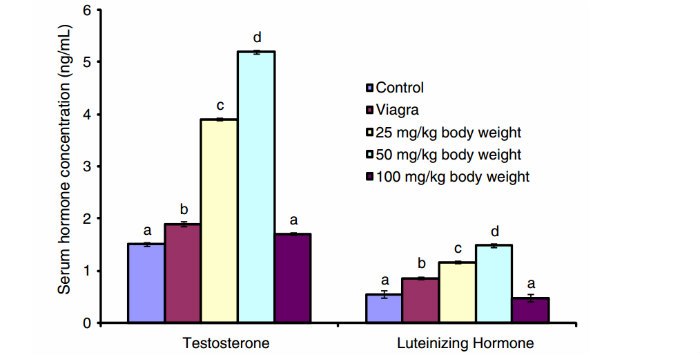 In 2009 Yakubu et al. published another study of bulbine natalensis in rodents using the same dosages2. They found that 50mg/kg was again the “optimal” dosage, increasing testosterone levels by a staggering 346% relative to control, whereas the 100mg/kg resulted in lowered testosterone levels.

At this point two rodent studies had showed massive improvements in both testosterone and LH levels, with accompanied improvements in testicular weight, mounting frequency, erection quality, and even ejaculation latency. No wonder the supplement industry was raving, but there was more to come.

In rodents, dosages of 25, 50, and 100mg/kg have all resulted in elevated liver enzymes and histological changes to liver tissue, accompanied by similar adverse effects in the kidneys3. These effects indicate toxicity and could provide an explanation as to why the highest dosage of 100mg/kg was seen to lower testosterone levels even though the 25 and 50mg/kg dosages raised test production.

In healthy humans, increases in liver enzymes have been noted with the bulbine natalensis supplement ProLensis™, suggesting that the negative effects on liver health are not limited to rodents. Although the researchers claim that this is not “clinically relevant”, it’s good to remember that this is, in fact, a supplement company-sponsored study on already established brand4.

Similarly to Fadogia agrestis, bulbine shows very impressive results in rodent studies, but then also shows some toxicity in the liver and kidneys.

If it wasn’t for the apparent toxicity, I would say that bulbine supplements look really interesting, but even if the 346% increase in testosterone would take place in humans (which has not been studied), the risk of side effects (which are similar to those seen in oral steroids), would still make the use questionable.

If however, you decide to give bulbine natalensis a try, consider getting the pure extract from Barlowe’s (affiliate link), just remember to monitor your liver enzymes during the use.