Butea Superba (Red Kwao Krua) is an androgenic herb widely used among the males of Thailand as an aphrodisiac and to improve erectile quality. There’s only a limited amount of studies available to prove its aphrodisiac effects, but what we know about the plant currently, is still quite interesting.

In fact, Butea Superba has a really weird composition. It contains phytoandrogens and also phytoestrogens, however then it also contains anti-estrogenic compounds which could potentially balance out the estrogenicity of the plant.

Butea Superba as a Testosterone Booster 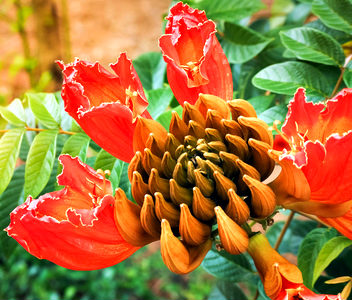 The reason why Thai men use Butea Superba is that they believe that it is a supplement that improves their libido and erectile quality.

However, the scientific evidence for this is lacking.

Even though it works well in test tubes and in rodents (study, study), human studies have failed to replicate the erection improving effects.

NOTE: To be more precise, human studies have not exactly failed to replicate the effects, but they have been so poorly misconducted that the evidence is hard to take seriously (one, for example, claimed the herb to be as effective as Viagra, then, later on, stated that the results were probably false-positive).

But what about the claims of Red Kwao (Butea Superba) being androgenic? Well, there could actually be some truth behind them:

b) In this human study which lasted for 3 months, 1,000 mg/day of Butea Superba was able to increase testosterone levels by 11% in men with erectile dysfunction. DHT or any other measurements indicating increased androgenicity were not tested for in the study (unfortunately).

c) One of the active compounds in Butea Superba (3,7,3’Trihydroxy-4′-methoxyflavone) is a strong cAMP phosphodiesterase inhibitor, meaning that it prevents the inactivation of cyclic adenosine monophosphate (cAMP), which is a secondary messenger between cells and hormones. In theory, this should increase testosterone levels (for example forskolin is a herb that increases cAMP, and because of that it also increases testosterone and activates androgen receptors).

d) There is a case study where one 35-years old Thai man was diagnosed with hyperandrogenemia after using an unreported dose of Red Kwao for “a few weeks”. In fact his lab tests showed his DHT levels to be at 1512 pg/mL (reference values are between 250-990 pg/mL) and his principal “side-effect” was, as you can guess, a very high sex drive. After closer inspection by medical experts, the “problematic” source of this increased androgenicity (read: masculinity) was found to be Butea Superba, which the man said he had been taking to prevent hair loss. The man was then told to stop the usage of B. Superba, and one week after cessation of the herb, his DHT levels had returned back to normal and his sexual drive was also back to “normal”.

Butea Superba is a weird herb. There is some evidence that it could cause androgenic effects in the male body, and there is a theoretical explanation to these effects too: phytoandrogens and the possible cAMP boosting effects.

Does it work or not? Honestly, I have no clue, but it’s an interesting herb for sure. I would love to see more studies that would look at its direct effects on DHT.