Caffeine and Testosterone: Coffee for AR Activation and cAMP?

If you’ve been reading my older posts here, you already know that I’ve been somewhat of an anti-coffee guy in the past. That’s because research has shown time after time that caffeine consumption leads to dose-dependent increases in cortisol secretion through stimulating the adrenal cortex…

…And elevated cortisol has been linked to lowered testosterone levels.

Here are the mechanisms of action behind cortisol’s testosterone suppressing effects if you’re not yet familiar with them:

Based on that it would make great sense that coffee – which increases cortisol – would also lower testosterone levels. However, that seems not to be the case, at least if there’s any truth in the studies below.

Just take a look at this: 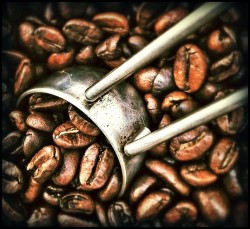 One day I was reading studies about caffeine and weight loss for my fat-burner article.

…At some point, however, I found 2 very interesting studies. One where caffeine ingestion was able to increase anaerobic performance and muscle endurance, and another one where pre-workout caffeine increased maximum muscular strength on bench press and leg press when compared to placebo.

To be honest, I wasn’t expecting that from a compound that stimulates cortisol release. Guess there’s a reason why the supplement industry uses caffeine as a base ingredient for most pre-workout supplements.

What I found next, was even more confusing (at the time):

a) This study showed that 4 mg/kg of caffeine taken 1 hour before exercise was able to raise testosterone levels by 12% in elite athletes when compared to placebo (cortisol was also increased by 21,3%).

b) This study showed that chewing gum with 240 mg’s of caffeine was able to furthermore increase exercise-induced testosterone boost by 14% when compared to placebo. What’s odd is that cortisol actually decreased in this study (probably due to the chewing motion which according to research, reduces stress).

c) In this study, the researchers gave their subjects different doses of pre-workout caffeine (200, 400, 600, and 800 mg’s). In all groups, exercise-induced testosterone release was boosted by the ingestion of caffeine, and the increase was most significant in the group that received 800 mg’s of caffeine (19%). Cortisol increased by 44% in the group which received the highest dosage.

d) One mechanism of action for this occurrence could be the fact that caffeine is a non-selective PDE inhibitor, meaning that it can inhibit the PDE-4 enzyme, which breaks down cAMP (cyclic adenosine monophosphate). As cAMP is a secondary messenger between cells and hormones, it’s believed that higher cAMP levels in cells could increase testosterone levels (one great example of this is forskolin). As caffeine can inhibit the PDE-4 enzyme, and therefore prevents the break down of cAMP, in theory, this could be the reason why the above studies showed increases in testosterone, despite the fact that cortisol was increased simultaneously.

e) A 2017 placebo-controlled study showed that when sleep deprived men (been awake for 24-hours) are given 6mg/kg of caffeine before aerobic exercise, their testosterone to cortisol ratio (T/C) improves significantly. The researchers write: “An increase in mean testosterone concentration post-aerobic exercise was only observed in the sleep-deprived with caffeine ingestion state”.

Bottom line: Caffeine supplements or coffee pre-workout once in a while might be a good idea. It seems to increase testosterone levels, despite the fact that it also raises cortisol. This could be due to the cAMP activation, the increased thyroid hormones, antioxidant content, or something completely different. Anyhow, it seems to work.

Even though caffeine increases cortisol levels (in most studies) – and cortisol is linked to low testosterone – it still has a testosterone boosting effect when taken pre-workout (possibly due to cAMP stimulation).

So caffeine might not be that bad after all.