When it comes to the subject of how much to eat for weight loss or to get more muscle mass, people can be divided into two camps: the ones who claim that calories don’t matter, and the ones who say that calories are what weight manipulation is all about.

To make sure that this article doesn’t turn into a fight between the two camps, I want to make one thing perfectly clear.

Calories are what its all about. You can’t lose weight without being on a calorie deficit, and it’s very hard for your body to synthesize new muscle tissue if you’re not on a calorie surplus. This is not an opinion, it’s a scientific fact.

In fact, the only studies where calories don’t seem to matter that much, are the ones where the subjects report their own caloric intakes to the researchers. These kinds of studies are notoriously inaccurate and shouldn’t even be published since the human species is extremely inaccurate at estimating its own calorie intake.

RECOMMENDED: If you still believe the age-old fitness industry bogus, such as; “eat six small meals a day to stoke the metabolic fire”, “no carbs in the evening as they cause weight gain”, or the classic “protein every 3-hours or catabolism”, you’ve been straight on lied to. Don’t believe me? Well, read Brad Pilon’s Eat Stop Eat with over 300 peer-reviewed citations to get your facts straight and make your life nutritionally much much easier. 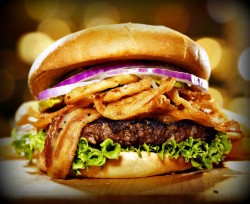 Dieting is notorious for its testosterone lowering abilities, and usually, the bigger the calorie deficit, the harder the drop in testosterone.

Why it happens is fairly simple: when you don’t eat enough to support your body’s multiple mechanisms, it eventually has to shut/slow down some of them. As the reproductive system is not essential for short-term survival, that’s one of the first ones to slow down to spare energy for more vital functions of the body (study, study, study, study).

The catch-22 here is that if you’re already fat, then being on a slight calorie deficit can actually increase your testosterone levels. This is because any extra fat mass that you have increases aromatase enzyme activity, which converts testosterone to estrogen. By lowering the activity of this enzyme via burning away the fat mass, more testosterone is left unconverted (study, study).

So to sum up the above: Eating less than your body uses (creating a calorie deficit) is linked to lowered testosterone production, and the reduction in T usually goes hand-in-hand with the magnitude of the deficit. However, as the calorie deficit forces your body to burn away the adipose tissue (fat mass), your testosterone production can improve at the same time, creating a situation where serum testosterone levels usually don’t change that significantly.

But what if you’re already lean, with very little fat mass to burn?

Answer: Then it’s an entirely different situation. For example, natural bodybuilding competitors who get down to >5% body fat, usually experience near castrate T levels. This is of course, with a combination of other factors too, not just the extreme calorie deficit (low-fat low-carb high-protein diet + exercise + metabolic slowdown + messed up thyroid function = hormonal disaster).

The good news are that the hormonal damage caused by larger calorie deficits are often completely reversible. Simply start eating normally with maintenance calories or with a slight surplus after you’ve met your weight loss goals and your testosterone should bounce back up in a matter of few weeks.

What about calorie surplus and/or overfeeding?

Answer: It makes sense that if a calorie deficit lowers testosterone levels, a surplus of calories or just eating roughly the amount that your body needs, would be beneficial for testosterone production. This is also supported by research.

One claim that I’ve ran into many times goes by saying that in order to boost testosterone levels, you’d have to gorge with food and eat a lot more than what your calorie needs of the day would be.

This could work well short-term, and the claim is often backed-up with a study which shows how short-term overfeeding increases testosterone levels. However, what is often left unmentioned, is that the study had only women as subjects (gender differences are hugely important when it comes to hormones).

Another problem with the idea of eating a calorie surplus in order to boost testosterone is the fact that you’d slowly get fat, which would increase your aromatase enzyme activity, and therefore boost the conversion from testosterone to estrogen. Getting fat would also reduce testosterone synthesis due to increased oxidative stress.

Bottom line: Even though eating a surplus of calories has been shown to increase testosterone levels short-term in few studies, it’s not a good long-term plan, because you would simply get fat, which would negatively affect T levels in the long run.

So how much should you eat anyway? Well, that depends on your goals and current body composition.

If you’re at above 12% fat, then, by all means, use a slight calorie deficit in order to get to 8-12% body fat levels and then once you get there, continue with maintenance calories or bounce around between slight deficit and slight surplus (mini cut/bulk cycles, etc).

If you’re already at the optimal body fat range for T production (about 8-12%) then by all means just eat a maintenance amount of calories, or a slight surplus if you intend to build muscle or get a short-term T boost.

In all of its simplicity, just get to 8-12% body fat, then eat enough to cover your daily needs so that you don’t get fat, but you’re also not eating too little so that your endocrine system functions as it should.