Cordyceps and Testosterone: The Killer Fungi

Cordyceps has gained quite some popularity in the past few years, largely thanks to few fellow Finnish guys (Four Sigmatic) who are being very innovative with instantized medicinal mushroom drinks.

There are some cool benefits – mostly around immune system function, cognitive functions, and antioxidant capacity – that can be attained by consuming mushrooms like Reishi, Lion’s mane, and Chaga. Cordyceps, on the other hand, is seen as more of a “sports mushroom”, as it’s claimed to increase VO2 max, endurance, and even testosterone levels. I’ve even seen it being called a natural performance enhancing drug too (as if that was a thing, to begin with).

So what’s the deal with this “performance enhancer fungi”, and does it even raise testosterone levels? Let’s find out. 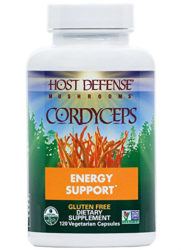 Before we get into the research, let’s look at what really is Cordyceps, and why in the World is it called “killer fungi”.

Cordyceps is a blanket term for a genus of mushrooms that holds in approximately 400 different species. The most common (and the one used in most supplements) is called Cordyceps sinensis.

Another one that can be found in some supplements is called Cordyceps militaris.

The nickname “killer fungi”, comes from the fact that out there in nature, cordyceps grows in a pretty crazy way. The spores make their way into insects through the air or other bugs and then completely attacks the host’s body by invading all of the insect’s tissue. Remarkably, the fungi also control the insect before it dies, making it to usually climb upwards and clench into a branch or something to allow an optimal growing environment for the mushroom.

After that, well, just watch the video below:

Don’t worry, if you’ve already used some cordyceps, you won’t be zombified. In fact, each of the 400 species of cordyceps specializes on their own host insects to use as vessels of growth.

In humans – as seen with many types of mushrooms – supplementing with cordyceps has been shown to powerfully stimulate the immune system. This is due to the fruiting body of the fungi containing unique polysaccharides that upregulate various immune system cells and reduce oxidative damage in the body1–4.

When it comes to the proclaimed sports performance-enhancing effect, cordyceps has been somewhat of a supplemental non-starter, with only animal studies showing reduced fatigue and stress5, and one human study showing small increases in lactate threshold. Other than that, it has been shown to not improve VO2 max or aerobic performance in humans6,7.

When it comes to hormones, there’s plenty of cell culture and animal research examining the mushrooms effect.

Preliminary cell culture studies have actually shown that Cordyceps can inhibit testosterone production in Leydig cells stimulated with cAMP and HcG, by suppressing the natural conversion of cholesterol into pregnenolone (which is needed as “raw material” for testosterone synthesis)8.

However, in other studies (with isolated testicular cells NOT already stimulated with cAMP and HCG), researchers have seen that cordyceps increased the release of testosterone from the Leydig cells9,10. When orally administered to rodents, cordyceps has also shown to dose-dependently increase testosterone levels11,12, but then again on other studies it has failed to have any effect on hormones when added to the rodents feed13.

When directly injected to the rodents, cordyceps led to a massive 280% increase in testosterone levels by stimulating StAR (steroid acute regulatory protein) in testicles13. StAR works by shuttling cholesterol into the inner membrane of the Leydig cells through a mechanism that is currently unknown to the researchers. In any case, StAR is a rate-limiting step in testosterone synthesis, and if a compound can increase StAR, it’s almost guaranteed to enhance testosterone production too.

The fact that cordyceps also increases sperm content and quality without affecting the pituitary hormones; LH & FSH12, suggests that if it increases testosterone, it likely does this with direct testicular stimulation, as explained above, probably through increasing StAR.

Cordyceps is a potent immune system booster but doesn’t really deliver on its performance-enhancing claims.

When it comes to testosterone, there are no human studies, but at least according to the cell culture and animal studies, there is a mechanism for it to stimulate testosterone production (StAR). However, the fact that it needs to be injected for significant changes, suggests that it has low bioavailability in the body when consumed orally and might as well do nothing if it doesn’t reach its target.

I occasionally drink the instant cordyceps hot drink from Four Sigmatic (affiliate link). The taste is absolutely amazing and I feel like it delivers some cognitive benefits. However their formula uses licorice and mint for taste, and since both of these can suppress testosterone production, I’m hesitant to recommend it to anyone who wants to maximize their hormonal health.

If you want to experiment with cordyceps that has no mint or licorice in it, get the Host Defense Mushrooms brand (affiliate link).