Chrysin is probably one of the most well known estrogen blockers out there. Yet I have never talked about it on this site.

After a flood of emails about the supplement, I’m finally addressing chrysin in this blog, but do I use it myself, and does it even work? 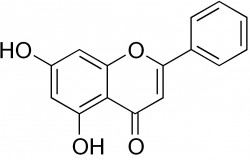 Chrysin is a naturally occurring flavonoid in the passion flowers, honeycombs, certain mushrooms, and in chamomile.

It has quite a reputation as an aromatase blocker, and it’s one of the basic ingredients in most estrogen blockers.

Not only is chrysin found in natural supplements, it’s also added to most testosterone gels such as androgel, to block topical aromatization (testosterone converting to estrogen).

So chrysin certainly is not a new thing on the block…

…But does it work? And what does the science say about this natural estrogen/aromatase blocker?

Does Chrysin Work as Advertised

I’ve been researching herbs, supplements, bodyhacks, exercises and all sorts of stuff for the past years, always trying to find stuff that impacts our natural testosterone production.

On the side, one thing that has fascinated me has been to find out how to drive down male estrogen levels. Obviously lowering estrogen has huge benefits as this upregulates the GnRH release in the brain, ramping up testosterone production.

This is simply what happens:

That’s why all guys should actively do stuff that promotes testosterone and reduces estrogen. Therefore reducing feminine hormones while boosting androgenic male hormones.

And that’s pretty much where chrysin is claimed to be the next best thing since sliced bread.

According to the supplement manufacturers and some health “guru’s”, it works by blocking the aromatase enzyme activity inside the male body, and when your aromatase enzyme is suppressed, then your body won’t convert testosterone molecules into estrogen molecules.

But does chrysin really block aromatase enzyme that effectively, or is it just another hyped up supplement?

Let’s take a closer look at the research:

Chrysin rose to popular knowledge as an aromatase inhibitor and estrogen blocker, when this study done back in 1984 found out that in high doses, chrysin flavones extracted from the passion flower plant, inhibited aromatase enzyme activity in vitro (not inside the body, but in a petri dish or a test tube).

More than 20 years after the first study, another in vitro study rolled into the scene, which also showed that chrysin was able to block estrogen in a test tube, but the researcher didn’t test the flavone inside a human body, not even inside an animal body.

Based only on those 2 in vitro studies, bodybuilding supplement companies quickly started marketing chrysin for gym rats by calling it a scientifically proven natural estrogen blocker. Soon the alternative medicine group jumped in and started manufacturing natural supplements out of chrysin, and even the biggest testosterone gel companies started adding it into their testosterone creams and gels to block aromatase enzyme.

But then comes the harsh reality…

…When chrysin is tested inside a human body, and inside an animal body, there is no significant aromatase inhibition to be seen.

This Finnish study for example, found out that in vivo (inside the body) chrysin has no effects on the aromatase enzyme.

Then this study rolls in and shows that chrysin yet again failed to do anything inside the human body.

But why doesn’t chrysin block estrogen inside the body, when it does so inside a test tube? There could be many answers to that questions, however these studies found out that the human cell membranes effectively block chrysin from entering the cells and having any effect at all on estrogen levels in organisms [study, study, study].

So now you know the reason why I don’t use chrysin, nor why I really haven’t talked about it in the past.

It’s just useless. Nobody really seems to address the actual studies. Everybody just blindly claims that chrysin is “the best” natural estrogen blocker.

Yeah right. In petri dishes for sure but not in the human body.

So don’t fall prey on the marketing of that greedy bodybuilding supplement industry, they’ll claim that chrysin blocks estrogen as long as people believe that and buy their products.

Those posts will help you with blocking estrogen much much more than any chrysin supplement in any dose will ever do.