And even though some hippie “alternative medicine” people like to claim that it doesn’t work and is “pure evil conspiracy”, there’s plenty of evidence to show that it does protect the teeth by reinforcing the enamel shield.

With that being said, I have been actively avoiding fluoride for roughly 3 years now. That’s right, I use fluoride-free toothpaste, I have a tap water filtration system that filters away fluoride under my sink, and I try to avoid fluoridated foods and/or foods high in naturally occurring fluoride (as a side note, my teeth are still in great condition without any extra fluoride use).

The reason behind my – as some might say “crazy” – fluoride avoidance?

It’s a well documented fact that fluoride can disrupt normal testosterone and thyroid hormone production. This is due to the facts that fluoride is toxic at low levels in the human body and causes oxidative stress, it can displace iodine from androgen receptors and thryoid gland, and it can adversely impact testicular cells and enzymes needed for healthy testosterone production. 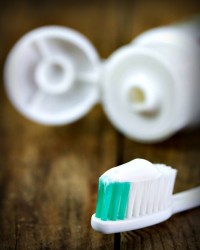 There’s a good reason why every toothpaste package has a warning that states how small children should never swallow the contents.

And that “just a pea-sized portion is enough”. This is so that the fluoride would only go topically to your teeth (where it protects the enamel), but not so much into your digestion and circulation (where it acts as a neuroendocrine toxin).

Much like the other light halides (chlorine and bromine), fluoride can displace iodine from human cells, when that happens inside testicular Leydig cells, Sertoli cells, androgen receptors, and at the thyroid gland, you’re in for a hormonal disaster.

However, the displacement of iodine is nowhere near the only negative side effect of ingested iodine. It can also increase oxidative damage in testicles, reducing the protective antioxidants and impairing enzyme signaling needed for healthy testosterone production.

In case you need some research to believe it, here’s what a quick search gets you:

a) Fluoride anions that come in contact with calcium ions in the body form a compound called calcium fluoride, which can mess up with the function of many neuroendocrine glands, causing calcification and impaired protein signaling (study, study, study).

c) In a human study where males from a high-fluoride water area were compared against males from an area with low-fluoride water, the males who were exposed to higher amounts of fluoride had 40% lower serum T levels on average. This study was replicated with a larger amount of subjects in 2010, with similar conclusions: “the serum level of T in men of fluoride polluted district was significantly less than that of control group”.

d) In this human study, it was noted that people who suffer from skeletal fluorosis (too high intake of fluoride, aka. fluoride toxicity), have significantly lower testosterone levels when compared to control subjects.

e) In this 2003 human study, it was seen that even lower doses of 2-13 mg/day of fluoride are capable of significantly lowering free testosterone levels.

NOTE: Fluoride also accumulates in the body, so the problem is not only caused by high acute exposure to fluoride but also because we’re constantly exposed to it at lower doses. Major sources of fluoride being; unfiltered tap water, fluoridated salt, toothpaste, and certain foods naturally high in fluoride (black tea being the worst offender).

Fluoride does prevent tooth decay by reinforcing the enamel shield of teeth. However, it’s also a toxic endocrine disruptor even at low environmental dosages.

Which is why you don’t want to mess around with the stuff if your goal is to increase testosterone levels.