3 Big Myths about Intermittent Fasting that Need to Die

Over these few past years, the popularity of intermittent fasting or ‘IF’ has exploded. Though the patterns of short-term fasting are thousands of years of old, the idea of “skipping meals” or pushing them for later has only surfaced in the fitness world few years ago. This has raised a lot of eyebrows in the fitness community, and also surfaced a ton of myths.

The common misconception about short-term, aka. intermittent fasting is that it would be just another fad-diet that soon goes away. The problem with that ideology is that IF was never a diet, it doesn’t tell you about foods to eat, nor about foods not to eat, or even about any macronutrient ratios.

Intermittent fasting can be done with maintenance calories, calorie deficit, or with a caloric surplus, you can do it even if you don’t track your caloric intake at all. That’s simply because intermittent fasting is all about meal timing. More specifically, about spending more time in a fasted state than we usually do.

There are many different popular patterns of IF, including;

Greg O’Gallagher’s fasting patterns that are seen in many of his KinoBody programs usually have a more relaxed approach to fasting (skip breakfast, push your first meal closer to noon/evening).

[easyazon_link identifier=”162336518X” locale=”US” tag=”anabmen-20″]Dave Asprey’s BulletProof Intermittent Fasting pattern[/easyazon_link] tries to tell you that you’re in a fasted state after consuming a breakfast coffee with ~400 kcal worth of butter and MCT oil, the idea is a huge failure but the “butter coffee is so awesome” minions love it…

NOTE: After doing IF for roughly 3 years now, I can say that all of the patterns above – with he exception of the BulletProof method – do work. Whether you use one of those or craft your own is just a matter of preference. Just remember that true weight loss/gain always comes down to the caloric balance, not necessarily meal timing.

(A lot of the studies used in writing of this post were pulled from Brad Pilon’s fantastic book, Eat Stop Eat. I recommend everyone who wants to learn more about IF or nutrition in general to take good look at it) .

What about the common IF myths? Let’s check out some research to bust three of them: 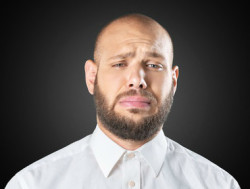 Because of the fact that you need to eat adequate amounts of macronutrients (protein, carbs fats), sufficient amount of micronutrients (vitamins & minerals), and good amount of calories for your body to produce testosterone, it makes a lot of sense that many myths pair short-term fasting with lowered testosterone levels.

…Then there’s one study that went all extreme on the topic as the subjects fasted for 10 consecutive days, as to be expected T-levels started to decrease. However, only at the 9th day did the drop in testosterone become significant.

That’s right 9-days with no food. And get this, after the 10-days of fasting the subjects were allowed to eat again (only a mere 1,500kcal/day), and once ‘they re-feeded’ testosterone levels shot up and were notably higher than the baseline from where the men had started ten days earlier. The researchers suggest that this “rebound” effect is related to androgen sensitivity (receptors becoming more sensitive towards male hormones), and indeed this similar effect where the body becomes more responsive towards testosterone, has been noted in a Swedish fasting study in 1989.

Well that’s for longer fasts? What about intermittent fasting?

If we take a look at the studies in which the subjects really fasted in a short-term “IF style”, we see that during 21-days, short-term fasting does not lower T-levels by a bit, and that short-term fasts still trigger those positive effects in androgen-sensitivity.

A common belief in some athletic circles is that short periods of fasting can cause your testosterone levels to plummet. There are a number of reasons why I was skeptical when I first heard this claim, but the most obvious to me was that I had done extensive research on Testosterone for a patent I was working on back when I was employed in the supplement industry. Consequently I knew that Testosterone levels are actually highest during the Morning after an overnight fast. These levels will be 20-30% higher than Testosterone levels found during the evening. The other reason I was suspect of this claim is the large body of scientific research revealed that the very act of eating can decrease testosterone levels in men.Brad Pilon

2. IF Slows Down Metabolic Rate 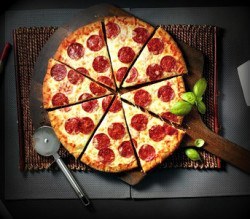 the myth of meal-frequency doing ANYTHING to metabolic rate is one of the most prevalent in the fitness circles. We are constantly bombarded with these claims that in order for your body to not enter the dreaded “starvation mode”, you need to be eating a steady supply of meals thorough the day.

Nothing could be further from the truth. There’s an endless pile of research to support the fact that the amount of daily meals – when overall caloric intake is kept the same – does not affect the rate of your metabolism.

A meta-analysis of multiple studies on the topic, found out that when two eating habits are compared for their effects on 24-hour energy expenditure, it makes absolutely no difference whether you “nibble” the foods thorough the day, or “gorge” all of your calories in one sitting. Another review study scanned through 176 studies, to conclude that there is no relation with meal-frequency, metabolic rate, and weight loss.

One study actually put their subjects into a metabolic chamber for 36-hours to see what happens to resting metabolic rate when the subjects eat either 3 meals or 14 meals with the exact same overall caloric content. As to be expected, there were no significant differences in resting energy expenditure between the groups. However a slightly increased rate of metabolism was observed in the group that ate LESS frequently.

One study on fasting showed that it took 72-hours of complete fasting to achieve a measly 8% drop in metabolic rate. That’s your starvation mode right there, scary right? I wish I never have to experience anything that crazy. I mean 8% reduction after 72-hours of water-fasting? Sounds like complete metabolic annihilation to me… 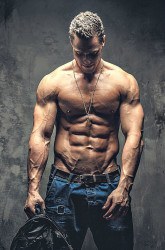 Having a lot of muscle is a great thing, it makes you look awesome, it makes you strong, it has a positive impact on your metabolic rate, is super healthy, and it surely amps up your confidence.

Because of that, it’s understandable how many guys are downright scared to lose all of their gains if they don’t eat multiple small meals a day, hitting their protein targets with all of them.

If you ask any average gym-rat, what would happen to the body after 16-24 hours of fasting, the answer would be a resounding “muscle loss!”. Now what we have there is an OPINION and usually from someone who has NO EXPERIENCE in the topic of fasting. If we want to know the real facts behind that question, we obviously resort to scientific studies with an open mind, not to some bro with a broken one.

Let’s start from this 2009 study which showed that intermittent fasting – when compared to standard eating pattern – did not increase, nor decrease, muscle breakdown rate. In other words, it did not matter whether the subjects ate their calories thorough the day, or in a much smaller window.

Even more surprising research comes from these two studies, which showed that after 72-hours of water fasting, muscle breakdown rate DID NOT increase from the baseline, and protein synthesis DOES NOT slow down.

The point here is that even if you would fast for long periods of time or be on a very low-calorie diet for extended period of time, your muscle mass will not melt away, AS LONG AS YOU USE IT. Yes that’s right, as long as you do some form of regular resistance training, which actives muscle mass, it will not melt away.

This has been neatly shown in a 12-week study on both men and women when they were only eating ~800 kcal/day with ~80g’s of protein in their daily meals. When they exercised 3 times per week with free-weights they did not lose muscle mass (a group in the study that did not train with weights, but instead did some cardio, ended up losing a whopping 9lbs of muscle mass).

Another study with obese men as subjects had the guys going on with only 1,000 kcal/day for a grueling 16-weeks and get this; they lost an average of 20-pounds fat, with no muscle loss. Why? Because they trained with weights 3x per week. Similar muscle preserving results were also seen in women who were put on extremely low-calorie diet for the same amount of time (they also did resistance training).

This goes directly in to the face of the fear-mongering fitness industry – who want to keep you believing that unless you guzzle down the protein shakes every 3 hours – your gains are goners forever.

But wait a second, if low-calorie dieting and even 72-hours of fasting don’t cause muscle loss, what does?

The answer is simple; inactivity. If you’re on a diet and you don’t use the muscle, it’s likely that you will end up losing some along with the fat. On all the studies above, the subjects were doing resistance training, but with those extreme deficits, if they wouldn’t have trained with weights, muscle loss would of have been inevitable. Have you ever noticed how bed-ridden people – even if they eat a lot – tend to lose a lot of muscle mass, especially in parts of the body that are casted? That’s the result of not using the muscle tissue, aka. the real cause of muscle loss.

There’s also another group of people who lose a lot of mass even if they exercise, and even if they stay active, and usually even if they eat a caloric surplus. That is, the people who stop using anabolic steroids after acquiring massive amounts of muscle on gear. When the body can’t meet the demand of anabolic hormones that used to come from an exogenous source (injections, gels, patches, oral steroids, etc) it gets to be really hard to “maintain the frame” naturally.

Bottom line: As long as you’re hitting the weights and/or not thinking about getting off of anabolic steroids after long-term use, there’s no reason to worry about muscle loss. Not if you’re fasting, and not even if you’re doing a low-calorie diet. It’s simply the inactivity and not using the lean tissue that “melts” it, and that has been proven by science, not by opinions of an average gym-rat.

If short-term fasting would cause muscle loss, reduced testosterone levels, or slow down the metabolic rate, I would of not have done it for the past 3 years or so.

It has been clearly proved in scientific research that as long as you do some sort of regular resistance training and are not a complete idiot when it comes to self-control, you will survive perfectly fine by fasting intermittently.

With that being said, if you disagree with any of the above or have any studies that challenge the ones presented above, please do link them in the comments section.

(A lot of the studies used in writing of this post were pulled from Brad Pilon’s fantastic book, Eat Stop Eat. I recommend everyone who wants to learn more about IF or nutrition in general to take good look at it) .