Dietary iron is considered to be an essential micronutrient and nowadays many foods are fortified with it. How iron affects testosterone levels and overall health is still a bit of a mystery to many people, and since it’s considered essential, many just shrug it off as “healthy”.

Iron is commonly associated with some important health benefits, like being part of hemoglobin and therefore essential in preventing anemia, but what most people don’t realize is that iron is also highly toxic even in relatively small dosages and that the human body tightly controls our intake within the gastrointestinal tract.

We are exposed to two types of iron through our diets;

When the body recognizes that there are too low amounts of iron stored, the iron-regulation hormone hepcidin is reduced to increase iron absorption from foods. Whereas when the amount of stored iron is too high, hepcidin levels naturally increase to prevent the gastric absorption of the mineral from foods.

Most of the time the hepcidin-system works well enough so that people don’t need to worry about their iron intake. However, eating foods with excessively high iron content, supplementation with iron, receiving blood transfusions, or being exposed to iron through other lifestyle factors, can easily shift this delicate balance and cause iron overload (hemochromatosis) in circulation and tissue. Some people also have hereditary hemochromatosis. These guys are genetically prone to iron overload and need to be very cautious about their dietary iron intake.

The RDA for iron is between 8-12mg per day. Doses as low as 20mg/kg per day can start causing noticeable health problems, and dosages exceeding 40mg/kg per day usually require a trip to the hospital.

Interestingly enough, between 1983-1991, excess iron was responsible for over 30% of deaths caused by accidental ingestion of drugs & supplements by children. So even though something is “essential” and “healthy”, taking too much can easily end up harming your health in ways many don’t even realize.

But why is excess iron so bad and how does iron affect testosterone? Let’s take a look. 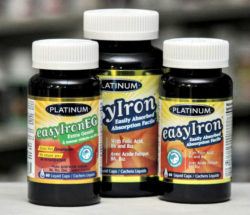 Iron is often grouped up with protective minerals like calcium.

In reality, its effects and fairly low point of toxicity suggest that it’s more similar to the likes of the heavy metals cadmium, aluminum, lead, nickel, and mercury.

Research has shown that both – too low and too high iron levels – in the brain, are strongly correlated with learning deficits and many of the neurological disorders of the brain (Alzheimer’s, dementia, Parkinson’s disease). In fact, the researchers of this Australian study were able to fairly well predict the occurrence of Alzheimer’s disease by monitoring their patient’s levels of ferritin, a storage protein of iron, which when elevated is associated with iron overload.

Too high levels of iron are also associated with liver abnormalities, diabetes, and cardiovascular disease. And as to be expected, reducing the excess bodily iron via blood donation is able to reduce many of these risks.

One Finnish study, for example, saw that from the cohort of 2862 men who the researchers followed for  9 years, those who donated blood for a minimum of once per year, had a staggering 88% lower incidence rate of acute heart attacks.

For about 50 years, it has been known that blood transfusions damage immunity, and excess iron has been suspected to be one of the causes for this. People who regularly donate blood, on the other hand, have often been found to be healthier than non-donors, and healthier than they were before they began donating.Dr. Ray Peat

What about the interplay between iron and testosterone?

Testosterone actually decreases the level of the iron-regulatory hormone; hepcidin, allowing for more iron to be absorbed from foods. This is one of the reasons why men tend to have higher hemoglobin levels and larger blood volume than women do. It may also explain why anemia patients are more commonly women, and why iron overload is more common in men.

Does it mean that testosterone is bad? Not really, more likely the suppression of hepcidin is just one of the many natural mechanisms that allow men with generally larger frames to have higher red blood cell count and more blood in our veins. After all, one of the easiest ways to end up anemic as a male is to have low testosterone levels.

The younger you are, the better the results (testosterone-wise) you can expect from donating blood. This is because excess iron accumulates in our blood and tissues over the years, and there really aren’t that many effective ways to get rid of it other than frequently donating blood.

If you are an older man who has never donated blood but have always eaten a diet rich in iron, there’s a decent chance that you have excessive amounts of iron in your body which can suppress the function of the hypothalamus, pituitary gland, and testicular Leydig- and Sertoli-cells, resulting in lowered testosterone levels.

There aren’t many studies out there examining the direct effect of serum iron levels on testosterone. One study did show that young boys who were iron deficient, saw significant increases in their T-levels after iron and vitamin A supplementation, which would suggest that iron deficiency is bad for testosterone production…

…But then again, this study of 4303 Chinese males did show that increased levels of the iron transportation protein; ferritin, were associated with lower free- and total testosterone levels. and in animals (boars) higher iron levels correlate with smaller testicular size, which is suggestive of lower testosterone and sperm production. This evidence – coupled with the blood donation studies – suggests that excess iron is also harmful for testosterone production.

How to Maintain Optimal Iron Levels

First and foremost, if you’re a man, there’s a high chance that you DO NOT need iron supplements or have any special need to consume more iron-rich foods.

Typically, the hepdicin-system works well to prevent incidences of overly high or far too low iron levels, unless you have clinically low testosterone levels or iron malabsorption.

Regularly checking for hemoglobin is one way to know that you’re at least getting enough of the mineral, although it isn’t an as effective method for identifying too high levels of iron (in which case blood testing for ferritin would be more accurate).

If you do have low hemoglobin levels and your doctor thinks its because of too little iron in the diet, you should be easily able to get more by adding more iron-rich foods to your diet.

If you’re anemic, it’s best to focus on the following;

For the fellows who need to consume more iron, pairing the iron-rich foods with vitamin C is known to increase the absorption of the mineral. I wouldn’t recommend supplementing with iron unless your doctor specifically instructs you to do so, in which case ferrous fumarate would be the best option.

Now for the likely more common concern for men; how to avoid and reduce excessive iron:

Can anemia cause low testosterone levels?

Answer: Yes. According to the clinical evidence, anemia (low blood iron) can reduce testosterone, whereas low testosterone levels can also lead to anemia, causing a slippery slope where low testosterone may cause anemia, and the anemia can then further suppress testosterone production.

If you or your doctor suspect that you might be anemic, consider adding iron-rich foods to your diets such as liver and meats, eggs, leafy greens, and oysters.

How much iron can I safely supplement with?

Answer: The RDA for iron for an average sized male is 18mg/day. You might need more if you are anemic, but it should be noted that iron becomes toxic at higher dosages. WebMD recommends no more than 40mg per day from foods and supplements.

Iron deficiency is bad for our health and testosterone production, but it’s equally as bad or worse if you have too much iron in your body.

Luckily, there are ways to manipulate your iron levels and for the majority of men, this simply means frequent blood donations, pairing caffeine and calcium with iron-rich foods, and making sure you get enough copper and vitamin E to get rid of excess iron and prevent the damage it can cause.

Donating blood is definitely the key point here, and for many men it can be a real game-changer, especially if you consider the fact that it’s not only a way to reduce excess iron, but also helps you remove other harmful heavy-metals like mercury and aluminum…

…Plus it also helps save lives and is free, so what could you lose?