Milk and many other dairy products have been under some heavy demonization recently. What used to be the favorite go-to health drink of both, the alt-med people and normal people, is suddenly seen as something that barely fits human consumption, and apparently now also destroys your health.

Like always, the truth isn’t as straight-forward as its presented and there are several positive – as well as negative – effects to dairy consumption.

The main component of most dairy products: whole cows milk, consists of;

Based solely on the macronutrient and micronutrient amounts and ratios, whole milk would be close to the ‘optimal food’ for anyone who’s goals include muscle gains and high testosterone levels.

However, with the good there is also some bad: 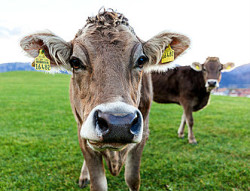 Living my whole life in Finland – which is a country with World’s 2nd highest rate of dairy consumption – I’ve drank a lot of milk on a daily basis for the most part of my life, without ever even questioning about any of its health benefits.

In here, milk is considered a super drink, and if you dare say anything bad about it, prepare for a shit storm of epic proportions.

However, few months ago I started thinking about the effect of milk on testosterone levels. After all it comes out of a cows breasts, and is pretty high in mammalian estrogen.

Would this off-set the pro-testosterone effects of all the macronutrients, minerals and vitamins in dairy products? Could milk actually end up reducing testosterone?

Cows are kept pregnant for upwards of 300 days of the year, and most of the milk on the market comes from these pregnant cows (naturally, as that’s when they produce the most milk). The problem is that the amount of female sex hormones (estrogens) in milk increase when the cow is kept pregnant for longer periods of time. According to a bunch of Mongolian researchers, the milk of a cow that is at the late stages of pregnancy can contain up to 33 times more estrogen than that of non-pregnant cows.

Roughly 60 different hormones can be identified from cows milk (including the various estrogens and their metabolites which everyone are freaking out about, but also testosterone which we all love so much), and according to this study, drinking pregnant cows milk can account to a staggering 60-70% of our endogenous estrogen exposure. Not good news at all…

…To what extent does that affect your bodily levels of estrogen and testosterone?

According to a study published in 2012, milk contains high amounts of estrogens and their metabolites, however they’re almost fully inactivated by the liver and the gastrointestinal tract. Good news huh?…

…Well, not so fast. According to a Japanese study, drinking cows milk results in increased serum estrogen and progesterone levels, which suppressed GnRH secretion from the brain and results in lowered testosterone secretion in men and prepubertal boys during a 21-day study period.

Another study from Ganmaa et al. found out that when Mongolian kids switch their milk into the kind from US, their estrogen levels shoot up. This is likely caused by the difference in milk producing between the countries, in Mongolia cows are kept pregnant for much shorter duration during the lactation period.

Supporting the theory that it would be the exogenous hormones to blame for the possible T-lowering effects of dairy, are these two studies on milks effect on sperm health:

Since the exogenous hormones in milk are fat-soluble, it would make sense that skim-milk would contain lower amounts of exogenous estrogens, and therefore have a ‘not so bad’ effect on sperm parameters and male hormones as full-fat milk does.

Is milk evil? Should you give it up in order to boost testosterone and reduce estrogen? Well it all depends on how important your hormonal health is to you.

If you suffer from high estrogen levels, low T, and/or have man-boobs, it would make sense to reduce the amount of full-fat milk from pregnant-cows, perhaps all together or then switching to skimmed or low-fat alternatives from non-pregnant cows, which contain far less exogenous hormones (but still provide you with the beneficial proteins, calcium, and vitamin D).

As a big fan of the taste and nutritional content of milk, finding these studies was a huge disappointment to me. I still do drink milk and consume dairy products, but I recognize the scientific evidence and have cut down on the amount of full-fat milk and switched it to skimmed kind for lower intake of exogenous estrogens.

NOTE: With the above being said, I did drink full-fat milk for most of my life and turned out hormonally alright 😉 If you keep the big things in check (sleep, sex, exercise, macronutrient ratios, and good amount of vitamins & minerals) drinking full-fat milk from pregnant-cows is not going to ‘destroy’ you hormonally, (though that will be precisely what the fear-mongering alt-med community is now pushing with their new trending hashtag #DitchDairy…)