How to Get Jaw Dropping Six Pack Abs as a Natural

You can have the strongest most muscular abs in the world, but if your fat percentage is over 10-12% it’s highly unlikely that your six-pack shows at all without flexing like a moron.

And that right there is the problem with most men. If only would they be lean, they would have a nice set of abs, but instead of getting lean, they work more on their abs to try making them “pop out”. Of course, this dilemma goes both ways. You can also be extremely lean and have some definition of abs but if you never really train them they will look like shit. As a wise man once said, they’re like big tits on a fat girl, they don’t count.

Abs are not only “hard” to achieve, but also a multi-billion dollar industry. People are fooled daily into buying TV-shop gadgets such as the AbTronic Pro, Sauna belt, and The Ab Flex, not to mention those ridiculous workout DVDs like the 8-minute abs, 100-crunch this, or PX90…

Here’s the real truth about building those jaw-dropping 6-pack abs, and actually being lean enough to make them show.

Know the Muscles you Work With 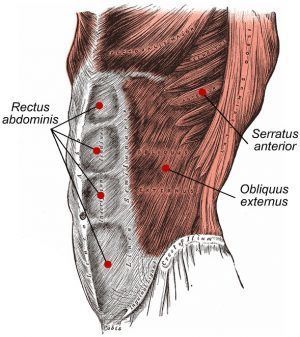 So as said above – the not so secret – secret for building a shredded set of six-pack abs comes down to being lean (not necessarily light, but lean) and also having a balanced & strong set of core muscles directly in the center ab muscles, but also around the core on the sides and deep inside the body.

The main muscles to focus on when building that shredded 6-packer include;

When all of these muscles are trained in a balanced manner and they’re not covered in physique hiding fat-mass, the end result is a shredded core, not only 6-pack, but also that great looking shrink wrap effect from the sides. 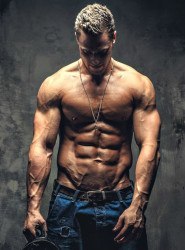 Most people think that heavy squats and deadlifts are all you need to build a good looking strong set of abs, they’re wrong though. Although they’re good for building core strength, abs are not as much involved in these two exercises as people think.

Another misconception often taught in various exercise programs is that abs are different from other muscles and that they require multiple reps to “pop”. This leads to a problem where many guys end up doing hundreds if not thousands of unweighted ab exercises per day and still having nothing to show for it.

Ab muscles grow with same approach as any other muscle of the body, you have to subject them to progressively higher weight week after week. Not to any muscle confusion high-rep pump BS.

With that being said, activating the right muscles with each ab movement can be tricky with too heavy weights, which is why I recommend sticking to a rep range of 8-12 for the majority of your ab exercises. This is somewhat of a “sweet spot” for both, progressive strength gains and mass gains from muscle glycogen store expansion.

Here’s an example of how you would break down an ab workout;

Doing something similar to the above 2-3 times a week should lead to pretty impressive six-pack gains in short amount of time, and ain’t that what most guys seek? Fast way to get a set of 6-pack abs naturally. 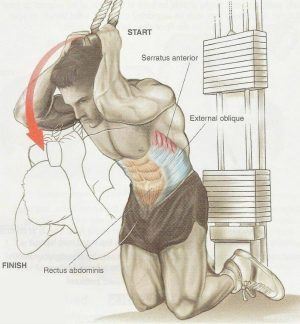 The exercises below are not picked out by random, nor are they personal opinions of what “burns” the most like you would see in most ab training routines.

Instead, they’re movements recommended by elite trainers and studied by EMG (electromyography) to activate the largest amount of muscle mass in just the right spots of the abs for optimal growth, when you combine the exercises with progressively higher weight week-after-week your abs WILL grow rapidly.

As explained earlier in this article, you really don’t need to do high-rep work on these exercises. stick to the 8-12 rep range and when you start repping twelve’s easily, just add in heavier weights to the mix.

Here’s one example of how to use these exercises in a routine (reps/sets, 60-90 second rest between sets);

Ab training is not rocket science, although some people will gladly try to make you believe so, and in the process, they’ll sell you an Ab-Tronic pro training device.

No, but seriously, getting that six-pack is easy in terms of training, the hard part is actually being lean enough to have them show.

This requires a body fat percentage of at least less than 12%, preferably 8-10%, and is sustainable only if you really know what you’re doing.