I’ve seen many fitness ‘experts’ claiming that there’s no such thing as overtraining, or that every guy could lift for 7 days a week, and if they can’t they’re just lazy or unmotivated.

Well, let me tell you one thing that’s for sure. If you workout properly for every single day of the week by lifting weights, then you’re going to overtrain your nervous system, your endocrine system (overtraining testosterone issues are very real), joints, and even your muscle tissue.

Most of the guys who actually say such stuff are on steroids or other forms of PEDs.

And then those ‘experts’ tell to low-average testosterone guys that they should work out 7 days a week doing crazy Hollywood programs and diets.

That’s just plain stupid, and it’ll wreck your testosterone to cortisol ratio all the way to the right making you catabolic and sick.

Note: If you want a complete training system designed to maximize testosterone using just the right amount of training volume and many other T-boosting techniques, then check out the THOR Testosterone Training Program.

Let me tell you this once and clearly: There’s a certain training threshold in your body, and once you go past that threshold then you’re in for trouble.

That threshold varies a lot from person to person, and one key factor that makes the difference is your hormonal profile.

If you have high testosterone and growth hormone levels naturally, then yes, you can work out more without overtraining yourself than someone with low T.

But that doesn’t mean that you can workout everyday. Only people on serious steroids can do that. Hollywood actors, professional bodybuilders, fitness models, you know, all those basic juice heads that claim they workout 2 times a day every single day, eating a 6000 calorie diet.

If you don’t believe me, then go ahead and workout 2 times a day every single day eating a 6000 kcal diet. I guarantee you that if you’re not on roids, you’ll run into overtraining issues and you’ll only get fat.

Here’s some science on overtraining and low testosterone levels:

In the 2007 Journal of Applied Psychology, too much training was shown to wreck the immune system which caused colds and flu-like symptoms for the subjects.

This Spanish study found out that overtrained elite cyclists saw a 50% drop in sperm count, and their testis and pineal gland were also exhausted. Mind you they were also elite athletes, and it took 3 days for the levels to return. When your sperm takes a hit like that, then your testosterone is bound to follow.

Then there’s the final study which showed a significant drop in testosterone, and a nice boost in stress hormone cortisol. Time to exhaustion was also way faster than what it was prior to overtraining. Remember that these problems are not short term, they can last for weeks and weeks if you decide to overtrain.

So as you can see, there’s really a thing called overtraining. If someone still claims that you can lift 7 days a week without running into overtraining, you now know that those guys are full of shit.

How to Avoid Overtraining

Most people monitor their muscles to determine if they should train or not. 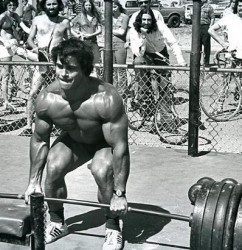 This is a mistake as your muscles will get conditioned to your training pretty quickly, and the muscle aches will vanish at some point.

This doesn’t mean that your body can’t overtrain itself.

Your muscles can feel good and like there’s nothing wrong with them, but the problem of overtraining doesn’t start in your muscles. It’s the endocrine system and nervous system that go out of whack first, and sometimes that’s hard to understand.

1. If there’s no morning wood when you wake up, then something is wrong. Most likely it’s whacked testosterone to cortisol ratio and screams overtraining or hormonal problems like low T.

2. When you’re sure that you’re well rested, put 2 plates on the barbell and lift it up to the level of your pelvis. Keep it there until your grip can’t hold anymore and the bar drops. Take time and see how long did that take.

Then when you believe that you might of have overtrained, put that same amount of weight into that bar and hold it at the pelvis level again. If the time is clearly much worse than what it was when you were well rested, then your nervous system hasn’t recovered yet, and you shouldn’t work out.

Conclusion on Overtraining and Testosterone

So there you go. Overtraining does exist and the threshold to that is different and it varies from people to people.

And if you do find out that you’ve overtrained… Then seriously just take a solid week or two weeks off to begin recovering from overtraining. Let your body rest properly and don’t let that condition go chronic.