6 Physical Signs and Symptoms of High Testosterone Levels in Men

Those are questions that I get asked constantly via email. And the answer is relatively simple:

Almost every physical or emotional trait that reflects masculinity gets stronger and more apparent when a man has high testosterone level. After all, it’s the principal male hormone.

To give you guys a detailed answer, I have made this “signs of high testosterone” list.

Here is the list of 6 physical symptoms of high testosterone:

1. The growth of the Facial and Body Hair 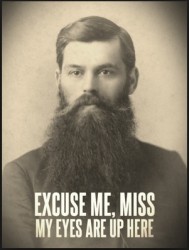 What’s the preliminary reason why men grow a beard and women don’t?

And in more detail, dihydrotestosterone (DHT) which is an even stronger androgen than testosterone is, and is made when this enzyme called 5α-reductase converts testosterone into its more potent form (DHT).

…And that simply is why a beard is one of the simplest signs of high androgens in men.

However, this doesn’t apply to every guy with high testosterone, as there are men who have high testosterone levels, but low 5-a levels, meaning that there’s plenty of testosterone in the blood serum but it doesn’t convert so aggressively into DHT, how well androgens are taken up to the androgen receptors (AR) also plays a role.

Those guys might have high testosterone but probably aren’t equivalent to a hairy gorilla. 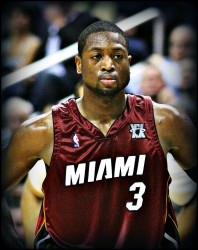 Testosterone and its more potent derivate have been linked to increased bone density and growth.

This is seen especially in the jawbone, where testosterone widens the jawline and creates those sharp edges.

It’s also not a coincidence that when the scientists conduct those tests where they’re trying to figure out if women like feminine or masculine facial traits, the masculine image is always photoshopped so that it has a wider and more angular jawbone.

But quite possibly the clearest example of this is professional athletes in the dollar leagues of the US.

…Just take a look at some of the images from NFL, MLB, NHL, or NBA players before they went to the “big league”, and then a few years after.

It’s easy to spot that in some of the athletes, their jawlines usually grew by inches.

This is most likely caused by synthetic testosterone and growth hormone injections which are far too common in both sports.

NOTE: I’m not saying that all of the athletes in the big buck leagues would use steroids, but it would be inconsiderate to say that it wouldn’t happen at all. HGH for example isn’t even a banned substance in NHL. 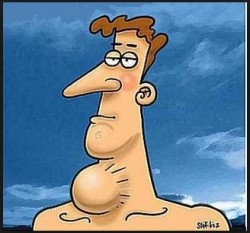 If a man has high testosterone levels during the growth stages of puberty, all of the muscles needed to produce sound, larynx, cartilage, and Adam’s apple grow significantly in size and strength.

…And that’s basically why women don’t have big Adam’s apple’s, they don’t have enough androgens to have one. Or at least to have a protruding one.

I also have a theory that even if you’re well past puberty, testosterone makes a difference in the deepness of voice and in the size of Adam’s apple.

I base this claim on 2 things:

1. I nearly tripled my testosterone levels naturally in 4 years through trial and error, and during that time the size of my Adam’s apple more than doubled (I was 17-18 when I understood enough of natural hormone optimization to make a significant difference in my serum hormone levels, so some of the effects may be due to young age).

2. The women who undergo testosterone injection therapy in order to change their gender will usually grow large Adam’s apples and their voices will convert so that it’s about equivalent to a normal male voice (some get even deeper voices than most men). These changes take place even if the woman (or now man) is well past puberty. 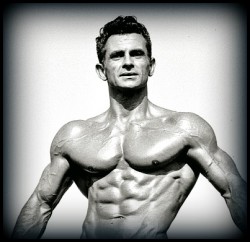 Like I said above, testosterone affects bone growth and maturation, and along with facial bones, it also impacts the shoulder griddle in a similar fashion.

It makes the shoulders wider.

This is due to the fact that the shoulder muscles and bones are both extremely dense in androgen receptors, and if you have high testosterone levels, then you have more of the stuff in your blood serum to attach to the receptors. (by the way, we have a specific training program for optimal AR density training here).

When testosterone attaches itself to the receptor it will trigger the protein synthesis inside the muscle, and when it attaches to the receptors inside bones, it makes them wider, more dense, and stronger.

Thus, one of the symptoms of high testosterone is wide shoulders.

Our testosterone hormonal optimization resistance training program, Thor, can help you increase your androgen receptor density and can help you develop wider shoulders. 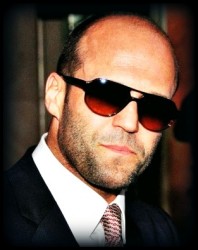 One of the signs of high testosterone may be hair loss, in some men, not nearly in all.

It’s due to the fact that DHT, which is a more potent form of T as explained above, is linked to hair loss.

In some men with the right genes, DHT binds into the hair follicles on top of the scalp, causing them to fall off.

However, this is in guys who are genetically prone to male pattern baldness. I, for example, have both; my testosterone and my DHT levels above the normal reference ranges, but I still have a thick full head of hair.

Basically, if you’re prone to losing hair, you will lose it even if you’d have low testosterone levels, but increased T might accelerate the effects.

However, those drugs work as anti-androgens, blocking testosterone synthesis and the conversion of testosterone to DHT, causing low testosterone and erectile dysfunction in the long term.

6.) The Length of The Ring Finger 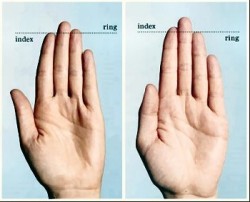 Scientists have recently found out that the ratio between the index finger and pointer finger is linked to the amount of testosterone received in utero and thus another one of the physical symptoms of high testosterone.

If a man has longer ring finger than a pointer finger, then he was most likely exposed to high doses of testosterone in the womb.

However, if a guy has longer index finger than his ring finger is, then most likely there was less testosterone exposure in the womb.

Those were some of the most common physical signs of high testosterone levels in men.

If none of the above physical traits resemble you, then I highly suggest that you check out Testshock and start reading this blog from top to bottom for full understanding on why natural testosterone optimization is beneficial for all guys no matter how old or young they are.