Baking soda (sodium bicarbonate, NaHCO3) is definitely not the first thing that comes to mind when somebody mentions testosterone boosters or performance enhancing supplements. I mean come on, it’s just a white powder that your grandma uses when she bakes cookies and a bag of it costs about $2.

But as weird as it sounds, baking soda, aka. sodium bicarbonate could actually increase your testosterone levels, improve your workout performance, and even make your androgen receptors more sensitive to testosterone and DHT.

Just check this out: 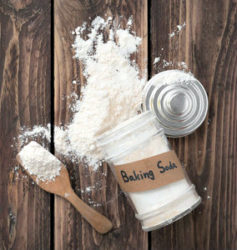 I was completely unaware of the fact that sodium bicarbonate could be used as a pre-workout supplement.

Until I found a bunch of articles about the topic at Suppversity (easily my favorite blog by the way).

The mechanism behind sodium bicarbonates ergogenic effect is somewhat simple: baking soda is a natural pH-buffer, making your muscle cells more alkaline during workouts, which in turn increases oxygen uptake and therefore also performance and strength.

However, the above ain’t everything there is to sodium bicarbonate. Few months after I found out about its exercise performance boosting effects, I decided to look if it would have any effects on testosterone production.

What I found was fairly surprising:

a) In several studies, bicarbonate has been shown to serve as a molecular switch to cAMP (cyclic adenosine monophosphate). In fact, the human body has a mechanism where a compound called secretin is released from the small intestine when the intestinal pH value gets too low (sign of acidity). Secretin then stimulates the release of a watery bicarbonate solution from pancreatic cells, which triggers the conversion from ATP to cAMP. (study, study, study, study).

b) In few in-vitro studies, sodium bicarbonate has been shown to directly activate cAMP in seminal plasma, thus improving the quality and motility of sperm (study, study, study, study).

So what does cAMP have to do with testosterone and why it’s so cool that baking soda could trigger cAMP synthesis?

So, what we have here is a compound which can significantly increase workout performance, and costs about $2 per bag.

Not only that, but sodium bicarbonate more than likely activates cAMP in human tissue, leading to increased testosterone production and androgen receptor activation.

NOTE: If you’re wondering about how much and when you should be taking the baking soda for best results, take a look at this article.