What puzzles me almost daily, is how and why people have seemingly lost their ability of rational thinking. This lack of common sense, is especially true when it comes to sun protection. We are told by so called “experts” that being out in the sun without some SPF 100+ lotion, would cause rapid skin cancer, and also damage our skin.

Yet our ancestors spent a lot more time out in the sun than we do, and didn’t use any sun blockers. They also had significantly lower amounts of skin cancer.

Something is not right with that.

We are out in the sun for significantly shorter duration than our ancestors, and we use more “protective” lotions that block the so called “harmful” sun rays, yet the skin cancer rates have skyrocketed since the invention of sunscreen.

Recent (non-sponsored) research is even more puzzling: according to this European study – which looked at 57 different studies – a continuous exposure to sun rays (note that this doesn’t mean sunburn), significantly reduces the risk of skin cancer (melanoma).

The debate on if sunscreen use is necessary or not to prevent skin cancer is beyond the scope of this article. What I’m going to talk about with you, is the potential testosterone lowering effects of these so called “sun blockers”. 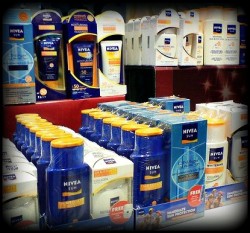 I’ve known for years that the sunscreens on the market are one of the worst possible chemical cocktails you could ever put near your body.

However, I was never too interested in researching the chemicals and their effects before, as I live in Finland, and the sun there is so weak that not even Ron Weasley could burn in its exposure.

But, now that I’m visiting Thailand, I’m more interested in sun lotions and their chemical structure than ever before.

That’s mainly because with my Finnish genetics and pale-ass skin, I would burn to shreds here without applying some sort of sun blocker (imagine going from 13ºF to 95ºF in a day).

Few weeks before the trip, I knew that I had to purchase some sunscreens, but at the same time, I didn’t want to lather myself with endocrine disrupting chemicals daily for 2 weeks

NOTE: the skin is your largest organ and it consists of mostly bi-layer of phospholipids, which are (unofrtunately) very permeable by the chemicals in sunscreens. On top of that, many products contain nano-particles and permeability enhancing chemicals in order to make the lotion “non-sticky”.

So what I did was simple. I wrote down a list of the most common sunscreen ingredients that are known to have hormone disrupting effects, and then I just researched them one by one, to see what kind of effects they could have on testosterone levels. The results (see below) were disturbing.

a) In this in-vitro study benzophenone-1 (BP-1) reduced testosterone levels and the activity of androgen receptors.

c) And then, in this study conducted by Dr. Peter Dingle, the application of three active ingredients commonly found in sunscreens (benzephone-3, 4-MBC, and octyl-methoxycinnamate) for one week, led to a drop in testosterone and estradiol levels in men.

d) In this study, BP-3 metabolites were found to be xenoestrogenic in cultured human cells, even though BP-3 itself didn’t show estrogenic activity in this previous study.

e) Few more studies have also found that benzophenones are anti-androgenic and can block dihydrotestosterone from binding into the androgen receptors (study, study, study, study).

f) The worst thing about benzophenones, is the fact that they’re particularly penetrative. This is caused because they’re the least lipophilic of the most common UV filters, meaning that they can easily absorb through the bi-layer of phospholipids of the human skin and into the bloodstream. In fact, the researchers in this study tested 2,517 patients just to find out that 96.8% of urine samples tested positive for benzophenones. Similar results were seen in this study, where all the 30 adult subjects tested positive for benzophenones.

a) There are few studies which have shown the UV-B filter 4-Methylbenzylidene Camphor (4-MBC) to be a potent xenoestrogen, meaning that it mimics the actions of exogenous estrogen in the human body by increasing estrogen levels and also activating its target receptors. These results have been noticed in both: in-vitro and in-vivo studies (study, study, study).

b) In this rodent study, 4-MBC caused pituitary effects comparable to hypothyroidism (elevated TSH and lower T4 and T3 levels). Note that lowered activity of the thyroid gland is strongly associated with lowered testosterone levels in humans.

c) 4-Methylbenzylidene Camphor was one of the 3 ingredients in the lotion that lowered testosterone levels in the study led by Dr. Dingle (the same one as in benzophenones above).

a) Parabens are a class of widely used preservatives in cosmetics. You can find them in most skin moisturizers, soaps, shampoos, and of course: sunscreens. They induce a very weak estrogenic response in the human body, but are still considered xenoestrogens. The estrogenic activity of parabens increases with the length of the alkyl group, and their estrogenic potency, according to this study, is as follows: butylparaben -> propylparaben -> ethylparaben -> methylparaben.

b) Even though parabens are only weakly estrogenic, many doctors still believe that they can cause problems in the endocrine system, due to the fact that continuous usage causes the accumulation of the compounds inside the fatty tissues (study). I’m not a chemist, nor a doctor, so I can’t really say if you should avoid parabens or not, but personally I don’t like the idea of lathering myself with accumulating xenoestrogens, even if they’re weak.

a) Octyl-dimethyl-PABA (padimate-O) is an UV-B blocker which, according to few studies, is a weak endocrine disruptor with estrogenic activity being slightly less potent than what is seen on propylparaben (study, study). Not much more is known about this chemical hormone-wise other than that, but that’s still enough for me not to put it anywhere near my skin.

a) Octyl-methoxycinnamate (octinoxate) is an UV-filter which caused major concerns back in 2000, when it was shown to be toxic in rats with a dosage that’s about identical with one that you’d get from applying sunscreen. However another study rushed in to conclude that Octyl methoxycinnamate is not that effectively absorbed by the human body.

b) With that being said, the chemical has shown estrogenic activity in cultured human cells and in animal studies (study, study).

c) And Octyl methoxycinnamate was also one of the three ingredients in the lotion used by Dr. Peter Dingle on his subjects to achieve lowered testosterone levels after just one week of application, suggesting that it might disrupt the human endocrine system, even though it’s weakly absorbed (there’s also the possibility that the effect could of have been caused solely by the 2 other ingredients in the lotion (benzephone-3a and 4-methylbenzylidene camphor).

b) And according to the good old Wikipedia: “Homosalate has been identified as an antiandrogen in vitro, as well as having estrogenic activity toward estrogen receptors, and general in vitro estrogenic activity. Homosalate has also been shown to be an antagonist toward androgen and estrogen receptors in vitro. There is also evidence that homosalate (and other UV filters) can break down into more toxic products”

c) Homosolate is also very permeable when applied to the human skin (study).

It might not seem like a big problem, but continuously lathering the chemicals to permeable skin is eventually going to suppress your hormones and can even contribute to carcinogenic disease.

My personal recommendation would be to simply avoid burning, and using natural sunscreen (affiliate link) omitted from the harmful chemicals.