However, in my opinion, Tongkat Ali is not exactly the best testosterone booster out there.

…It might be one of the most popular ones, but the evidence of it boosting testosterone just isn’t clear enough for me. It seems to increase testosterone levels in rats, stressed humans, and humans with low testosterone, but no studies have ever examined its effects on healthy non-stressed non-infertile males.

Here’s what I’m talking about: 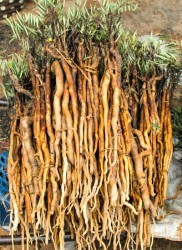 Tongkat Ali is a flowering plant native to Indonesia, Malaysia.

The active ingredients claimed to increase testosterone include steroidal saponins and Eurycomanone. There’s also some aphrodisiac pro-erectile compounds in the herb such as Canthin-6-one metabolites and derivatives of Squalene.

Tongkat Ali has a huge reputation as a pro-erectile testosterone booster and if you’ve been reading any of the men’s health sites of the 20th century, you’ve had to stumble upon the herb few times by now.

But I have a hard time buying all the claims about Tongkat Ali, and quite frankly the market seems to be full of fake products and extracts which are nowhere near the actual herb.

Other things aside, let’s see what the actual science says about this herbal supplement:

a) The researchers at this randomized double-blind placebo study had 109 men as their test subjects. They gave half of these men 300 mg’s of freeze-dried Tongkat Ali extract, and the other half got a placebo. The abstract cites that the study went on for 6+ months.

The results showed that after 12 weeks there was significant increases in semen motility (+44%) and volume (+18%) in the Tongkat Ali Group. The test group also had significantly higher scores in the Erectile Function domain in (IIEF) questionnaire and noted significant improvements in libido when compared to the placebo group.

b) In this peer-reviewed study that appeared in the Journal of the International Society of Sports Nutrition 2013, the researchers had 62 moderately stressed subjects.

They gave half of their subjects a standardized hot-water extract of Tongkat Ali for the duration of 4 weeks, and the other half received a placebo.

Albeit this is the most promising study about Tongkat Ali so far, the effects would still need to be studied more on healthy men with no stress.

c) This study had 76 male subjects who suffered from late-onset hypogonadism (low testosterone). The researchers gave these men 200 mg of a standardized water-soluble extract of Tongkat Ali for the period of 1 month.

d) Aside from the human studies, one in-vitro study has shown anti-estrogenic effects in Tongkat Ali. For example, this study found out that it blocked estrogen more effectively in a petri dish than tamoxifen (a popular synthetic estrogen-blocker).

However, it’s an in-vitro study, which means that the effects may not take place inside the human body. More studies on humans would be needed to validate those claims, but the results are fascinating, to say the least.

The takeaway from the human and animal studies seems to be that Tongkat Ali is a potential testosterone booster that works wonders in men with low testosterone, and men who are battling with “moderate stress”. It was also seen to reduce cortisol levels (the stress hormone) in stressed subjects and it blocked estrogen inside a petri dish.

However none of the studies so far have examined Tongkat Ali’s effects on the hormonal profiles of healthy males, and that definitely leaves a big hole in the scientific matrix of the herb…

So take it with a grain of salt, you might benefit from the herb if you’re under stress or have low testosterone levels, to begin with, but there’s no evidence of it boosting testosterone in healthy men.

And like I said, the market is jam-packed with snake oil salesmen who cash in with products that probably have nothing to do with the actual Tongkat Ali.