Zinc is one of the 24 essential minerals needed for human survival. The human body can’t synthesize its own – nor does it have a storage system for it – so you must get adequate amounts of zinc through foods or supplementation daily.

Zinc is also – up to a certain point – a testosterone booster, which inhibits the aromatase enzyme, thus reduces the conversion from testosterone to estrogen.

Here’s what I’m talking about: 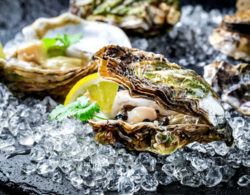 Zinc as I said above, is a testosterone booster up to a certain point.

It increases testosterone levels in healthy men if they’re depleted in the mineral. If your serum zinc levels are already in balance, it’s likely that extra supplementation will not yield any extra benefits, in fact, too much zinc is not a good thing either.

well, you need at least 15 mg’s of daily zinc to even maintain the most crucial endocrine system functions.

Meaning that you should consume lots of oysters and animal-products daily, and on top of that maybe supplement with some extra zinc to make sure that you’re getting adequate amounts of the mineral (zinc, as well as magnesium) evaporates through sweat, so in athletes, supplementation is almost mandatory).

There’s plenty of clinical research backing up the benefits of zinc supplementation.

During strenuous exercise, elite wrestlers who supplemented with 3mg/kg of zinc daily for a month, were found of having significantly higher testosterone and thyroid hormone levels when compared to placebo group which saw steady decreases in both of the hormones due to excessive workload, the likely explanation is that the placebo group lost plenty of zinc through sweating on a daily basis, and their diets weren’t sufficient enough to replace the lost mineral in their bodies. On the supplementation group, however, the trend was not only to preserve testosterone but also to increase both free and total testosterone levels from the baseline at both states; rest and exhaustion.

The same researchers went and reproduced the study with 10 young “sedentary male volunteers” in 2007 using the same dosage of zinc for the same duration of time. The men were subjected to “fatiguing bicycle exercise” during those 4-weeks and as in their previous study, zinc supplementation was able to maintain and increase total and free testosterone levels, as well as thyroid hormones when compared to a placebo pill. These two studies suggest that at least in exercising population, supplementation with zinc is beneficial for hormonal health. Since both of the studies saw improvements in free-testosterone levels, it’s also possible that zinc can inhibit serum SHBG levels and leave more testosterone bio-available for the androgen receptors.

In patients suffering from chronic renal failure (a condition linked to significantly depleted zinc levels), mega-dosing with 250mg/day of zinc was – as to be expected – able to significantly increase serum zinc, testosterone, and LH levels. Another study consisting of 37 infertile-subjects had the men take an undisclosed amount of zinc for 6-months and noted that the men who had testosterone levels on the lower end (less than 480 ng/dL) noticed significant improvements in testosterone and DHT levels, whereas the men on the higher levels of testosterone (more than 480 ng/dL) noted no increases in testosterone, but still significant increases in DHT levels. On an even more positive note, Nine of the subjects were able to conceive a child during the study period.

When it comes to animal and cell-culture studies, zinc administration has been noted to significantly increase testosterone, LH, and DHT levels (study, study), while reducing the activity of the female-hormone estrogen towards it receptors by 57%. Surprisingly enough, one in-vitro study done on isolated cells noted that zinc can inhibit DHT production, however this doesn’t seem to happen when humans take it orally as you can see from the above studies.

Answer: Yes according to the evidence, zinc is likely to increase testosterone levels. This is especially true if you’re deficient in the mineral and/or exercise a lot. In the fortunate case where your zinc levels are already saturated, you’ll probably just see increases in DHT, which isn’t a bad thing at all.

Answer: In isolated cells, zinc seems to block estrogen by reducing the aromatase enzyme which converts the male hormone testosterone into estrogens. No human trials have directly looked at this.

How much zinc can I take?

Answer: Mega-dosing with 100 mg’s of zinc daily has been shown to be safe in long-term studies (2-4 months). However, if you megadose with the mineral, make sure that you’re also supplementing with copper as too much zinc will deplete the body from it. A good rule of thumb is to take them at 10:1 ratio (that means that you take 1mg of copper for every 10mg’s of zinc).

What’s the most bio-available form of zinc to supplement with?

Answer: We at Anabolic Men recommend and use the high-quality zinc picolinate from Thorne Research (affiliate link). Other quality choices would be citrate and orotate.

I’ve heard that calcium should be avoided when taking zinc?

Answer: Calcium, zinc, magnesium, and iron all bind to the same receptors inside the body, however, the receptors can uptake around 800 mg’s of minerals, so unless you’re mega-dosing on all of them simultaneously, you should be fine in terms of absorption.

Every guy interested in natural hormone optimization should be aware of zinc.

It’s the master mineral of the endocrine system. Correcting micronutrient deficiencies is one of the key factors in healthy natural testosterone production, and zinc just happens to be one of the key minerals to make sure you’re getting plenty of.

In my opinion, if you’re not eating a ton of oysters and meat every day, zinc supplementation would be a valid option, and since the mineral is lost via sweat the people who exercise should be extra sure to keep their zinc levels topped…

…And for such purposes, the well-absorbing zinc picolinate supplement from Thorne Research (see link above) should work perfectly. It’s the most potent form with greatest bio-availability, and dirt cheap to supplement with.