1.) Remove Inflammatory Foods.  Your gut is a home to over 100-trillion living microorganisms. A number so big it's hard to comprehend. These organisms have been proven to respond differently to various types of foods, either positively or negatively impacting the gut flora and its protective net-like structure that works as a barrier to prevent harmful particles from entering your system.

Foods to Monitor : Many types of processed grains can be problematic due to containing high amounts of phytic acid (which blocks absorption of certain nutrients), gluten, and lectin (both of which in high doses result in inflammatory response). Polyunsaturated fatty-acids have also been shown to increase tissue oxidative-stress within the gut lining and over time lead to unbalanced gut flora and host of resultant health problems.

2.) Reduce your Exposure to Environmental Toxins. During the last 50 years, our exposure to environmental toxins has skyrocketed. Foods have become increasingly processed and treated with various pesticides to lengthen shelf-life and prevent insects from ruining the harvest. While increased use & production of plastics and other synthetic compounds paves way for the production of more and more chemicals, some of which have toxin-like effects in the body. Many of these compounds were exposed to can have negative effects on gut flora and its protective lining, such as: BPA, phthlates, endotoxin, glyphosate, and antibiotic traces.

3.) Eliminate Chronic Stress. The bodily levels of cortisol increase in response to stress. Chronic stress results in long-term increases in cortisol, which leads to various negative effects, such as: lowered testosterone levels, brain fog, insomnia, and fatigue. One of the less known side effects of stress-induced chronic cortisol excess is its effect on causing intestinal hypersensitivity, otherwise known as increased permeability of the gut lining, or "leaky gut".

4.) Introduce More Probiotics into your Life. In the early 20th century, a Nobel recipient Élie Metchnikoff, realized that poor Bulgarian peasants who lived off of mostly cultured yogurt, lived much longer than expected due to this dietary habit. Fast forward to this day and medical research has proven many times over that the human gut can be populated with healthy bacteria to improve its health and digestion ability, as well as replace the harmful microbes with healthy kind.

Where to get probiotics: The easiest way to populate your gut with healthy bacterial cultures and enzymes is to eat fermented foods, such as: yogurt, cultured cheeses, kefir, Kimchi, Kombucha, Sauerkraut, etc. and to take a high-quality probiotic supplement.

It’s no secret that the supplement industry is a multi-billion-dollar industry... 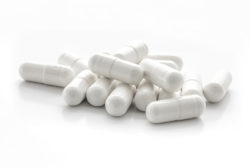 When there is a demand for a product and hungry buyers, the market will be flooded with greedy salesmen.

This is very much true for probiotics supplements.

As more and more research about the beneficial effects of probiotics pours in, more and more people are looking for good probiotic supplements to colonize their own guts with high-quality microbes.

The problem is that many people simply don't know what to look for, and marketers abuse this fact by claiming that their product is the best because it has "the highest amount of probiotics".

In reality, the amount of bacteria is irrelevant.

What is truly important is what kind of bacterial strains the product has! They all have their specific effects in the gut, and some of them are actually more harmful than good.

Instead Of Looking At The Total Number Of Probiotic Strains, Check If The Product Even Has The BENEFICIAL Bacteria

After researching different effects of various strains of probiotics on the health of the endocrine system, digestion, immunity, and even memory, it became more and more obvious that each of the many different microbe strains had their own special little effects in the body.

When I saw studies about one specific strain greatly increasing testosterone levels and boosting sexual health in rodents, I tried looking for a probiotic supplement that would have this type of bacteria in it... Only to be flooded by the "buzz words":

"Our product has 50-billion bacteria!" ...And, "Highest colony-forming unit (CFU) count on the market!"

Who cares? It could as well be E.coli or some other nasty bacteria - even dirt - if the goal is just to ram as much microbes into the capsule as possible.

Instead of total count, you should be looking at strains like these: