Mucuna Pruriens (velvet bean) is an indian bean-like climbing herb that can reach 15 meters in length.

Mucuna is widely used in Ayurveda (Indian herbal medicine) and its usage as a Parkinson’s relief and sexual tonic date back thousands of years. It has also quite a reputation for its effects on increasing testicle size. Recently this herb has gotten the interest of several researchers. It’s due to the fact that Mucuna Pruriens contains L-DOPA (levodopa) which is the precursor for the hormone/neurotransmitter dopamine.

There are several Mucuna Pruriens benefits that have been scientifically proven through supplementation (explained more in detail below), including;

What are the Mucuna Pruriens Benefits? 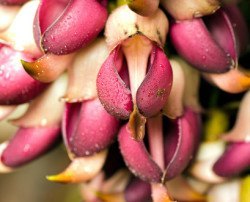 It would be easy to call shenanigans on the claims since natural supplements are often just smoke and mirrors, BUT, the thing is that there’s actually a mounting pile of scientific evidence supporting the use of mucuna. Due to the bean being the richest known source of L-DOPA (levodopa) – and L-DOPA being a precursor to the brain neurotransmitter/hormone dopamine – it has been shown on many trials that the administration of levodopa will quickly convert into active dopamine.

This dopamine boost then accounts to many of the Mucuna Pruriens benefits, as it’s known that increased dopamine can upregulate androgen receptors, suppress prolactin, increase the rate of testosterone synthesis by stimulating GnRH release in the hypothalamus, and even boost growth hormone.

The rest of the benefits, like improved sperm quality and reduced cortisol levels, are likely caused by the high antioxidant activity of the bean.

Most of mucuna’s benefits are in a way or another related to either its high levodopa content or antioxidant profile.

When it comes to the Mucuna Pruriens testosterone benefits, the first evidence came from animal studies. In rats, a pretty high dose of L-DOPA (1000mg/kg) was found to significantly increase the release of luteinizing hormone (LH) from the pituitary gland and lead to higher testosterone levels over 7-14 days. On Japanese Quails (yes, birds) it was shown that when nearly half of their feed is replaced with Mucuna Pruriens seed powder, their testicular activity shoots up, LH levels surge, and testosterone levels are significantly increased. On this third study, high doses of estrogen were administered to male rodents in order to make them infertile and suppress testosterone levels, the researchers then used M.Pruriens to see if it would combat these effects, and the short version is that it did.

In humans, the first study to examine mucuna’s effect on the reproductive system noted that on men with stress-related infertility, 5g/day of mucuna seed powder for 90 days was able to increase the sperm volume by 688% on infertile men, and 32% on non-infertile men (less room for improvement I guess?) serum cortisol levels were also reduced by a staggering -110% on the infertile group and -38% among healthy subjects.

The second study – again with infertile subjects – showed that 5g/day of M. pruriens seed powder for 90 days, increased testosterone levels by 38% on infertile subjects and 27% on healthy subjects, LH was raised by 41% on the guys shooting blanks and by 23% on healthy subjects. As to be expected, sperm quality rose in both groups (more so in the infertile group), semen dopamine levels were elevated, and prolactin (a hormone that suppresses LH release) was down by -32% and -19%.

On the third human study (once again infertile guys) mucuna powder was administered to 180 men, resulting in a 38% increase in average testosterone levels. The fourth L-DOPA testosterone study showed that subjects with Parkinson’s disease can benefit from taking up to 600mg’s of levodopa as it maintains and increases their free-testosterone level when compared to placebo.

More interestingly, the studies done with isolated cells inside test-tubes have been shown that L-DOPA acts as a coactivator protein to the androgen receptors (AR) and enhances their activity in uptaking testosterone and DHT (study, study). So not only can mucuna potentially increase the levels of androgens, but it may also upregulate the receptor sites to better utilize them too. As you can see, there seems to be a lot of Mucuna Pruriens testosterone benefits.

Since L-DOPA can cross the blood-brain barrier and converts into the neurotransmitter dopamine, it’s only natural to assume that it could yield nootropic (brain boosting) effects. And yes, a double-blind placebo-controlled study of 40 participants showed that L-DOPA administration significantly improves the learning ability, speed, and memorization of “pseudowords” during artificial vocabulary test.

We at Anabolic Men recommend a mucuna pruriens dosage of 250-500mg’s with high-quality mucuna pruriens extract (affiliate link) for high yields of levodopa, which seems to be the master ingredient behind most of the seeds benefits. To furthermore enhance L-DOPA conversion to active dopamine, you can stack mucuna with vitamin B6.

There’s a reason why the pharmaceutical industry uses levodopa extracted from Mucuna Pruriens in so many of its prescription drugs. There are a plethora of positive mucuna pruriens side effects. The stuff simply works.

Even though there’s a mounting pile of scientific evidence supporting the benefits, people still seem to prefer buying ineffective supplements like Tribulus or antler velvet (which have time after time proven to be useless) over mucuna.

NOTE: For best results, get cold water extracted mucuna that is high in the actual L-dopa (see link above).