We who live in developed countries tend to take water as granted, and we don’t often stop to think how vitally important it is to nearly all bodily processes. To say it lightly, all of our cellular functions depend on the substance.

Drinking more water – and making sure that you’re always well-hydrated – has a key role in helping the body to burn calories more efficiently, while it helps to utilize fatty-acids more effectively, water also improves cognitive abilities, increases aerobic training efficiency (duh), and even improves your mood.

People often think that they’re drinking enough fluids, but the truth is that most don’t. When the feeling of ‘thirst’ first hits you, your body is already in the state of mild dehydration. Not only that, but chronic mild dehydration is even more common among people who exercise. Men are also much more likely to dehydrate during exercise than women.

Why am I writing about hydration on a natural testosterone optimization website? Well, because your hydration status has a significant effect on your hormones too: 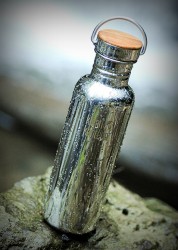 You could spend $40 buying a flashy bottle of ‘latest formulation’ Tribulus Terrestris in beliefs that it will raise your testosterone levels, making your workouts more anabolic…

…Or you could save the $40 and drink some water instead. And that’s because water – unlike Tribulus – actually has some modest anabolic effects. 😉

In fact, before you even consider fiddling around with ANY supplements whatsoever, you should be making sure that you’re drinking enough of water.

a) Even mild (1-2% of body mass) dehydration before and during exercise has been shown to significantly raise the levels of the stress hormone cortisol (study, study). Since cortisol tends to reduce testosterone levels and is made from the same ‘raw building material’ (pregnenolone), even mild dehydration at rest and/or during exercise likely has a testosterone suppressing effect.

b) In this 2008 study, the subjects all completed three identical resistance training bouts in different hydration states (hydrated, dehydrated by ~2,5% body mass, and dehydrated by ~5% body mass), while the researchers investigated various endocrine hormones at rest, during training, immediately post-exercise, and 60 minutes after the exercise. The results showed that dehydration increased cortisol levels significantly, while it also attenuated the normal exercise-induced rise in testosterone.

c) There’s also some evidence that growth hormone levels get suppressed in the state of dehydration (study, study), which is just another reason to drink plenty of water during exercise.