Generally speaking, natural testosterone optimization is pretty simple stuff. Eat right, train right, sleep well, make sure you’re not deficient in any micronutrients, and optimize certain lifestyle factors. Those in most cases will get you well covered.

But then again, there are still some extremely “weird” ways to raise testosterone production. Things that you don’t normally hear about, which however are still scientifically proven to work.

Here’s three of them for you: 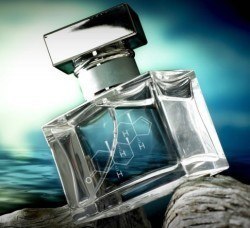 Pheromones are chemicals much like hormones, which humans subconsciously release into the air in response to triggers like sex, fight, joy, depression, anger, and so forth.

There isn’t nearly as much research available for pheromones as there is for hormones, but at least its known that when the scent or smell of the pheromones reaches another member of the same species, their inflammatory system, nervous system, and endocrine system will respond, activate, and in some cases makes the receiver alter their behavior.

The main pheromones identified are;

Unless you’re some “pick-up-artist” guy from the depths of internet, you probably haven’t ever tried those weird pheromone potions and sprays that are sold on various online merchants. And admittedly I have neither, since the whole idea of spraying some sweaty scent on me in hopes of getting laid or something sounds pretty damn ridiculous.

But that doesn’t change the fact that there’s actually research supporting the fact that certain copulins, when inhaled can significantly increase testosterone levels.

Firstly, when women watch a sad movie, then their tears are collected to a piece of cotton and placed under a mans nose (don’t ask me why they decided to test this), the male subjects salivary testosterone levels will drop. The researchers claim that this is caused by the pheromones in tears which have an inhibitory action on testosterone levels and sexual arousal.

Secondly, in a study of 100 young male subjects, 50 men were told to wear surgical masks moistened with copulins, whereas the other 50 wore a mask moistened with control (placebo) solution. Surprisingly enough the guys who wore the copulin masks noticed a 150% increase in salivary testosterone levels when compared to control fellows.

Like I said, this is some weird stuff, but apparently also highly effective. 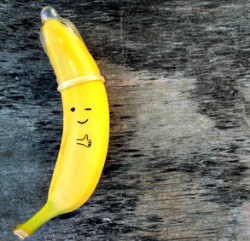 Some guys claim that refraining from ejaculations would “build up” testosterone in your body, and that busting a nut would “drain” the hormone pool.

However this doesn’t seem to be the case, as a bunch of studies have shown that pre- and post-ejaculation testosterone levels are not significantly different (study, study, study).

Even without the studies at hand, this “draining” effect would not make much sense. It’s known that testosterone is removed from the body mostly via urination, not by busting a nut.

Interestingly enough, one study has noted that 3-week abstinence led to a slight increase in testosterone levels, whereas a 3-month abstinence has been shown to suppress T. 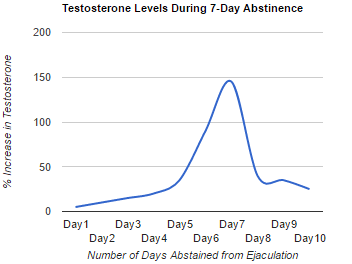 Well what about the 7-day abstinence in the title of this subheading?

You might be surprised to hear that in a Japanese study – on the 7th day of abstinence – testosterone levels were found to spike up by 145% and then return back closer to the baseline on the following day.

Why this happens? Nobody seems to know. It might be an evolutionary cue to reproduce or something completely different, nobody seems to have a definitive answer. 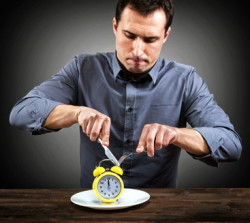 At first you might think that fasting would be horrible for testosterone levels, since you need fat, carbs, protein, and of course a decent amount of calories and micronutrients in order to keep your T producing engine booming.

But the results of studies on fasting have shown us that it takes about 3-days of fasting before testosterone levels start to drop by any significant manner, and not by a surprise this is also the point where metabolic rate finally starts going down (yes, it really takes up to 3-days of no food whatsoever before you get to the dreaded “starvation mode”).

…In fact up to 180% increases in responsiveness to T were noted in a Swedish short-term fasting study.

And that’s the key takeaway. Fasting on the long-term does reduce testosterone levels, but when you do “re-feed” again your body is actually more responsive towards androgens, which causes your receptors to not only uptake more of the good stuff, but also stimulates your body to produce more testosterone. 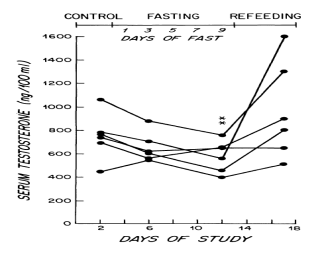 This brings us to the 10-day water fasting study at hand, which somewhat proves the ramblings above.

As you can see from the graph, in nearly all of the guys, fasting lowered testosterone levels, and the drop in T became more and more significant as days went by (although the reductions were not as huge as I was expecting to see)…

…However, once they re-feeded with a measly 1,500kcal/day after the fasting portion of the study, their testosterone levels absolutely skyrocketed and kept going higher and higher for the 5 day follow-up.

There you have it, some next-level whacko ways to boost T. Honestly the last one is the most interesting one and definitely something I was not expecting to see…

…I mean just check that one subject out, he goes from 800ng/dL to ~600 after fasting, and then skyrockets to 1600 ng/dL blasting through the reference ranges in the re-feeding part.

You can read more about these topics on my bigger post about pheromones, ejaculations and testosterone, and you can find everything fasting related from this book.

Want to Increase your Natural Testosterone Production? This Course Teaches You Everything there is to Know about Boosting T-Levels Naturally.
[thrive_leads id=’23621′]