Alcohol is a widely used depressant that we humans most often drink in the form of ethanol. And ethanol – like everyone who has hugged a toilet seat at 4am knows – is toxic for the human body. But just how toxic? How do testosterone and alcohol interact in our bodies? And what kind of effects does it have on the endocrine system?

The magic of alcohol is fairly simple: because it’s a depressant, it slows down various bodily functions, which in turn triggers the feelings of drunkenness.

Alcohol also slows down inhibitions, which is why you might get the feeling of needing to poke everything and everyone around you after 10 shots of tequila…

…Sadly, this mission of having sex with everything that moves can often become impossible, since 10 shots of tequila is enough to dramatically slow down your sexual functions (ie: the battle sword might not rise to the occasion anymore).

This negative effect on the sexual function is mainly caused by a dramatic drop in the male sex hormone: testosterone…

…And here’s why it takes place: 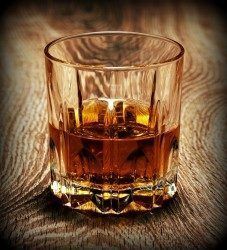 …Since few drinks here and there ain’t enough to cause any dramatic reductions in testosterone. When it comes to alcohol and testosterone, it’s the dose that counts.

However, if you’re an alcoholic, and drinking yourself to the point of passing out on several days of the week, then you can be damn sure that your testosterone production has tanked (and you probably know this yourself already because of the negative effects it has on sexual functioning).

Here are the already known mechanisms of action in how alcohol lowers testosterone:

And here’s some research:

a) It has been noted in several rodent studies that consumption of alcohol lowers testosterone levels significantly (study, study, study, study). One study in particular is rather alarming, since it showed a 50% reduction in testicle size in rats who were fed a diet with 5% of calories coming from ethanol.

Conclusion on Alcohol and Testosterone

As you can see, increasing testosterone naturally and alcohol consumption don’t go hand in hand, as it negatively impacts a wide variety of systems needed in normal endocrine functions.

However, lower dosages are probably fine, and can even increase testosterone levels slightly (I have no idea why). Moderate dosages are not that bad either (see that 7% reduction above).

It’s probably safe to say that 1-3 drinks are not enough to mess up your testosterone production, but anymore than that and the negative effects will start showing up.