DIM (3,3′-diindolylmethane) is a naturally occurring byproduct of indole-3-carbinol (IC3), and IC3 itself is a byproduct of glucosinolate glucobrassicin, which is a compound found in all cruciferous vegetables, such as broccoli, cauliflower, cabbage, Brussels sprouts, kale, and the like.

There has been much discussion about DIM and its effects on the reproductive system. It’s claimed to work by reducing estrogen, while also promoting optimal free-testosterone levels via reduced SHBG (Sex Hormone Binding Globulin). Hence, why many bodybuilders and health-conscious men do consume cruciferous vegetables in hopes of raising T and reducing estrogen.

If you’re active on the “natural hormone optimization” circles, you must have seen recommendations about DIM or IC3 multiple times already.

But the big question is – does DIM or straight on IC3 work as claimed – or are they both just useless? 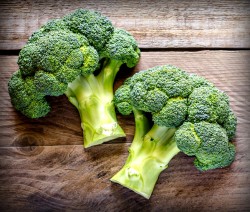 The reason why most people use IC3 or DIM supplements is to reduce their estrogen levels. There’s also some evidence that this could happen.

In particular, IC3 seems to help the liver to metabolize estrogen more efficiently (via upregulating the CYP1A2 enzyme)…

While also simultaneously converting strong estrogen molecules into less potent kind (via downregulation of the CYPB1B enzyme and upregulation of CYP1A2 enzyme). This should result in reduced estrogen levels and a more favorable estradiol/estrone ratio.

In a human study conducted nearly 20 years ago, 6-7 mg/kg of IC3 per day was able to significantly increase the clearance of estrogens via urine in both, men and women.

The supplement industry seems to have accepted the fact that it’s DIM (again DIM is just one of the many metabolites of IC3) that is responsible of these effects, and thus, extracted DIM would work just as well as IC3 or consumption of cruciferous vegetables.

However, one animal study challenges this claim: The researchers from The University of Kansas Medical Center, found out that IC3 and tamoxifen (prescription estrogen receptor antagonist) both blocked estrogen (via different mechanisms), whereas extracted DIM had – even at the highest dose – ” no significant effects on any of the endpoints studied”.

Another study found out that isolated DIM might actually have some anti-androgenic effects in prostate cells, whereas IC3 isn’t known of having such effects.

All-in-all, the evidence points to the direction that IC3 supplements (affiliate link) or consumption of crusiferous vegetables, would be more beneficial for ones estrogen balance than supplementation with the metabolite, DIM.

I have used DIM supplements in the past and I think I have even recommended extracted DIM in this blog before. However, now that I have seen more studies about IC3, isolated DIM, and their effects, I must say that I’m more or less convinced that IC3 and cruciferous veggies are much better of a choice than DIM.

Given that DIM was noted of having anti-androgenic effects in one in-vitro study, it’s possible that IC3 could have similar effects too, which is why you should be monitoring your hormones when taking it.

NOTE: The effective dose of IC3 when used for blocking estrogen in an average-sized male would land in between 400-800 mg’s of IC3 (see preferred supplement above), or about 2-3 pounds of raw broccoli.