Creatine and Testosterone: The #1 Bodybuilding Supplement

Creatine is a natural substance that is present in almost all vertebrates. It’s a key component in skeletal muscle metabolism, and it’s also the most researched and respected bodybuilding supplement out there.

Creatine works simply by increasing the amount of ATP (adenosine triphosphate) molecules inside the cells, which improve the message sending and energy production of them all around the body. Thus, the reason why creatine has such wide range of benefits inside the nervous system, endocrine system, and muscular system.

And when I say that it’s the best and most researched supplement of them all, this is what I mean:

Even though most of the bodybuilding supplements are an utter waste of your time and money, creatine does not belong to that group, not by a chance.

And what’s even better is the fact that creatine powder is extremely cheap. It’s honestly one of the cheapest, yet most effective supplements on the market…

…And that’s because the simplest and also the cheapest form of creatine (creatine monohydrate), has shown to be as effective – or even more effective – than those more expensive creatine forms and mixtures on the market (such as creatine pyruvate, cre-alkalyn, etc). 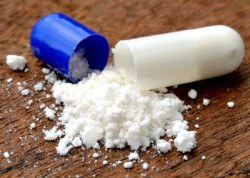 As you can see above, creatine has a wide range of scientifically proven benefits in terms of power output, lean mass, hydration, energy, etc…

…But there’s still one huge benefit to creatine supplementation that I didn’t really mention above.

You see, creatine increases testosterone levels, while also converting it into a more bio-available form called dihydrotestosterone (DHT), which has roughly 3-10 times the potency of testosterone (it’s the strongest androgen in the male body).

Here are some studies:

a) This study examined if creatine would have any positive effects on the skill execution abilities of people who are sleep deprived. On the side, they found out that creatine significantly increased salivary testosterone levels.

b) This study conducted in 2009 showed that after a 7 day loading phase of creatine, followed by a further 14 days of creatine maintenance supplementation – while testosterone levels in blood serum didn’t significantly fluctuate – the levels of more bio-active androgen, dihydrotestosterone, increased by 56% after the initial 7 days of creatine loading and remained 40% above the baseline after 14 days maintenance.

The ratio of dihydrotestosterone to testosterone was therefore increased by 36% after the 7-day creatine supplementation and remained elevated by 22% after the maintenance dose.

The results showed that in the creatine group, testosterone levels and power output increased significantly.

d) This study had 17 men who were doing some serious short-term overtraining in the gym. They were divided into 2 groups, the first one got 0.3 grams of creatine per kg of body weight, and the second group received a placebo.

e) The researchers in this short-term study conducted on swimmers saw that creatine supplementation was able to increase the swimming speed of a 50-meter sprint by 4.6% and testosterone levels by at least 15% when compared to placebo.

f) This study examined the long-term safety effects of creatine. Athletes who had ingested creatine for up to four years were found to have no adverse health effects, but a tendency to increase testosterone levels was noted.

g) In this study, twenty resistance trained males took either 4x5g of creatine per day or the same amount of dextrose (placebo). Their hormones were then examined daily for a week, whilst the subjects trained at days 3, 5, and 7. After the 7-day loading phase of creatine (or placebo), the results showed that when compared to placebo, the creatine group had 17% higher testosterone and -13% lower cortisol levels.

So if we combine the massive amount of evidence that we already have on creatine supplementation, I guess it’s safe to conclude that creatine is pretty awesome. Optimizing testosterone and creatine go hand in hand. It’s a cheap compound that occurs naturally in the human body and has a tendency to increase strength output, testosterone, DHT, cellular hydration, and reduce the symptoms of fatigue…

…On top of all that, several studies show that it’s safe even as a long-term solution, provided that you’re following a proper dosage.

Answer: The most common way to cycle creatine is to go through a loading phase (roughly 20 grams per day) for 5-7 days, and then follows a maintenance phase where you take around 2-5 grams of creatine daily. After some time (usually a month or so) a break (1-2 weeks) is recommended so that the levels of creatine in the kidneys don’t get too high.

Or you can do it as I do: 3-7 grams of creatine daily for a month, then 2 weeks off the stuff completely. Rinse and repeat.

Is there anything else I need to know when using creatine?

And also taking too much creatine can be bad for the kidneys as they can’t function properly when the levels of creatine get out of whack. But this isn’t anything to be scared of, you can kill yourself by taking too many vitamins, water, or even food, it’s basically the same thing with creatine too. Take too much and the benefits will turn to negatives.

What is the form of creatine you recommend?

Answer: Pure creatine monohydrate (affiliate link). The cheapest and most pure form which has shown in studies to be as effective, or even more effective than those expensive creatine modifications that come in flashy bottles with a photo of Ronnie Coleman on the side.

In other words, just buy the pure creatine monohydrate for a boost in testosterone and don’t fall prey for the clever marketing of the supplement industry.

Creatine, in my opinion, is probably the number #1 supplement. I’ve been taking it for years and I can wholeheartedly recommend the stuff to all men, even if they’re not building muscle.

Creatine simply has hundreds of peer-reviewed studies backing up its effects as a testosterone, muscle mass, performance, and strength booster.

So get yourself some cheap and pure creatine monohydrate (affiliate link), and avoid those greedy marketers who try to sell you their special formulations which are only superior in their own wet dreams.